Tyler Perry on The Passion, the Election, and the Oscars Controversy

Tyler Perry participates in a panel for "The Passion" at the Fox Winter TCA in Pasadena, Calif., on Jan. 15, 2016.
Richard Shotwell—Invision/AP
By Daniel D'Addario

On Sunday, Tyler Perry will share his passion with the world.

The actor and director, whose films often touch on explicitly religious themes, digs into his faith with The Passion, a live musical special, airing Sunday night, that follows the last days of Jesus’ life on earth. As host and narrator, Perry joins a cast that includes Jencarlos Canela as Jesus, Trisha Yearwood as Mary, and “Kiss from a Rose” singer Seal as Pontius Pilate; the broadcast will include a procession of extras carrying a cross through the streets of New Orleans.

This live special marks something of a splashy comeback for Perry; though he appeared in the 2014 hit Gone Girl and has been writing, producing and directing his Oprah Winfrey Network series The Haves and the Have Nots, For Better or Worse, and If Loving You is Wrong, he’s been slightly less visible than usual thanks to a two-year hiatus from directing. That changes with the release of Boo! A Madea Halloween in October, and promises to change more radically as the result of what Perry describes as an artistic evolution brought on by the birth of his son.

Perry spoke to TIME about Sunday night’s TV broadcast, the controversy over the Oscars, and whether or not he’ll be making a Presidential endorsement.

What goes into hosting a story of this magnitude? Do you feel the need to put on a little extra gravitas?

For me, I’ve been doing a lot of stage work for a long time. I’m going to do my best, and be myself as much as I can to move the story along.

Talk a little bit about why this is happening in New Orleans.

I don’t know of a better backdrop than New Orleans. This city literally rose again from a liquid grave. So to have the story of Jesus Christ’s suffering and resurrection told in this city, I just thought it was perfect. And that was one of the deciding factors to me saying yes to the project.

Live TV events, from live musicals to this project, seem to be bigger than ever. As someone with a theater background, do you find this exciting?

I do find it exciting. I’m very excited about all of the shows that have come to television, from Grease to The Wiz to The Sound of Music, and now having an opportunity to do this Passion story. We were doing passion plays in church every Easter Sunday. For me, it’s the big kid in me getting a chance to go back to my youth.

Portraying Jesus and Mary onscreen would seem to have its pitfalls. How do you make sure you don’t end up inadvertently crossing a line and offending some of the faithful?

I wasn’t worried about anything other than being true to the actual story in the Bible. And once I read the script, I knew it was accurate, and once I sent it to many pastors and they saw it and thought that it was accurate, I was in. That is what is always important to me, to make sure it is true to the word of God.

Elsewhere on TV, your shows on the Oprah Winfrey Network are incredibly high-rated, more so than anything else on the channel. What, if anything, are the differences in outlook between you and Oprah?

The great thing about working with her from day one is that she is very aware of my audience and my ability to speak to my audience. She’s been to many of my shows, she knows it very well. And I think the brilliance about who she is is clearly allowing me—we talked about it early on, and she said “I just want you to do what you do. You do what you do, and I’m completely fine with that.” And that’s been great to have a partnership and a situation where there is no other expectation, other than for me to be myself. She’s been more than I can say, as far as a boss. We’d never worked together, but it’s been really wonderful; I have absolutely no complaints.

In the age of Empire and black-ish, do you have any aspiration to produce a broadcast TV show?

I tried that early on—I had a show with Chuck Lorre, right before Two and a Half Men we were working on a show. When I found out how broadcast worked, I knew that wasn’t a system that I wanted to be in. I knew that wasn’t something that would work for me. What I found is that the vision I have and the way I speak to my audience is very unique. They know my voice, and that’s why they show up by the millions. To Oprah’s credit, she understands that. To go into broadcast and have that kind of restriction on what’s being said and what the messages are, I know that wouldn’t work for my audience. The stories would not work at all.

In the past, you’ve fundraised for President Obama. Are you planning to endorse this time around?

At this point, I’m watching very, very closely. When I endorsed and got behind him, I was so excited about what was going on in politics—it was fresh, it was new, it was exciting. I’m completely disgusted by what’s going on now. It’s going to be very, very interesting to see what happens here, and who actually ends up running. I’m disgusted by the division and the hatred and the darkness, and, even if I don’t want to endorse, it would definitely make me choose the better side. To play on people’s fears and to speak to division and inequality—I’m disgusted by it.

The two-year break from movie directing you took before the upcoming Boo! A Madea Halloween was sizable, for you. What filled the gap?

Most of that was about my son [Aman, born in late 2014], and adjusting to being a father, and making sure that I had a plan and that we knew each other from birth. But what television provides me as a storyteller is great, because I get to tell the same stories for a long, long time. I just got a cake yesterday from my folks that celebrated 800 episodes of television, which was really shocking to me, because I had no idea it had been that many. Television provides this long line of storytelling, which I really love. I miss film, and even though this is a Madea movie, after working with [David] Fincher, I thought, “Wait a minute, there’s a whole other level here that I need to be paying attention to.” I felt like I went to school, working with him. You won’t be able to see it in Boo!, but in the future, you’ll see it.

I think people would be surprised that someone as hardworking and productive as you took, effectively, a paternity leave.

It was life-changing. And everything that I thought mattered didn’t. This little boy has been my healer. He has completely made me stop and see myself; I see every bit of me in him growing up. And it’s been very important for him to not only be a productive, amazing citizen, but also someone who knows the love of his father, very well and very strongly, no matter where he is and no matter where I am.

In light of the ongoing debate over diversity at the Oscars, do you feel as though any of your movies ought to have been nominated?

I don’t! Here’s my whole thing. I think the Academy should be able to vote the way they want to vote. None of that matters to me. I know there are a lot of people in Hollywood whose work depends on there being changes. But I’ve never been one to knock on the door and say, “Please let me in.” I have always tried to make my own way. I’m not really the person to speak to that because I’m not inside the system asking to be nominated or asking for anybody to pay attention to what I’m doing. What is important to me is the stories that I tell, and making sure they resonate with the audience I’m speaking to. Whether that’s important to anybody else is not really that important to me. I get it, and I completely understand how difficult it is for a lot of people of color to work in Hollywood. I 100% get it. But I do not think change comes from asking people to let you in. I think change comes by becoming owners of studios, owners of projects, owners of content.

In two of your movies, characters contract HIV after misdeeds. How do you respond to criticism of this trope?

I guess you’re talking about Temptation, and my whole thought with that was I think the point was missed. If you focus on the woman contracting HIV after being unfaithful to her husband and I was punishing her, which I’ve heard, I never once thought that. What I thought was, this is a character who was in a movie, and this was her outcome, like it has been for many people. I chose, in that situation, to tell the story. My hope in that was that it was a cautionary tale, where anyone who found themselves in that situation would think first before they threw their whole lives away. That was my point and my purpose. My intention is always from the good, no matter what other people find in it. I know that my intention is always for the good.

Does putting on an elaborate TV spectacular about the life and death of Jesus contradict Jesus’ own teachings about humility?

This may be presumptuous of me, but I think that if Christ were here in this day and age, to get his message across, rather than traveling for three years from village to village when you can get online or the internet, I think he’d be using all these tools. For me, the medium of television is being used to spread this word, and I think it’s all good and all wonderful. It’s going to be great.

What’s a lesson you’ve learned from a project that didn’t connect the way you wanted it to?

For me, I haven’t had anything that has failed. I know that may sound ridiculous, but, for me, even the ones that didn’t do as well as the others at the box office, I haven’t had one that failed in the sense that every one of them was something I was passionate about and felt very good about. If I’m telling the story, if I’m passionate, if I put it out there, and it lives and it breathes and it finds its way, I’ve found success in it. 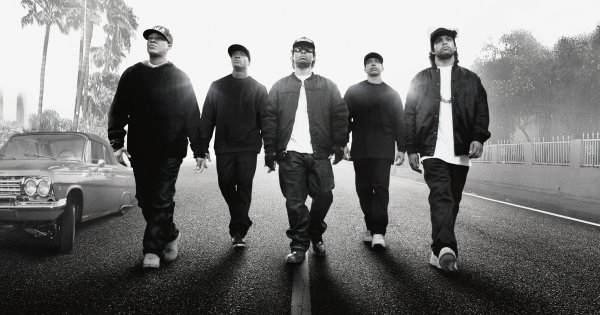 Straight Outta Compton Had Different Trailers For Different Races
Next Up: Editor's Pick