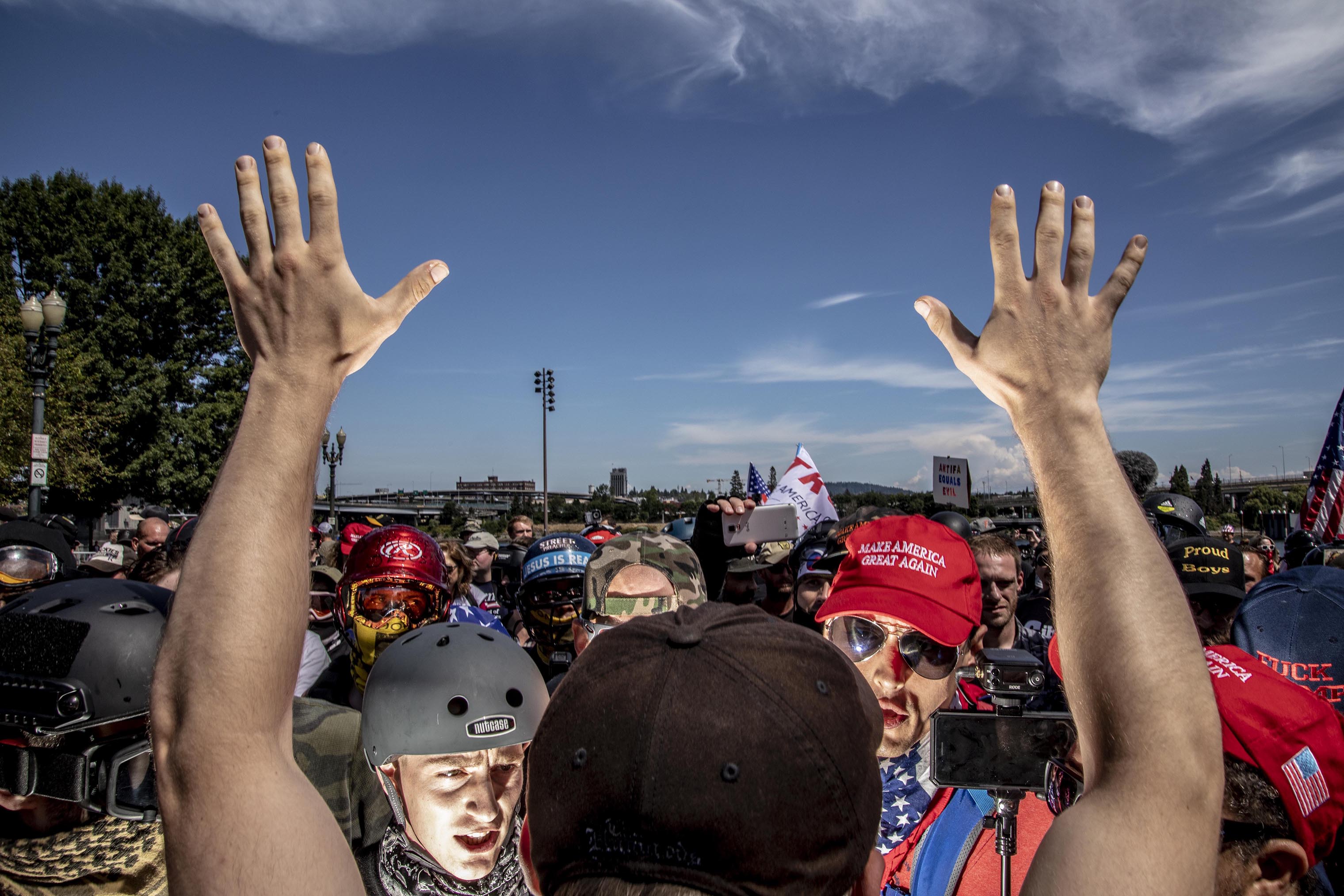 Patriot Prayer, a right-wing group led by Joey Gibson, holds a rally in Portland, Ore., where they were met by anti-fascist counter-protesters, on Aug. 4, 2018.
Mark Peterson—Redux

A Photographer Spent the Year Since Charlottesville Documenting White Supremacists

Charlottesville, Va., blew up a year ago, the tiki torch march illuminating the night skies of Aug. 11, 2017 and street confrontations ending in death the next day. But six weeks before all that, the white supremacist Richard Spencer stood in front of the Lincoln Memorial and was roundly ignored. “There has been an awakening,” Spencer insisted to the cameras assembled around him and the occasional passerby who paused only a moment or two before moving along.

Rival groups fight using rocks and pepper spray after far-right protesters converged to demonstrate against a plan to remove a statue of a Confederate war hero in Charlottesville, Va. on Aug. 12, 2017.
Mark Peterson—Redux
Mr. and Mrs. McDonald pose with a Confederate flag in their hotel room while attending the American Freedom Party and Council of Conservative Citizens conference in Nashville, a conference attended by white nationalist supporters and white supremacists, on June 16, 2018.
Mark Peterson—Redux

“They have Confederate flags and Nazi symbols and they’re just standing there, and nobody’s paying attention,” recalls photographer Mark Peterson, who was among the cluster of media that day. “And six weeks later Charlottesville happened and everybody did pay attention to the same group doing the same thing. It’s just pretty surreal.”

The question when photographing any fringe groups, but especially those that preach hate, is whether you are amplifying a message that would otherwise be lost in the wind, and encouraging an advocate who, left alone, might slink off. But President Donald Trump’s notorious defense of the white supremacists at Charlottesville — “I think there is blame on both sides” — wiped that nuance clean away.

The National Socialist Movement holds a lighting ceremony following a rally that was held in Newnan, Ga., on April 21, 2018.
Mark Peterson—Redux

Under Trump, the question has become how many Americans sympathize in private with the messages a few hundred carry into the streets. An ABC News poll after Charlottesville found 9 percent of Americans, or 22 million people, found it “acceptable” to hold neo-Nazis views. A like number said they support the “alt-right,” as supremacists call their effort to mainstream their agenda.

Left: White Nationalist Richard Spencer holds a news conference at the University of Florida in Gainesville on Oct. 19, 2017; Right: Clothes adorned with the Confederate flag hang in a closet at the Nationalist Solutions 2018 Conference on June 16, 2018.
Mark Peterson—Redux
Attendees at the dedication of the National Confederate Museum in Elm Springs, Tenn., on July 20, 2018.
Mark Peterson—Redux for TIME
Members of the white supremacist organization League of the South, wear 'White Lives Matter' signs during a rally in Shelbyville, Tenn., on Oct. 28, 2017.
Mark Peterson—Redux

“They are totally cognizant of optics, as they would call it,” says Peterson, who spent the next year documenting white supremacist gatherings, including the large one in Portland, Ore., on Aug. 4, and tiny ones that drew massive security and a handful of supporters.

“I have friends I respect who say, ‘You’re just giving them attention they don’t deserve,” Peterson says. “I don’t know how to answer that. I really don’t. I hope the pictures I’m taking show a problem. And I don’t know if my pictures show a solution to that problem. But they show a problem, and I think that’s important, as a journalist, to look at.”