It was a fortuitous 2020 awards season for fans of Brad Pitt and Leonardo DiCaprio — and especially those who enjoy seeing them pal around together.

Thanks to comedic drama Once Upon a Time…In Hollywood racking up nominations at the 2020 Golden Globes, 2020 SAG Awards and 2020 Oscars, the dynamic duo of Brad and Leo was a frequent fixture on this year’s awards circuit. The two starred opposite each other for the first time in the Quentin Tarantino blockbuster, leading to what has seemed like a blossoming bromance between them.

Of course, Pitt and DiCaprio were previously connected by their early roles on the sitcom Growing Pains. Although they never appeared on screen together. “We did start on the same television show,” Pitt said in a July interview with Today.

At the 92nd annual Academy Awards on Sunday, Pitt and DiCaprio hit the town to find out if they had won the Oscars for Best Supporting Actor and Best Actor, respectively. Each already had one Oscar under his belt, with Pitt winning in 2014 for producing Best Picture recipient 12 Years a Slave while DiCaprio took home Best Actor in 2016 for his role in The Revenant.

DiCaprio missed out on a second Best Actor award to Joker star Joaquin Phoenix, but Pitt made sure to shout him out after nabbing his trophy. “Leo, I’ll ride on your coattails any day, man,” he said during his acceptance speech. “The view’s fantastic.”

Regardless of the night’s outcome, it seems as though doing a movie together has allowed Brad and Leo to forge a bond that will stand the test of time. As DiCaprio told the New York Times in May of the close friendship between their characters in Once Upon a Time, “We immediately fell into those shoes. We understood that relationship so quickly that on the first day, we were those guys.”

For now, please enjoy this list of five of Brad and Leo’s most endearing displays of affection for one another.

When Brad and Leo bro-ed out at Cannes

Brad Pitt and Leonardo DiCaprio attend the photocall for "Once Upon A Time...In Hollywood" during the 72nd annual Cannes Film Festival in Cannes, France, on May 22, 2019.
Gareth Cattermole—Getty Images

There’s nothing like kicking off your movie’s critically-acclaimed run by spending some quality time with your costars in the south of France. Pitt and DiCaprio were nothing but smiles while posing together at the photocall for the premiere of Once Upon a Time at the 72nd annual Cannes Film Festival in May.

And their apparent easygoing rapport reflected the comments they made about working on the film with each other.

“I have to say it was incredibly easy — incredibly easy working with Brad,” DiCaprio told reporters during a press conference. “And I think we together forged, hopefully, a great cinematic bond in a film about our industry together.”

“It was really great ease and really great fun,” Pitt added. “It’s that thing of knowing you’ve got the best of the best on the opposite side of the table holding up the scene with you and there’s great relief in that.”

When Brad praised Leo in his Golden Globes acceptance speech

After taking the stage at the 2020 Golden Globes to accept the award for Best Supporting Actor in a Motion Picture, Pitt mused over how much working with DiCaprio on Once Upon a Time meant to him.

“Before The Revenant, I used to watch year after year his costars accept awards and get up and thank him profusely,” Pitt said. “I know why: He’s an all-star, he’s a gent, and I wouldn’t be here without you, man. I thank you.”

When Brad and Leo had adorable nicknames for each other

Thanks to Pitt’s Golden Globes acceptance speech, we know that he enjoys referring to DiCaprio by his initials, LDC. But in an interview with People leading up to the SAG Awards, Pitt revealed that LDC has a bit more of a colorful nickname for him.

When Brad teased Leo about Titanic

While chatting with MTV News alongside Once Upon a Time costars Pitt and Margot Robbie in July, DiCaprio was asked to weigh in on the age-old debate of whether both Jack and Rose could have fit on the door at the end of Titanic.

DiCaprio maintained that he had “no comment,” but Pitt couldn’t resist getting in a playful dig anyway. “Could you, could you have squeezed in there? You could’ve, couldn’t you?” Pitt asked him, eliciting a laugh.

And it didn’t stop there. While accepting his Golden Globe, Pitt once again returned to the subject of the infamous door. “I would’ve shared the raft,” he announced to DiCaprio and everyone else in the audience. The ultimate sign of true friendship.

Pacino likely needed some reassurance that true friendship still exists after — spoiler alert — what happens to his character in The Irishman.

Brad and Leo for life. 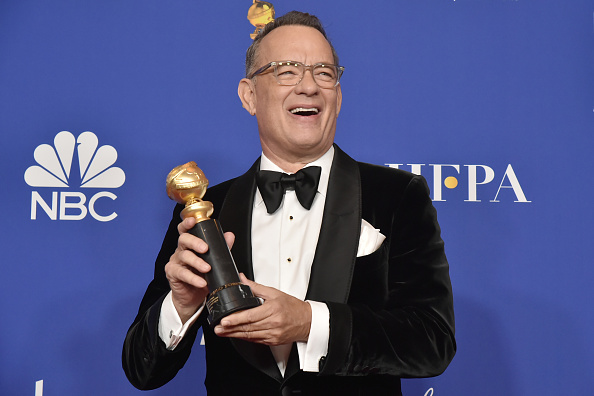 Let's Pause to Appreciate the 6 Most Tom Hanks Things That Tom Hanks Has Ever Done
Next Up: Editor's Pick