The Best, Worst and Most Chaotic Moments of the 2020 Oscars

Just like any great film, the 92nd Annual Academy Awards saved its best and biggest twist for the end. Parasite, the Korean class warfare thriller, pulled out a stunning upset over 1917, sending the crowd into euphoric disbelief. The win capped off a frenzied and unpredictable night that, while filled with questionable decision-making, showed that the Academy Awards might genuinely be making a concerted effort to change.

The awards show stretched three and a half hours; it was, at various points, perplexing, inspiring, hilarious. These were the standout moments of the night.

It wouldn’t be surprising if Academy president David Rubin—sarcastically referred to as “Mr. Excitement” by Tom Hanks during in the broadcast—got a little nervous when Janelle Monáe, after politely tiptoeing through a Mister Rogers impersonation, exploded into a new version of her jittery 2010 song “Come Alive.” Monáe is a consummate professional, but she’s not like your affable hosts of yesteryear: she injected the show with a chaotic and subversive energy, delivering a performance that would be more at home at the freewheeling, flamboyant Tonys.

She referenced #OscarsSoWhite, proudly declared herself a queer black woman, and screamed “come alive” over and over as if casting a spell. But while Monáe was electric, the number’s costumes signaled the beginning of a night of several questionable choices. Monáe herself was dressed as the May Queen from Midsommar; a critically acclaimed movie that was snubbed by the Oscars completely. She was flanked by dancers who wore outfits from Dolemite Is My Name, Us, and Queen & Slim—all beloved black movies that, again, were also ignored. Drawing attention to these non-nominees might have been an attempt at self-awareness—but it mostly just amounted to an epic self-own.

While the Oscars were also hostless last year, it really felt like this time there was no one in charge. Award winners were allowed to drone on for minutes, with the producers seemingly too meek to try to play anyone off—except when the entire Parasite team took the stage to collect the Best Picture trophy. Awards presenters showed up in odd places around the theater: poor George McKay (1917) was banished all the way to the balcony. Some performers, like Randy Newman and Elton John, weren’t introduced at all. And sometimes even presenters got presented: Lin-Manuel Miranda, for instance, got a full WWE-style introduction from Anthony Ramos, in order to…introduce a montage. In a shameless bit of ABC cross-promotion, the Connors showed up to crack some stale jokes. Chris Rock and Steve Martin yelled “vaginas!” in unison. A cameraman literally lost control of his camera while panning over Colin Jost.

But because there was no consistency or thematic cohesion, the show actually became weirdly much more thrilling: it seemed like at any point, anything could happen. The show was a hot mess, with the emphasis on hot. Utkarsh Ambudkar (Brittany Runs a Marathon) delivered a freestyle rap, and was followed by Will Ferrell and Julia Louis-Dreyfus excoriating editors. Rebel Wilson and James Corden batted a microphone stand back and forth for 10 seconds in full Cats costuming and makeup. Eminem showed up to perform “Lose Yourself,” an 18-year-old song, in full, which was bewildering but resulted in a ton of great reaction shots. While not much of it made sense, the show followed Monáe’s command, and came fully alive. And the maximalist, helter-skelter tone only made Parasite’s fourth-hour upset even more climactic.

For at least one rainy night, the biggest star in Hollywood was a 50-year-old filmmaker born almost 10,000 miles away. Bong Joon-Ho, the director of Parasite, made four trips to the Oscars stage, first for more expected wins (Best Original Screenplay, Best International Film) and then unexpected ones (Best Director, Best Picture). Over his decades in the film industry, Bong has shown himself to be a master of wit, comedic timing and suspense—and all of his skills were on display on Sunday. He delivered a heartfelt tribute to Martin Scorsese, acknowledged the historic nature of his win—as the first Korean to ever win an Oscar—and cracked two jokes about how much he would drink after the show. He even created an instant meme, when he gazed at his Oscar and chuckled to himself with gleeful delight.

It wasn’t just Parasite’s Best Picture win that showed the Oscars might actually be opening up to the world. The Academy put an emphasis on internationalism several times throughout the night—including in a pre-taped segment about documentary films, which included Malala Yousafzai and Greta Thunberg, and a speech by Penelope Cruz, who said that foreign films “open a doorway into our minds and hearts.” And when Idina Menzel arrived onstage to sing her nominated song from Frozen 2, “Into the Unknown,” she didn’t sing it alone—she was joined by the other Elsas who had sung the song for the movie’s many non-English versions. The performance acknowledged that for many around the world, Menzel’s version is not the definitive one—and that the unknown for one person may just be someone else’s home.

Presenting awards is a tough gig for comedians, who are often asked to build a rapport with the crowd, deliver pinpoint zingers and pivot to the nominees all within 30 seconds or so. But this year, the Academy ceded control to some of the country’s best comedians, letting them ease into bits and stretch them out. Presenting the Oscar for costume design, Maya Rudolph and Kristen Wiig gave a masterclass in overacting before singing a breakneck mashup of songs about fashion—which was reminiscent of some of Wiig’s best work on “Weekend Update.” Chris Rock and Steve Martin pinballed off each other with their own idiosyncratic sensibilities, with each landing hysterical blows, including Rock’s terse punchline about Jeff Bezos: “Bezos write a check and the bank bounce.” Tom Hanks landed a great roast of Colin Jost. And Keanu Reeves and Diane Keaton got plenty of time to flirt with each other—and the room basked in their undeniable chemistry.

Joaquin Phoenix did not thank a single person in his three-and-a-half minutes onstage after winning Best Actor for Joker. Instead, he used his platform to deliver a speech that was both wide in scope and deeply personal: he tackled injustice, animal cruelty, cancel culture, egotism, and the message of his brother River, who died in 1993. “We believe that we’re the center of the universe,” he said. “We go into the natural world and we plunder it for its resources. We feel entitled to artificially inseminate a cow and steal her baby, even though her cries of anguish are unmistakable. Then we take her milk that’s intended for her calf and we put it in our coffee and our cereal.” It prompted a lot of tweets about alternatives to cow’s milk, and it was a startling and affecting reprieve from a night that too often descends into laundry lists of names. 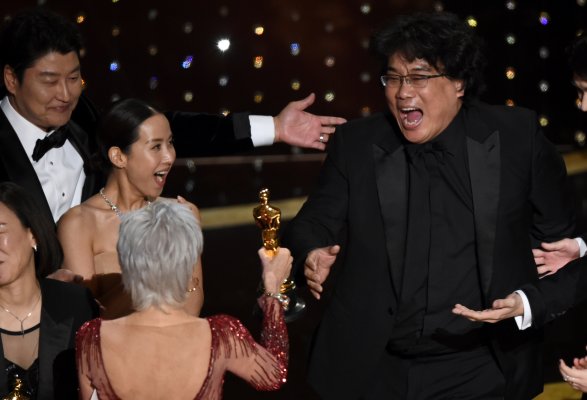