Review: There's Lots of Suffering in The Revenant, But Bear With It

Never has film suffering looked so ravishing as in The Revenant, Alejandro González Iñárritu’s true-life tale of one man’s terrible adventures in unforgiving 1820s Wyoming. Leonardo DiCaprio plays frontiersman Hugh Glass, who suffers a mauling at the meaty paws of an angry mama bear, only to learn that the cruelty of man is much colder. Lord, how he suffers! But beautifully. Blood oozes from the artfully placed gashes in his skin, tiny icicles dangle like molten jewels from his mountain-man mustache, the belly of the fish he’s just caught glimmers gently just before he tears into it with his teeth. Pristine in its grittiness, The Revenant is a hyperrealist Where the Wild Things Are for depressive grownups.

Which is not to say the movie—adapted from Michael Punke’s 2002 novel, itself based on true events—doesn’t have its share of sick, downbeat thrills or visually wondrous moments. It’s just that, by forcing his actors to work under ungodly conditions on location in both Argentina and frigid Alberta, the better to capture the day-to-day desperation of trappers in the wilderness, Iñárritu—director of Birdman, winner of Best Picture at last year’s Oscars—broke a covenant with his performers. When you push your actors to the brink, you’re not directing, you’re just failing to let them do what they do best: Act. Keeping them working in temperatures so frigid they can’t even move their lips, as Iñárritu did, isn’t a method-acting strategy—it’s just brutal.

Still, the cast rallies, surviving even the showiest filmmaking Iñárritu and superstar cinematographer Emmanuel Lubezki can dish out—and they dish out a lot. DiCaprio’s Hugh Glass is a man of principles and fortitude, charged with guiding a group of trappers through the perilous west, his half-Pawnee teenage son Hawk (Forrest Goodluck) in tow. When the men aren’t simply suffering the effects of the elements, they’re in danger of being attacked by understandably angry Arikara warriors—early in the picture, an increasingly tense stretch of serenity is broken when an arrow whizzes through the air, piercing some poor sod’s throat.

One trapper in particular, John Fitzgerald (Tom Hardy), a mean mass of sinew and whiskers, has it out for both Glass and Hawk. After Glass is attacked by that bear—an assault he barely survives—the head of the expedition, Domhnall Gleeson’s stalwart Captain Andrew Henry, unwisely entrusts him to Fitzgerald’s care while the rest of the gang moves on. Jim Bridger (Will Poulter), a sweetheart of a greenhorn, also stays behind, though he fails to prevent Fitzgerald from betraying Glass: after committing one heartless, unforgivable act, Fitzgerald moves on to another, leaving his dazed, bloodied colleague for dead. But Glass won’t be vanquished so easily: He survives a seemingly endless string of gruesome trials (including a DIY neck-wound cauterization), eventually clawing his way back to civilization to wreak his revenge.

The Revenant is supposed to be relentless, though you may find it tiresome, the movie equivalent of tigers circling a tree so single-mindedly that they churn themselves into butter. Lubezki was the cinematographer on Birdman, and in The Revenant, he and Iñárritu engage in yet more feats of DP derring-do. For better or worse, we’re always aware of what the camera’s doing. Lubezki is an astonishingly gifted cinematographer—his better, less-hotdogging work includes Alfonso Cuarón’s Children of Men, a picture of fierce, simmering elegance—but in The Revenant, he’s working overtime to channel the spirit of Terrence Malick, another filmmaker with whom he’s collaborated. There are about ten too many shots of treetops waving listlessly in the breeze, probably intended to symbolize the Isolation of Man or some other graduate thesis topic.

Contrast all that fussiness with the solid, old-fashioned work of acting, which the whole cast of The Revenant stubbornly insist on doing, punitive on-set conditions be damned. And that bear attack, a sequence of vicious, haunting beauty, sure is something: the great brown she-beast charges DiCaprio’s Glass with clumsy fury. All her strength is in her awkwardness—she doesn’t need precision. As she gnaws, shakes and claws at her victim, her noisy snorting and snuffling is a primitive forest symphony. Glass doesn’t go down without a fight, but eventually—minutes later, though it seems like an eternity—he’s reduced to an exhausted, mangled heap.

Yet even in that near-lifeless state, Glass seems filled with life. Later, he comes close to both suffocation and starvation. At one point he guts a dead horse and climbs inside the carcass for warmth. He also gains sustenance by eating buffalo innards. Iñárritu may have fashioned The Revenant as the ultimate endurance test, but as Glass, DiCaprio simply endures. He gives the movie a beating heart, offering it up, figuratively speaking, alive and bloody on a platter. It—he—is the most visceral effect in the movie, revenge served warm. Bon appetit. 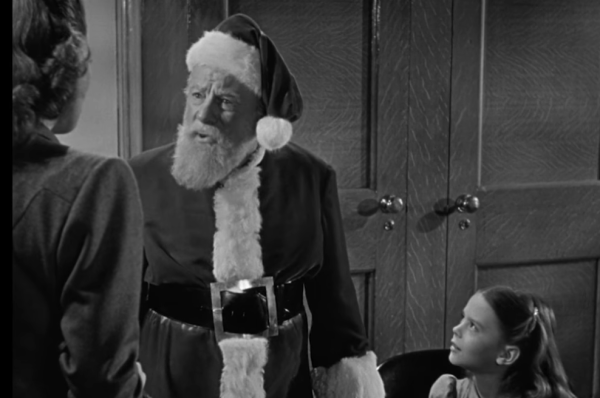 Watch This Supercut of Movie Santas to Get in the Christmas Spirit
Next Up: Editor's Pick