Could Jack Have Fit on the Titanic Door? Let's Examine the Modern Cinema Debate of Our Time Through the Years

It’s been more than two decades since James Cameron’s Titanic hit theaters and the love story of Jack Dawson (Leonardo DiCaprio) and Rose DeWitt Bukater (Kate Winslet) took the world by storm. But even 22 years after the movie’s release, audiences are still debating whether or not Jack could have fit on the door that saved Rose from dying in the icy waters of the northern Atlantic.

As anyone who has seen Titanic knows, the scene in which Jack freezes to death in the ocean after getting Rose safely on top of the door is one of the movie’s saddest. But there are some Titanic fans who feel that that there was plenty of room for Jack to wait to be rescued right alongside Rose.

The question of whether Jack could have fit on the door has sparked an intense debate that continues to this day. During a recent video interview with MTV News to promote his new movie Once Upon a Time in Hollywood, DiCaprio himself was asked to weigh in on the “biggest movie controversy of all time.”

But before we wade into DiCaprio’s response, let’s take a look back at the modern cinema debate of our time through the years.

Kate Winslet offers her hand to Leonardo DiCaprio in a scene from the film Titanic, 1997.
20th Century-Fox/ Archive Photos—Getty Images

Audiences first saw how Jack’s death played out and started to wonder if he could have fit on the door and been saved from an untimely end.

In a series of photos that went viral, Jack fans demonstrated a number of positions that they believed would have allowed both Jack and Rose to comfortably fit on the floating door.

October 2012: The Mythbusters get involved

After the Jack and Rose door meme brought the debate back into the spotlight, Jamie Hyneman and Adam Savage, the duo behind the Discovery Channel show Mythbusters, decided to use an exact replica of the door from the movie to find out for themselves whether Jack’s death could’ve been prevented. At first, it seemed as though Jack had been right about not being able to fit alongside his lady love. But after Savage suggested that they tie Hyneman’s — a.k.a. Rose’s — life jacket to the bottom of the door to reinforce its buoyancy, they both managed to stay afloat.

Contrary to what you might except, famed astrophysicist Neil deGrasse Tyson’s thoughts on the Titanic door scene had nothing to do with the science of the matter. During a 2017 interview with The Huffington Post, deGrasse Tyson revealed that his problem with the scene stemmed from Jack’s half-hearted attempt to get on the door in the first place.

“Whether or not he could’ve been successful, I would’ve tried more than once,” he said. “You try once. ‘Oh, this is not gonna work. I will just freeze to death in the water.’ No, excuse me. No! The survival instinct is way stronger than that in everybody, especially in that character. He’s a survivor, right? He gets through. He gets by.”

The Mythbusters may have completed a successful trial run of the life-jacket-under-the-door theory, but it was a trio of Westminster, Australia students who proved the math behind the idea was valid. According to The Advertiser, Abigail Wicks, Christy Zhang, and Julia Damato’s work even earned them the top spot in the Year 10 section of the 2017 National Maths Talent Quest.

“We looked at how buoyant the door would have been, and how that would have changed if there were people on top of that,” Wicks said. “There was a lot of exploring and testing, and we had to fiddle with different buoyancies and look at what materials were realistic for that time.”

Despite appearing on the Mythbusters episode in which Hyneman and Savage appeared to prove that it would have been possible for Jack to survive, Titanic director James Cameron later told The Daily Beast that the idea that Jack would’ve been able to succesfully tie a life jacket to the bottom of the door before climbing on top was pure nonsense.

“Look, it’s very, very simple: you read page 147 of the script and it says, ‘Jack gets off the board and gives his place to her so that she can survive.’ It’s that simple. You can do all the post-analysis you want,” he said when asked about the infamous door scene. “So you’re talking about the Mythbusters episode, right? Where they sort of pop the myth? OK, so let’s really play that out: you’re Jack, you’re in water that’s 28 degrees, your brain is starting to get hypothermia. Mythbusters asks you to now go take off your life vest, take hers off, swim underneath this thing, attach it in some way that it won’t just wash out two minutes later—which means you’re underwater tying this thing on in 28-degree water, and that’s going to take you five to 10 minutes, so by the time you come back up you’re already dead. So that wouldn’t work. His best choice was to keep his upper body out of the water and hope to get pulled out by a boat or something before he died. They’re fun guys and I loved doing that show with them, but they’re full of s—t.”

By the time 2019 rolled around, Cameron was apparently even more over hearing people argue that Jack could’ve fit on the door. During an appearance on the BBC series Movies That Made Me, Cameron told BBC Radio 1 film critic Ali Plumb that the controversy over the door was besides the point.

“I’ve never really seen it as a debate, it’s just stupid,” Cameron said. “There’s no debate. But if you really want to unearth all the dumbass arguments associated with it…I mean, let’s go back to, could Romeo have been smart and not taken the poison? Yes. Could he have decided not to bring his little dagger just in case Juliet might stab herself with it? Yes, absolutely. It sort of misses the point.”

And now, DiCaprio’s thoughts on the matter. While chatting with MTV News alongside his Once Upon a Time in Hollywood co-stars Brad Pitt and Margot Robbie, DiCaprio was asked whether he thought both Jack and Rose could have fit on the door. DiCaprio understandably replied that he had “no comment,” but that didn’t stop Pitt and Robbie from needling him for a real answer.

“Could you, could you have squeezed in there? You could’ve, couldn’t you?” Pitt asked him.

“Did you mention it at the time? Were you like, should we make the door smaller…,” Robbie added.

DiCaprio, for his part, stuck to his guns. “Like I said, I have no comment,” he replied.

Instead of accepting Jack’s fate, Brad Pitt seems to have grown only more sure in his conviction that his dear pal Leo could have been saved from a watery grave. While accepting the award for Best Supporting Actor in a Motion Picture at the 2020 Golden Globes, Pitt expressed tremendous gratitude for his Once Upon a Time in Hollywood co-star. But he couldn’t resist getting in a good Titanic quip while he was at it.

“Before The Revenant, I used to watch year after year his costars accept awards and get up and thank him profusely,” Pitt said. “I know why: He’s an all-star, he’s a gent, and I wouldn’t be here without you, man. I thank you. Still, I would’ve shared the raft.” 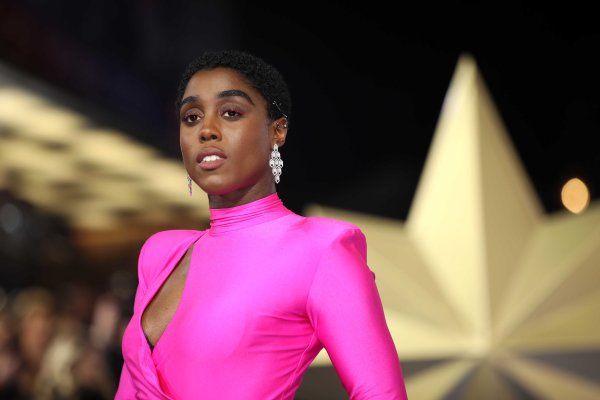 Lashana Lynch Is Reportedly the Next 007. Here's How the New James Bond Movie Can Do Right by Her
Next Up: Editor's Pick