Best New Artist: it sounds like the promise of a career about to take flight.

But for many recipients of this breakout Grammy Award, the label has turned out to be a bittersweet one with a mixed track record of predicting future success — not to mention the burden of expectation it brings. And in the last decade, the award has been subject to shifting eligibility requirements, resulting in a title of dubious value which attempts to measure an artist’s potential while also designating them as part of a secondary class, not necessarily fit for the big leagues.

To add to the confusion: this year, for the first time, two artists — Billie Eilish and Lizzo — were nominated in all the major Grammy categories, including Best New Artist. It begs the question: what does this prize, first awarded to Bobby Darin in 1959 and most recently to Dua Lipa in 2019, really recognize? And who should it be for?

Ultimately, it was Eilish who was the Recording Academy’s choice at the 62nd Annual Grammy Awards on Jan. 26, receiving Best New Artist as well as Song of the Year, Record of the Year and Album of the Year — an almost unheard-of series of wins.

To understand the Best New Artist designation, let’s consider the complex history of the award, and what it all means for this year’s nominees.

What are the eligibility requirements for Best New Artist in 2020?

In 2016, the Recording Academy updated its eligibility requirements for the Best New Artist category “to remove the album barrier given current trends in how new music and developing artists are released and promoted.” In 2019, it expanded the number of nominations to include eight artists instead of five.

The rules currently state that an artist must (1) have released at least five singles or tracks or one album — but no more than 30 singles or tracks or three albums — in their career to date, (2) may not have been entered as a Best New Artist potential nominee more than three times (including as part of a different group) and (3) “must have achieved a breakthrough into the public consciousness and impacted the musical landscape during the eligibility period.” That last point is, of course, subjective. What constitutes a breakthrough? What does impact on the musical landscape entail? That part is up to voters to interpret at their discretion.

The main change this year is that prior to 2019, only five artists could be nominated for the award in a given year. But even before this shift, the eligibility requirements have evolved over time — due in no small part to ongoing backlash over the exclusion of artists like Lady Gaga in 2010. At that point, any artist who had received a prior Grammy nomination was not eligible for Best New Artist consideration. But the rules changed to allow artists like Gaga — who had a Best Dance Recording nomination for her breakthrough 2008 hit “Just Dance” but did not go on to win, and who had not released a full album before the 2010 show — to be able to compete. (The Best New Artist award that year went to Zac Brown Band instead.) Now, artists can be eligible even if they have released as many as three albums, as long as they haven’t won a Grammy for that work.

In other words, the Recording Academy relaxed the eligibility standards to allow for the inclusion of stars whose careers may take more unusual or slower paths to breakout status. The goal: to make sure the winner would be relevant for their ascent in the public eye during the previous year, rather than have the award hinge on technicalities.

This hasn’t always played out in the artists’ favor. One star who benefited from the change was Alessia Cara in 2018. Cara’s debut album had come out in 2015, but it was her 2017 song “Stay” with Zedd and her featured turn on “1-800-273-8255” with Logic that truly put her on the map. But Cara ended up bearing the brunt of a public backlash after her win, with critics confused about how she had nabbed the recognition over very of-the-moment acts including SZA, Khalid and Julia Michaels, who had burst onto the scene in the same year. She ultimately issued a lengthy statement on social media explaining how the award worked and defending her win.

Who are some past winners?

Others have since faded away: Shelby Lynne hasn’t had an album chart since 2011. Evanescence has been nominated for only two Grammys since their 2004 win. fun. has been on hiatus since 2015, and Macklemore and Ryan Lewis also went on hiatus in 2017, with ensuing solo work making a smaller splash. And then there are the women like Trainor and Cara who have struggled to find their place in the pop landscape, even with the Academy’s explicit stamp of approval; Trainor’s record label reportedly sent back at least three versions of her upcoming album until it was satisfied, while Cara’s 2018 album — although generally well-reviewed — debuted at 71 on the Billboard 200.

Last year, Dua Lipa used her time onstage to wryly critique the Recording Academy, noting ironically that female artists had “really stepped up.” (The prior year, then President and CEO of the Recording Academy Neil Portnow had suggested women needed to “step up” to be better represented at the awards.) While Best New Artist has generally skewed female, it was a pointed jab at the rest of the establishment’s choices historically.

Dua Lipa accepts the Grammy for Best New Artist during the 61st Annual GRAMMY Awards at Staples Center on February 10, 2019 in Los Angeles, California.
Getty Images for The Recording A—2019

Who’s on deck this year?

Now that there are eight artists up for the award, there’s a slightly broader spread of recognition across genre and style. But the category still leans toward solo female artists. At 2020’s show, nominees included Billie Eilish, Lizzo, Maggie Rogers, Rosalía and Yola, plus neo-soul duo Black Pumas and Louisiana group Tank and the Bangas. Lil Nas X is the outlier, a rapper and male solo artist. (His inescapable “Old Town Road” made him a necessary fixture in the category.) Rosalía’s presence also marked a historic moment here: the Spanish flamenco-pop artist is the first foreign-language artist to be nominated for Best New Artist. (International stars have regularly been in the mix, and won, but not for projects that are non-English. Rosalía sings primarily in Spanish and Catalán.)

Only a few of these artists are truly “new.” Eilish first became a viral sensation four years ago, via a Soundcloud hit. Lizzo has been recording and releasing music since 2013; 2019’s Cuz I Love You is her third album. Rosalía has been a presence since 2017, but 2018’s El Mal Querer marked her first real crossover into markets beyond Spain. Tank and the Bangas became known in 2017 for an NPR Tiny Desk Concert performance, although their first group album came out in 2013. Yola’s first solo EP came out in 2016, but she was previously the lead singer of British country-soul band Phantom Limb, which debuted in 2008. Rogers initially made her mark with the song “Alaska,” popularized by a YouTube video of a New York University master class, in 2016 — and had self-released two earlier folk-influenced albums starting in 2012 before putting out Heard It in a Past Life in early 2019.

Black Pumas are closer to being a a fresh find; they formed in 2017, and their first album came out in 2019. Lil Nas X is also a true “new” artist, with his astonishing TikTok story, viral rise and debut EP all happening in 2019.

But who had the biggest “breakthrough into the public consciousness and impacted the musical landscape” in 2019? By pure numbers and media saturation, that would skew the result toward Lizzo, Eilish or Lil Nas X, making them this year’s frontrunners.

Where do we go from here?

It’s not novel for an awards show to attempt to anoint the next generation of stars; the British do it too at their version of the Grammys, the Brit Awards. (Recent recipients include Sam Smith, Dua Lipa and Tom Walker.) But we don’t see the same tendency to differentiate rising from established talent in fields like acting; there’s no “Best New Actor” at the Oscars, which evens the playing field for actors of all levels of age and experience. It makes competition fierce, but also arguably more fair. The Grammys already silo different styles of music and types of artists into genre categories; Best New Artist is just one more way they’ve tried to spread recognition, and in doing so, opened up a new set of problems.

If Lizzo had won this year, many would have rejoiced — but some would undoubtedly have grumbled, given the length of her career prior to last year. For Eilish, a win officially marks her leap from viral outsider and ultimate Gen-Z music figure to industry-approved star — which could be a difficult mantle to carry for an artist whose narrative and image are distinguished by her desire to appear different from her pop-star forebears. Lil Nas X would have shared that conundrum, had he walked away with the award.

Either way, the award can feel simultaneously like a blessing and a curse. Getting too much acclaim too soon can add up to serious pressure; even artists like Bruce Springsteen have said that the high expectations that followed early glowing reviews were “a big drag,” while a member of the one-hit wonder group the Starland Vocal Band said that winning Best New Artist in 1977 was “basically the kiss of death, and I feel sorry for everyone who’s gotten it since.” It would be a shame for new artists just discovering their voices to feel the same way, or suffer the same fate. But Eilish may be out of the woods in any case; like many of her fellow nominees, she has discovered success and broken through on her own terms already — even before formal anointing by the Recording Academy.

Who is this year’s Best New Artist?

Toward the end of Sunday night’s 62nd Annual Grammy Awards, the Best New Artist award was finally bestowed on Billie Eilish. A shocked Eilish took to the stage to shout out to the fans for their support and to graciously congratulate her fellow nominees. As Best New Artists go, Eilish is on the younger side at 18, and put out her debut album just last spring. Luckily for her, with her impressive sweep of the major categories — including wins in Record, Song and Album of the Year — there is no doubt that her talent supersedes any sense of beginner’s luck, and her Best New Artist designation only serves to back up the rest of her prizes. 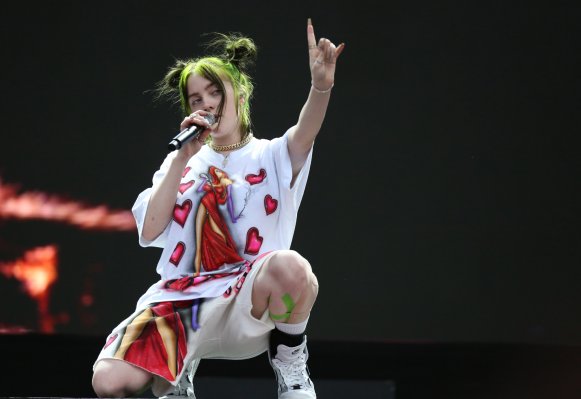 Who Should Win at the 2020 Grammys?
Next Up: Editor's Pick