How The Mandalorian Fits Into the Larger Star Wars Timeline

Warning: This post contains spoilers for the Disney+ Star Wars series The Mandalorian.

Thanks to the convoluted order in which the Star Wars movies have been released over the past 40-plus years, the timeline of events in the galaxy far, far away can be somewhat confusing. So with the launch of The Mandalorian, Disney’s new Star Wars TV series now available on the Disney+ streaming service, TIME is here to break down exactly how the show fits into the larger Star Wars timeline.

What is The Mandalorian about?

The Mandalorian stars Game of Thrones alum Pedro Pascal as a bounty hunter who hails from the planet Mandalor. In the tradition of his bounty hunter predecessors Jango and Boba Fett, the unnamed Mandalorian is a helmeted “lone gunfighter” who wears the traditional armor of his homeland. But that’s pretty much where the similarities end. While fan favorite Boba Fett was a clone raised by Jango who worked primarily for Jabba the Hutt during the Galactic Empire’s tyrannical rule, the Mandalorian operates in the chaotic outer reaches of the galaxy after the fall of the Empire.

“It’s like after the Roman Empire falls, or when you don’t have a centralized shogun in Japan­ — and, of course, the Old West, when there wasn’t any government in the areas that had not yet been settled,” showrunner Jon Favreau (Iron Man, The Lion King) told Entertainment Weekly.

When does The Mandalorian take place?

Favreau has said that The Mandalorian is set five years after the fall of the Empire in Episode VI: Return of the Jedi (1983) and 25 years before the rise of the First Order, the authoritarian regime that is firmly in control of the galaxy when Episode VII: The Force Awakens (2015) begins.

In terms of Star Wars years, Return of the Jedi is set in 4 ABY (after the Battle of Yavin) and The Force Awakens is set in 34 ABY, which means The Mandalorian takes place around 9 ABY. This is a period of time when the New Republic, the democratic government formed by the Rebel Alliance following their victory over the Empire, has only a tenuous hold on the galaxy — especially its lawless outskirts.

According to Favreau, The Mandalorian will explore some of the roots of the First Order. “You come in on Episode VII, [the First Order are] not just starting out. They’re pretty far along,” he told EW. “So somehow, things weren’t necessarily managed as well as they could have been if [the galaxy] ended up in hot water again like that.”

How does ‘baby Yoda’ factor in?

In the closing minutes of the first episode, the Mandalorian discovers that the bounty target that Werner Herzog’s unnamed character hired him to collect is a baby of Yoda’s species. Well, a 50-year-old baby. Where exactly baby Yoda — as fans have affectionately dubbed the big-eared, slow-aging alien — came from is still a mystery, but the fact that there are other members of Yoda’s species in the galaxy far, far away shouldn’t come as too big of a surprise. In the prequel movies, we were briefly introduced to Yaddle, a female Yoda alien. So we know Yoda wasn’t the only one of his kind.

However, considering baby Yoda already has such a big target on his back, perhaps it means that he’s especially Force-sensitive compared to his fellow Yoda aliens. After all, he already managed to use the Force to save the Mandalorian from being killed by a space rhino. 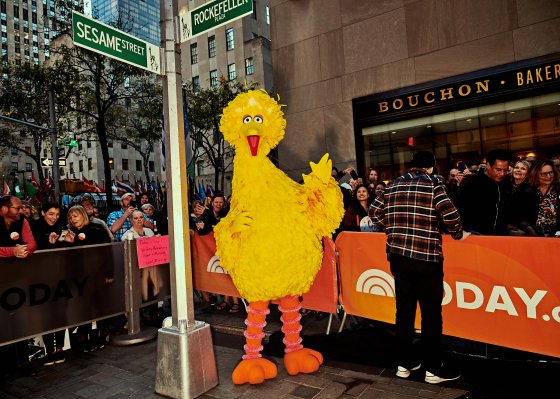 'We're All Growing Up Together': As Sesame Street Turns 50, Big Bird Is Still Making Friends Everywhere He Goes
Next Up: Editor's Pick