Explaining the Difference Between the Mandalorian and Boba Fett

The titular hero in the Disney+ Star Wars series The Mandalorian shares passing similarities with another fan-favorite character from the original trilogy, Boba Fett. They wear the same uniform, and they are both bounty hunters.

But Disney and Mandalorian showrunner Jon Favreau have emphasized that these two men are not the same person. (Sorry, Boba Fett fans.) In its initial release describing the show, the studio distanced this new character from Boba Fett and his father, Jango, who both feature in the films: “After the stories of Jango and Boba Fett, another warrior emerges in the Star Wars universe.”

That doesn’t preclude a Boba Fett cameo though. A brief shot at the end of the fifth episode of the series hinted that the fan favorite bounty hunter may still make an appearance in the show.

Here’s everything you need to know about the difference between Boba Fett and the new, unnamed Mandalorian played by Game of Thrones actor Pedro Pascal.

Boba Fett is not technically a Mandalorian

Yes, both wear the armor of the planet Mandalore. But Boba Fett is not, technically, a true Mandalorian.

Jango Fett raised Boba Fett as a son during the time of the prequel movies. Boba Fett grew up to be a bounty hunter operating while the Empire ruled the galaxy, primarily for Jabba the Hutt.

Boba Fett (spoiler alert) is killed unceremoniously by Han Solo in Return of the Jedi when Solo blindly knocks him into the sarlacc pit, presumably to be eaten by the monster that swallows people whole. (Though there are plenty of Boba fans on the Internet who insist that he survived.)

The Mandalorian played by Pascal is operating at the edge of the galaxy in the years after Boba Fett’s death. After the Empire falls in Episode VI – Return of the Jedi, the galaxy descends into chaos. There’s no stable government in place, and especially in the far-flung regions, a kill-or-be-killed mentality rules. This is when we meet Pascal’s Mandalorian, long before the events of Episode VII – The Force Awakens.

“Our guy is operating in a much more unforgiving landscape,” Favreau told EW. “A place where survival is difficult enough, let alone flourishing in that atmosphere and the politics have dissolved. It’s ‘might is right.’ And how does somebody earn a living when there’s no structure to society anymore and everything is collapsing in on itself? How do you work your way through the world?”

That said, it’s only been five years since Boba Fett supposedly died on Tatooine. That means that the brief appearance of armored boots that don’t belong to the titular hero on that planet in episode five could indicate Boba Fett not only survived the sarlacc pit but is still a bounty hunter.

Boba Fett was a villain. The Mandalorian is more complicated

Boba Fett worked for Jabba the Hutt, one of the major bad guys in the original trilogy. He captures and tortures Han Solo, allows Darth Vader to freeze Solo and delivers the frozen pilot to Jabba. He has no redeeming qualities.

It’s unclear whether the Mandalorian in The Mandalorian will be hero or a villain. Pascal has suggested he will fall somewhere in between. “Ultimately he wants to do the right thing,” Pascal told EW. “But his duties could very much be in conflict with his destiny and doing the right thing has many faces. It can be a very windy road.”

In the early episodes of the show, he decides to sacrifice his standing in the Bounty Hunter’s Guild and go on the run in order to save a baby that belongs to Yoda’s species. He may not have served noble causes before, but with one swift rescue mission he won the hearts and minds of Baby Yoda fans across the Internet.

Plenty of people on the internet are convinced Boba Fett is still alive. And why make a show about a Mandalorian unless you are going to reference the bounty hunter his character seems to be modeled after? There’s the tiniest chance that that Boba Fett will eventually show up on this show, if only to riff on the twin Spider-Man meme. 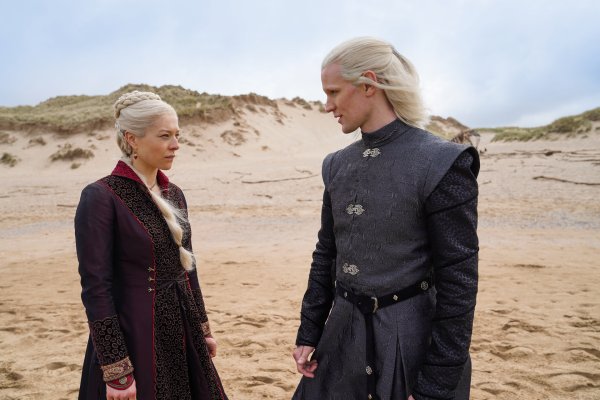 Everything We Know About the Game of Thrones Prequel House of the Dragon So Far
Next Up: Editor's Pick