Warning: This post contains spoilers for the first episode of the Disney+ Star Wars series The Mandalorian.

The Star Wars saga has always been full of twists and turns, from Darth Vader’s “I am your father” reveal in Empire Strikes Back to Kylo Ren’s decision to kill Snoke in The Last Jedi. So perhaps we should have expected the first live-action Star Wars TV series to surprise us. Still, The Mandalorian, which dropped on Disney’s new streaming service Disney+ on Tuesday, took a direction that few critics or fans could have expected.

The titular Mandalorian (played by Game of Thrones actor Pedro Pascal) seems to have few moral qualms when we meet him at the beginning of the first episode. He operates at the edges of the galaxy after the fall of the Empire. (The Mandalorian is set shortly after Return of the Jedi.) The Mandalorian freezes his bounties in carbonite — just as bad guy Jabba once did to Han Solo. And he accepts a sketchy assignment, in exchange for high pay, from a man who presumably is allied with what remains of the Empire leadership, since he is surrounded by Storm Troopers.

Werner Herzog plays the unnamed man who offers our Mandalorian the lucrative job and provides him with scant information about the target: a geolocation and one fact: the target is 50 years old. The Mandalorian arrives at the location in question and finds that an assassin droid has also been commissioned to kill the same target. The two team up to take out dozens of aliens fighting to protect the target. But when they finally reach their mark, they make a startling discovery: The target is actually a baby of Yoda’s species, lying in a cradle. And it’s adorable.

Our Mandalorian turns from anti-hero to hero in one quick moment, shooting the assassin droid in order to save the baby. This decision isn’t all that shocking. In the Star Wars universe, every anti-hero — from Han Solo, who shot first, to Cassian Andor, who did bad things for a good cause — usually turns out to be a traditional, noble softie. We see in flashbacks earlier in the episode that the Mandalorian’s own parents were killed, after which he was left to fend for himself. So of course he would save another orphan.

It’s the baby that’s the true surprise. Dubbing this alien “a baby Yoda,” as much of the internet did on Tuesday, isn’t quite accurate, since Yoda is the name of a specific character, not a species. And Yoda dies in Return of the Jedi, before The Mandalorian takes place. We know little about Yoda’s species — not even the name of his people. But we can presume, because Yoda lived to be 900 years old, that the species ages more slowly than humans: To a 900-year-old Yoda, a 50-year-old alien of his species would, indeed, be a young babe.

We have met one other alien of Yoda’s species in the Star Wars universe: A female alien named Yaddle, who appeared on the Jedi council in the prequel movies. Yaddle was a badass. According to Wookieepedia, she was training to be a Jedi when she was captured, imprisoned and tortured. Her captors eventually forgot about her and left her in a pit for decades. She survived using the Force, fought off a beast using only a stick and eventually escaped.

When she returned home, most of the Jedi Council believed she did not need additional training — since, you know, she survived for years on literally no food — but Yoda thought she was too young. Yoda eventually backed down from this stance, which clearly had as much to do with her sex as her age, and she became a member of the council. She eventually died by sacrificing her own life to save the entire planet of Mawan.

Both Yaddle and Yoda are dead by the time The Mandalorian takes place, which means that this baby could be the last remaining member of their species. It’s unclear as of yet why the Empire wants this baby, but we can venture a few guesses. When the Mandalorian meets Herzog’s character about the bounty, he also meets an over-eager scientist who probably wants to conduct experiments on the alien child. Given that both Yaddle and Yoda were powerful Jedi, it’s also possible that this baby is Force-sensitive, and thus poses a great threat to the Empire.

We don’t hear about any of Yoda’s kin in the new Star Wars movies, so it’s unclear what this baby’s ultimate fate will be. Though perhaps a grown-up version will still show up in Rise of Skywalker, which will hit theaters in December. In the meantime, we will get to watch the fallout of the Mandalorian’s decision to sacrifice a big payday, and possibly his own safety, to save this baby. 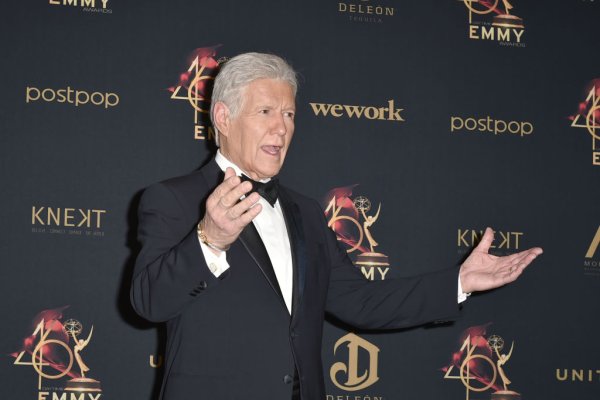 Alex Trebek Got Emotional Over a Heartfelt Final Jeopardy! Answer
Next Up: Editor's Pick