From the Ghoulish to the Glamorous, These Are the Best, Most Outrageous Celebrity Halloween Costumes of 2019

While there are certainly no shortages of Halloween costumes modeled after celebrities and their distinctive styles, celebrities themselves have been getting very into the costume game themselves, dressing to the nines for fall’s most thrilling holiday.

While some, like Halloween legend Heidi Klum, have already gotten into the spirit with spooky designer duds ahead of her annual Halloween bash where she’ll famously debut yet another over-the-top costume, plenty of other celebs have already brought their A game to Halloween festivities. Look no further than new mama Gabrielle Union, who referenced one of her most beloved roles by dressing up as Bring It On cheerleader Isis in a matching costume with baby Kaavia James. Meanwhile, Jessica Biel and Justin Timberlake went meta while making a case for the non-cheesy couples costume with Biel dressing as Timberlake at the height of his boy band fame in *NSYNC, while Timberlake came attired as her microphone.

From the ghoulish to the glamorous, here’s a look back at the best celebrity Halloween costumes of 2019.

Best Mommy and Me costume: Gabrielle Union and Kaavia James

Gabrielle Union and her mini-me, baby daughter Kaavia James, dressed up as Union’s beloved Bring It On cheerleader, Isis.

While Heidi’s probably best known for her labor-intensive over-the-top costumes and fabulous Halloween parties, she showed that she’s great at being spooky in the downtime too – just look at her casual Moschino and Prada Halloween duds.

While couples costumes can easily veer into cheesy territory, Jessica Biel and Justin Timberlake brought the laughs when she dressed up as him during his boy band*NSYNC hey day, while he dressed up as her microphone.

Kylie Jenner’s baby Stormi Webster, was dressed as her mother at this year’s Met Gala in a tiny replica of Jenner’s resplendent feathered Versace gown.

At Gabrielle Union’s very excellent Halloween birthday party, which was “California Love” themed, Ellis didn’t shy away from committing to a costume, going as the legendary DJ Quik, complete with drawn-on facial hair. The costume was so good, it earned a co-sign from the ultimate West Coast icon, the Doggfather himself, Snoop Dogg.

Ashley Graham turned up the heat as animation’s most curvaceous bombshell, Jessica Rabbit.

Most Likely to Turn Halloween into Beauty Con: Demi Lovato

From a stunning Pennywise to a powdered Marie Antoinette, Demi Lovato served face on Halloween.

It takes a tour de force to be able to embody the inimitable Jennifer Lopez, but RHOBH doyenne Lisa Rinna was up to the challenge.

Get You a Girl Who Can Do Both: Halsey

Halsey proved that she could do both goth and glam well this Halloween, channeling Marilyn Manson and Cher in one weekend.

Ciara and Russell Wilson paid homage to their fellow power couple Bey and Jay Z by recreating their looks from the “APESH*T” video. Another Easter egg of a homage to another power couple? The Wilsons replaced the Mona Lisa with a portrait of the Obamas.

Nicki Minaj was a mix of mischief and horror with her very accurate Harley Quinn costume.

Most Likely to Catch Them All: Jhené Aiko

Jhené Aiko’s Ash Ketchum costume was widely admired by all, including her ex, Big Sean, who revealed on Instagram that he was planning a similar costume.

The Hero We Deserve: Luna Stephens

Luna Stephens proved she was the hero we need in an adorable and tiny Wonder Woman costume. 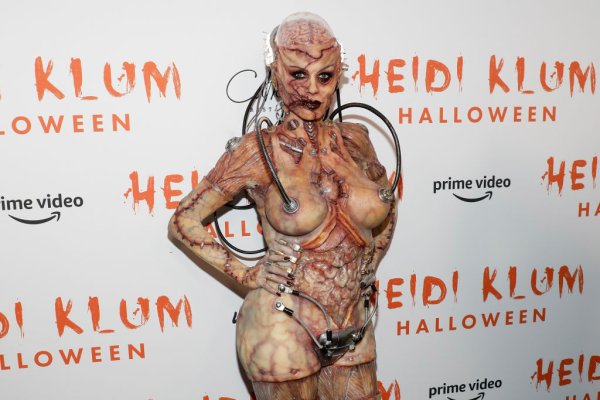 Heidi Klum Slays the Halloween Game Once More
Next Up: Editor's Pick