Another year, another Halloween — and another game-slaying look from Halloween queen Heidi Klum. Klum, the model and former Project Runway host, has become the de facto matriarch of the dress-up holiday after hosting a lavish annual Halloween costume party for 20 years now; 2019 will mark her 20th annual event.

Already this year, she started strong with green hair and a glittery mini dress getup ahead of her festivities at a Halloween bash hosted by Paris Hilton. In fact, Klum was covered head to toe in glitter apparently dressed as a human firework. (Her husband, Tom Kaulitz, seems to have drawn the glitter line at his face.)

On Sunday night, she upped the ante as a ghostly nun doing her best Madonna “Like a Virgin” at yet another Halloween event.

On Wednesday before the big night, Heidi appeared to tease us with a hint.

“Halloween is almost here! If you are in NYC, join me tomorrow at the @amazon store at 7 West 34th Street to watch me be transformed live into a _______! (Any guesses?)” she captioned the Instagram video.

And at last, on Thursday evening — Halloween itself — Klum documented the process of her extensive transformation into a… flesh-exposed corpse of sorts. She went with a full-body suit of a kind of rubbery, flesh-like material that shows intestines and some internal organs, with strategic placement of metal screws and plates to cover certain areas and accent others; her face, meanwhile, was masked by a strangely cracked-and-smooshed-and-stretched prosthetic.

If you’re looking for futuristic gore, Klum has you covered this year.

Last year, Klum took on the role of Princess Fiona in Shrek, transforming into a green ogress for her big night. But that’s not the only impressive look she’s pulled off, even in just the past few years.

In 2017, she went as the werewolf in Michael Jackson’s music video for spooky (and seasonally-appropriate) hit “Thriller.”

In 2016, she recruited a brigade of lookalikes to dress up as her clones, creating quite a stir with her doppelgänger squad.

In the past, she’s also come bedecked as a real-life Jessica Rabbit, a butterfly with elaborate wings and even an aged version of herself. 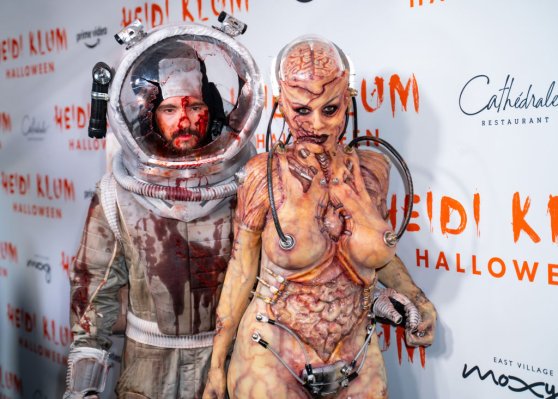 The Best Halloween Costumes Seen at Heidi Klum's 2019 Party
Next Up: Editor's Pick