Justin Timberlake and Jessica Biel as the microphone and N'Sync attend the 2019 Casamigos Halloween Party on October 25, 2019 at a private residence in Beverly Hills, California.
Michael Kovac&;Getty Images for Casamigos
By Rachel E. Greenspan

Jessica Biel is having a lot of fun with her Halloween costume, after the clip of her unimpressed reaction to *NSYNC in the 1990s went viral, by dressing up as husband Justin Timberlake.

At the Casamigos Halloween party in Beverly Hills, Calif., on Friday night, the actor wore a 90s-era Timberlake curly-haired wig, blue sunglasses, a blue metallic jumpsuit, white sneakers and, to top it all off, a giant cross necklace.

Biel’s look seems to be inspired by what her husband, whom she married in 2012, wore to the 1999 American Music Awards. (Luckily for Timberlake, he was not the only member of *NSYNC wearing such a fascinating texture.)

*NSYNC at the American Music Awards on January 11, 1999.
SGranitz—WireImage/Getty Images

Her costume was especially timely given the recent news.

In an interview on The Tonight Show with Jimmy Fallon just a few days before Friday’s party, Biel admitted that she was never a big fan of the men who were arguably the country’s most famous boy-band.

Fallon uncovered a video of the star talking about her disinterest in the group in 1999 — the year from which her Halloween look took inspiration. “I know of them, of course, and I’ve heard of them,” she said of *NSYNC in a 1999 interview. “I’m not a huge fan, but, I mean, cool, I guess.”

Two full decades later, it seems she’s made up for the shade. 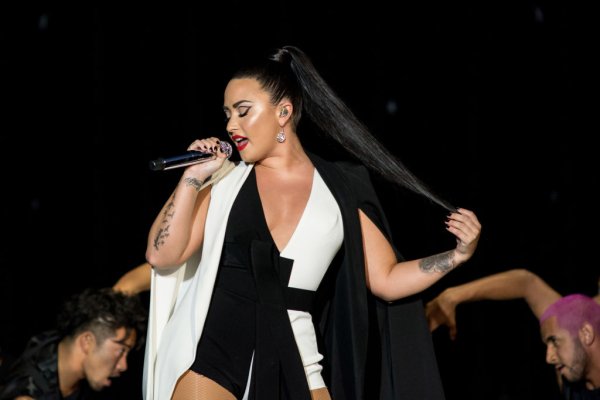 Demi Lovato's Halloween Costumes Hold Nothing Back
Next Up: Editor's Pick