The Best and Most Outrageous Looks of the 2019 Met Gala

With a theme that celebrated the outrageous and over-the top nature of camp as a sensibility, it should come as no surprise that the looks at the 2019 Met Gala were not for the faint of heart, with noted red carpet champs, Lady Gaga, Billy Porter and Celine Dion swanning and showing out at the annual event on Monday night in New York City.

The Metropolitan Museum of Art’s Costume Institute Benefit’s theme, Camp: Notes on Fashion, was inspired by Susan Sontag’s iconic 1964 essay, Notes on “Camp,” which describes the essence of camp as “love of the unnatural: of artifice and exaggeration.” At the Met Gala, this translated to a red carpet filled with over-the-top looks and many a performance art of an entrance. From Lady Gaga, one of the co-hosts of the night, who established her dominion as a camp champ with a flamboyant striptease on the red carpet of four different Brandon Maxwell looks to the inimitable Billy Porter, who showed up in a Sun God-inspired ensemble, carried in on a golden litter by muscled attendants, this Met Gala was one for the books.

Here, we’ve done best dressed people at the 2019 Met Gala — and given awards for each. Read on to see who scored big on this year’s Met Gala red carpet.

While over-the-top fashion was par for the course at the 2019 Met Gala, for red carpet MVPs Lady Gaga and Billy Porter, Met Gala fashion was also a vehicle for performance art.

Lady Gaga attends The 2019 Met Gala Celebrating Camp: Notes on Fashion at Metropolitan Museum of Art in New York City on May 06, 2019.
Getty

Gaga, one of the co-hosts of the night, vamped on the red carpet in not one, not two, not three, but four different looks by Brandon Maxwell, which she alternately shed and donned as part of a playful routine that included a wagon full of champagne, dancers, umbrellas and a flirty striptease.

Meanwhile, Billy Porter confirmed his red carpet reign with a regal, opulent look from the Blonds that appeared to be inspired by a sun deity. The outfit consisted of an embellished catsuit, 10-ft wings and a 24-karat gold headpiece — casual! His royal status was only heightened by the fact that he was carried in on a black velvet and gold litter by six chiseled and shirtless bearers.

For most stars, the camp theme might have been a foreign or daunting concept. Not so for Katy Perry, whose Met Gala looks every year are usually campier than a John Waters movie; Bette Midler, the veritable patron saint of all things camp; or Joan Collins, a camp icon so legendary, she basically showed up as herself to the gala, much to the delight of Dynasty fans (and everyone else).

Katy Perry attends The Met gala celebrating the opening of the "Camp: Notes on Fashion" exhibition on Monday, May 6, 2019, in New York.
Charles Sykes—Invision/AP

Perry’s look for the 2019 Met Gala, as the kids say, was “lit” — but literally. Dressed in a Moschino chandelier-as-dress designed by Jeremy Scott that was actually illuminated, Perry’s trademark campy style was in full effect on the red carpet. How she was able to sit for the dinner, however, remains a mystery.

Bette Midler, ever a camp queen, showed up for the Met Gala red carpet in a glamorous remix of her Hocus Pocus character, Winifred Sanderson.

Collins referenced her iconic looks on Dynasty when she showed up on the 2019 Met Gala with Valentino designer Pierpaolo Piccioli, who designed her voluminous white feathered gown.

For Kacey Musgraves and Jared Leto, the 2019 Met Gala camp theme wasn’t just something they were considering with their outfits, but their full looks — which is why both showed up with some scene-stealing accessories.

Musgraves, who’s already shown us she’s a camp MVP in past red carpet appearances and on her hilarious Twitter account, made for a perfect Moschino Barbie doll, complete with a blonde wig — and a matching pink convertible, quite possibly the most on-theme accessory that’s ever shown up to a Met Gala.

Leto, on the other hand, took self-love to the next level when he toted along a replica of his own head to pair with his rich red Gucci ensemble and crystal harness, an obvious nod the Gucci A/W 2018 runway.

RuPaul and Tiffany Haddish made the case for suits, camp-style when they both appeared on the Met Gala red carpet in suits that were anything but business casual.

While Ru has famously said that “we’re all born naked and the rest is drag,” the world’s most famous drag queen chose to appear at the Met Gala in a rainbow-colored suit with a fun Zebra-inspired sleeve embellishment.

Tiffany Haddish’s sparkling Michael Kors zebra print tuxedo suit and tiny feathered fedora weren’t the only reason why she caused waves of excitement on the Met Gala red carpet; the comedian shared that she had brought some chicken in her bag this year because last year, as she told People, “it was not enough food!”

Camp’s flamboyant nature is no stranger to drama and nothing says drama quite like a cape — at least, that’s the conclusion that we came to after seeing the sweeping, show-stopping looks on Vogue editor Hamish Bowles, Ryan Murphy and Florence Welch.

Bowles’s magnificent Maison Margiela cape was edged with multi-colored feathers and featured a pattern that made him look like a psychedelic dandy — a style concept that was driven home with his rainbow-colored hairstyle.

Murphy opted for a Liberace meets Elizabeth I realness with a crystal and pearl embellished Christian Siriano cape in a warm rose gold shade that featured an impressive ruff; Murphy styled the look with a matching vest, bow tie and trousers.

For Florence Welch, fantasy was the stuff that her camp dreams were made of when it came to her dragon-inspired embellished Gucci cape.

When it came to headwear at the Met Gala, these ladies topped it off. While Dion’s metallic fringed romper could have stolen the show, her towering, spiky headpiece stole the show. Meanwhile, Janelle Monae, never shy about making a statement on the red carpet, obviously lives by the motto that more is more.

According to Oscar de la Renta, the design house responsible for Dion’s glamorous ensemble, the look is made up of 18 panels that were hand-beaded by 52 master embroiderers over the course of over 3,000 hours. The final piece weighs over 22 pounds.

Janelle Monae wears multiple hats as a singer, songwriter, actress, and producer, so perhaps it should come as no surprise that this surrealist Christian Siriano ensemble (complete with a eye that winked) and four-hat headpiece was how she rolled up to the 2019 Met Gala.

One to Watch: Cardi B

Cardi B stopped traffic last year when she showed up pregnant in a Moschino Catholic Madonna-inspired look; she’s since proven that her fashion prowess is no fluke, with savvy, fashion heavyweight style choices that include vintage Mugler couture and Gareth Pugh. She further confirmed that she’s got real potential to give Met Gala MVPs like Rihanna a run for the money when she showed up to this year’s gala in a perfectly on-theme, very dramatic Thom Browne gown with a matching headpiece.

Ezra Miller and Michael Urie were not only perfectly on-theme, but they brought a true sense of fine art appreciation to their looks, drawing on influences and themes seen in artists from Dali and Man Ray to Cézanne and Frida Kahlo.

Miller’s surrealist dandy look, which was Burberry by Riccardo Tisci, commanded that all eyes were on him on the Met Gala red carpet, drawing to mind the work of Dali, Man Ray and Magritte.

Michael Urie’s whimsical Christian Siriano look spoke to the duality within us all, hearkening to the legacy of gender exploration in the portraiture of Cezanne and Frida Kahlo. 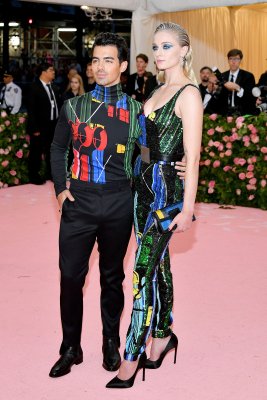 Game of Thrones' Sophie Turner Is Ready for a Throne of Some Kind at the 2019 Met Gala
Next Up: Editor's Pick