Disney Has Reshaped the Movie Industry. Will Disney+ Do the Same for Television?

The Walt Disney Company reminds me a bit of the Blob, absorbing every profitable, halfway wholesome entertainment brand—ABC, Marvel, Pixar, Lucasfilm, most of ESPN and, earlier this year, all of 21st Century Fox—that crosses its path on a journey to world domination. And never has the mega-corp’s enormous influence over pop culture been more striking than it was last weekend, as news from the 2019 edition of Disney’s biennial fan expo D23 dominated headlines. Even amid updates on Star Wars: Episode IX, the Frozen sequel and the slate of upcoming Marvel movies, the slew of announcements about the company’s much-anticipated, soon-to-be-launched streaming service Disney+ felt like the convention’s biggest takeaways.

Debuting Nov. 12, Disney+ will offer thousands of family-friendly movies and TV shows from Disney proper, Pixar, Marvel and the Star Wars franchise, along with new Fox acquisitions, National Geographic and The Simpsons. At an initial cost of $6.99 per month or $69.99 per year—for a subscription that will allow simultaneous streaming on up to four devices, with the option to download content for offline viewing and no additional charge for 4K video—the service easily undercuts Netflix, whose monthly options range from $8.99 to $15.99. A bundle including Disney+, ESPN+ and ad-supported Hulu (whose library contains thousands of new and old TV shows, of which Disney recently became the sole owner) will go for $12.99. Yet it isn’t the affordability that suggests the service will be an instant hit as much as its lineup of original programming that capitalizes on the company’s ultra-valuable trove of intellectual property. Just as viewers are getting used to the constant onslaught of Peak TV, the entry of Hollywood’s most powerful player into the streaming space threatens to reshape television in the image of our current Disney-dominated movie landscape.

Though news about the Disney+ pipeline has been trickling out since early 2018, D23 offered the most panoramic view to date of what we can expect. Along with a first glimpse of the extremely expensive-looking Star Wars series The Mandalorian, one of a handful of original programs that will be available the day the service launches, the expo brought the announcement of three new Marvel shows (Ms. Marvel, Moon Knight and She-Hulk) and an Obi-Wan Kenobi serial starring Ewan McGregor. They join a stable of other offerings from both universes, as well as Disney+ originals including a live-action Lady and the Tramp, Monsters, Inc. spinoff Monsters at Work and the preposterously titled High School Musical: The Musical: The Series. The few projects that aren’t part of a franchise, like The World According to Jeff Goldblum and Gina Rodriguez’s Diary of a Female President, created by the team behind Jane the Virgin, seem to be relatively low-budget experiments built around the appeal of stars with preexisting audiences.

In other words, Disney’s slate of straight-to-streaming titles looks a whole lot like its slate of major motion pictures—one that, for 2019, features three live-action remakes of Disney animated films; three installments in the Marvel Cinematic Universe (including Spider-Man: Far From Home, a co-production between Marvel Studios and Sony); sequels to Frozen, Toy Story and Maleficent; and Star Wars: The Rise of Skywalker. With a few of these still to come, Disney is already responsible for the six top-grossing movies of the year. Disney also now boasts 15 of the 25 biggest domestic box-office hits ever—all but one of them released since 2012, when the first Avengers hit theaters.

I’m hardly the first to notice that the company’s M.O. is to maximize its profits with franchises innocuous and escapist enough to not only satisfy the whole family, but also rack up tons of additional earnings in an international market where some countries censor R-rated content or political commentary. And it’s no mystery why Disney would want to use the same approach to expand that worldwide viewership into the streaming sector; the plan is to launch Disney+ in the U.S., Canada, the Netherlands, Australia and New Zealand in November, then roll it out in more countries over the next few years. The question worth puzzling through is: What happens in the very likely event that Disney can use its winner-take-all strategy to make as big an impact on television, and home media in general, as it has on the past decade of studio filmmaking?

The relationship between movies and TV has always been both complementary and competitive. From cable to big-screen TVs to streaming, advances in home media are often understood as threats to the cinema. But conglomerates including ABC parent Disney and, increasingly, franchises like Marvel tend to have one foot in each industry. In the 21st century, that interplay has movie studios racing to create costly spectacles—screen-filling action sequences, immersive alternate worlds, 3D, RPX—that demand to be watched in the theater, with Disney and its subsidiaries increasingly setting the pace. This enormous drain on studio resources has largely crowded out the kind of mid-budget movies—comedies, dramas, romances, cerebral genre stories that aren’t based on comic books—that Hollywood only seems to remember when awards season rolls around.

Along with a smattering of boutique film outlets like A24 and the recently imperiled Annapurna Pictures, it’s television that has stepped in to fill this void in American entertainment. The medium’s typically lower episodic budgets and longer arcs lend themselves to realistic human stories: sprawling ensemble dramas, slow-burning romances, coming-of-age tales that actually give young characters time to grow and change. It’s not that these shows are always better or even smarter than blockbuster movies; I’ll always pick Black Panther over This Is Us. But if art is supposed to mirror life, they do represent a large swath of experience that mainstream cinema barely touches. And the relative creative freedom offered by cable and streaming services has drawn quite a few of our greatest filmmakers, from David Lynch and Spike Lee to Cary Joji Fukunaga and Jane Campion. Other brilliant directors (Alfonso Cuarón, Dee Rees, Tamara Jenkins, Noah Baumbach) have increasingly turned to Netflix to make the kind of intimate yet artistically ambitious movies Hollywood has all but stopped funding.

Yet if streaming has become a refuge for an endangered breed of visual storytelling, that business is also very much in flux. Netflix will spend an estimated $15 billion this year on original programming, in hopes of holding subscribers’ attention with a constant barrage of new TV seasons and movies. It’s a risky but perhaps necessary strategy for the only major player in the streaming game that doesn’t have other revenue streams—like Amazon’s monolithic presence in e-commerce or Apple’s consumer electronics—to prop it up. Meanwhile, powerhouse entertainment and tech companies—not just Disneyand Apple but also WarnerMedia—are on the verge of launching another wave of standalone streaming services. Even as some of these new outlets tout smart, non-franchise series like Apple’s Reese Witherspoon/Jennifer Aniston vehicle The Morning Show, the uncertainty that plagues the streaming business—and TV in general—in 2019 gives Disney+ an opening to transform it into yet another intellectual-property arms race.

You can already see the biggest players in that game—outlets that made their names with so-called prestige TV shows—snapping up big, expensive fantasy stories with franchise potential. On the heels of Game of Thrones, HBO (a Warner company) isn’t just developing a spinoff of its biggest hit; it’s preparing to unveil adaptations of the DC Comics cult hit Watchmen and Philip Pullman’s beloved book series His Dark Materials. Netflix is about to drop its Jim Henson Company collaboration The Dark Crystal: Age of Resistance. Amazon has gone all-in on fantasy, debuting meta-superhero drama The Boys, Neil Gaiman/Terry Pratchett adaptation Good Omens and dark Victorian fairy tale Carnival Row, all within the past three months. The Hollywood Reporter estimates the company could spend more than $1 billion on its upcoming Lord of the Rings series. Add Marvel and Star Wars to the monoculture-courting mix, and Peak TV’s glorious proliferation of specific, niche, human stories—ones that cater to diverse, fragmented, often exclusively grown-up audiences—can start to look pretty vulnerable.

I don’t want to get too alarmist. I’m actually looking forward to spending more time with Jeff Goldblum and Miss Marvel in the near future. And TV in 2019 is a vast universe, with far more room for variety than the release schedules of major Hollywood movie studios. That won’t change overnight. Still, now that the small screen has become a refuge for audiences who’ve become increasingly alienated from the superhero-dominated multiplex, there’s something distinctly foreboding about the countdown to Disney+. 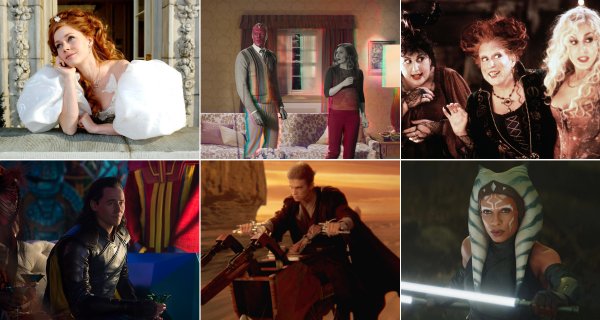