Actor Felicity Huffman was sentenced to 14 days in jail on Friday for her role in the college admissions scandal, after federal prosecutors argued that some period of incarceration was necessary to send a message that privileged parents would be “equally subject to the law regardless of wealth or position.”

Huffman, 56, pleaded guilty in May to conspiracy to commit mail fraud and honest services mail fraud for paying $15,000 to have a proctor correct her eldest daughter’s SAT answers in 2017. In federal court in Boston on Friday, Huffman cried as she apologized to her daughter, who she says was not aware of the cheating scheme.

“I was frightened. I was stupid, and I was so wrong. I am deeply ashamed of what I have done,” Huffman said, according to the Associated Press. “I have inflicted more damage than I could ever imagine. I now see all the things that led me down this road, but ultimately none of the reasons matter because at the end of the day I had a choice. I could have said no.”

Huffman had considered pursuing the same scheme for her younger daughter, but ultimately decided against it.

Federal prosecutors argued that incarceration was “the only meaningful sanction for these crimes,” and had asked that Huffman receive a one-month prison sentence and $20,000 fine. Instead, U.S. District Judge Indira Talwani sentenced her to 14 days in jail, 250 hours of community service, a year of supervised release and a fine of $30,000.

Huffman is the first of more than 30 parents to be sentenced for their role in facilitating cheating and bribing athletic coaches to get their children into elite schools. In the months since prosecutors announced criminal charges against 51 people, observers had questioned whether any of the defendants would serve time in prison. In June, former Stanford sailing coach John Vandemoer, the first person involved in the scandal to be sentenced, received no prison time.

One complicating factor has been a legal debate over whether any victim suffered a financial loss as a result of the bribery scheme—which could affect how lenient the sentences are. Federal probation officers, in conflict with prosecutors, concluded in a report this week that there was no victim of Huffman’s crime.

In a letter to Talwani last week, Huffman said there was “no justification for what I have done,” but explained that her “desperation to be a good mother” drove her to meddle with her daughter’s test score.

“I talked myself into believing that all I was doing was giving my daughter a fair shot. I see the irony in that statement now because what I have done is the opposite of fair,” she wrote. “I have broken the law, deceived the educational community, betrayed my daughter, and failed my family.”

The charges against Huffman and other parents—amid anticipation that they might receive lenient sentences—have fueled conversations about racial and socioeconomic inequality in the criminal justice system and fairness in higher education, as those accused of bribing their way into elite schools also had access to legal advantages, including private tutors, expensive college counselors and powerful connections.

During the sentencing hearing, Talwani reprimanded Huffman for trying to “get one more advantage” in the college admissions process, a system “already so distorted by money and privilege.”

Prosecutors referenced the case of Kelley Williams-Bolar, a mother in Akron, Ohio who was convicted in 2011 on felony charges related to registering her daughters for public school under their grandfather’s address in a better district. She was sentenced to 10 days in jail, three years of probation, and fined $70,000. Her conviction was later reduced to a misdemeanor by then-Gov. John Kasich.

“I was a divorced mom, a black mom, living in an inner-city, just trying to make my way, trying to go to college, trying to start over again, and the justice system didn’t have any mercy on that at all,” Williams-Bolar told TIME this week. “The justice system is not just for everyone.”

Huffman’s sentence provides some insight into what other defendants in the admissions scandal can expect as their cases proceed. Talwani noted that Huffman did not involve her child in the scam and paid a smaller bribe than many other parents, but she agreed “there should be some incarceration imposed.”

“The fact that the judge decided to send one of, arguably, the least culpable defendants to some jail time will let [other defendants] know that probation may not be in the cards,” says Doug Berman, a Moritz College of Law professor who studies criminal sentencing.

Several defendants—including Full House actor Lori Loughlin and her husband Mossimo Giannulli, accused of paying $500,000 to have their daughters designated as crew team recruits at the University of Southern California—have pleaded not guilty and are planning to proceed to trial.

They could face up to 40 years in prison if convicted.

“One always faces a longer prison term if convicted after a trial, maintaining their resistance and showing no remorse,” Berman says. “I’m sure there are defense attorneys advising clients who have not yet pled guilty that it’s not too late.” 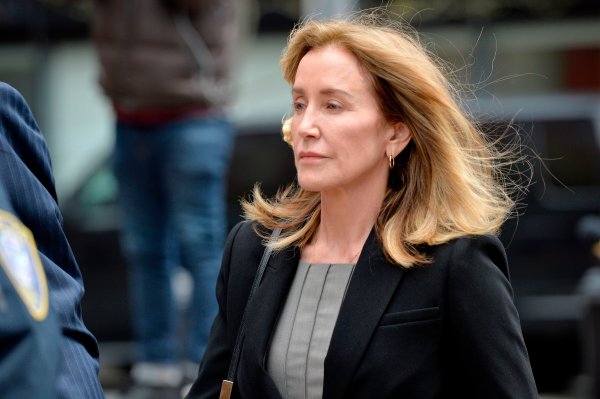 Why Felicity Huffman Probably Won't Get Prison Time
Next Up: Editor's Pick