This Is Billy Porter's Grandest Entrance Yet

Billy Porter, Pose star and the noted server of looks (or should we say lewks), is no stranger to a grand entrance — just look back at his appearances at this year’s Met Gala, every awards season and fashion week.

However, Porter really upped the ante with his latest entrance at The Late Late Show With James Corden, where his magnificent entrance included a costume change, a musical number, and some mingling with the studio audience.

In a clip from the show’s opening moments, Porter is preceded by actress Kirsten Dunst, who enters in the usual conventional manner of Corden’s guests.

Following Dunst sitting down, Porter makes his grand entrance by walking and wearing a sequined dress, glittery platform boots and a glorious golden cape, sashaying up to the stage before pivoting and returning to the entryway, where he donned a new coat and carried out a bouquet of roses, which he liberally distributed throughout the crowd.

As if that wasn’t enough to make a statement, he then joined Corden’s band’s performance by playing the tambourine before being carried in on a litter, in a seeming nod to his entrance at the Met Gala, to the stage, where he finally took his place next to Dunst, who fittingly told him: “It’s your show now.”

All future hosts should be aware, nobody does late night realness like Billy Porter.

Watch his full entrance below. 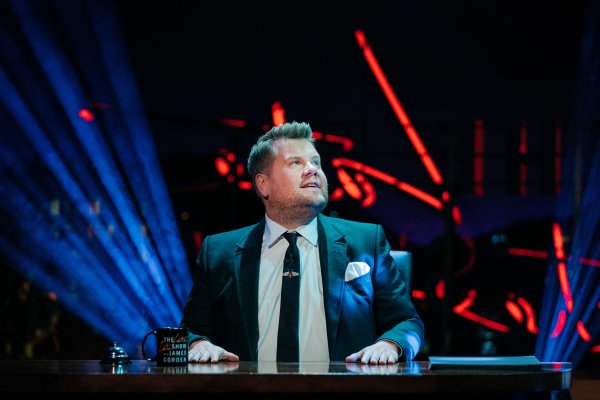 James Corden Claps Back At Bill Maher’s 'Fat-Shaming' Comments
Next Up: Editor's Pick