Here's Who Will Win—And Who Should—at the 2019 Emmys

The 71st Primetime Emmy Awards are upon us, and with them the time-honored tradition of guessing what the Television Academy will deem the past year’s greatest contributions to the medium of television. If you’re placing bets, I urge you to consult an oddsmaker—or at least an awards blogger—rather than a critic; we are notoriously bad at this stuff. But we do have fun gaming it all out. So, with the 2019 ceremony less than a week away, here are my predictions (and preferences) for the night’s biggest categories.

The wedding of Shiv and Tom in the season 1 finale of 'Succession.'
Colin Hutton/HBO

This category should’ve been Game of Thrones‘ to lose, but I’m betting that the public backlash to its astoundingly weak final season was intense enough to kill the Academy’s temptation to reward the show on the basis of its popularity. Maybe that’s naive. Yet a very different HBO series, Succession, which is currently airing its second season but was nominated for its first, is the buzziest and best newcomer of the bunch—a true heir to such pre-Thrones winners as Mad Men and Breaking Bad, set in a world that should be familiar to much of the Emmys’ voting body. That said, the unexceptional but crowd-pleasing British political thriller Bodyguard could conceivably be a spoiler.

Will Win: The Marvelous Mrs. Maisel
Should Win: Fleabag

This is easily the hardest category to predict—not just because Maisel broke Veep‘s three-time winning streak in 2018, but also because, for once, the nominees actually include many of the year’s best comedies. It’s a relief to see Canadian treasure Schitt’s Creek finally get the recognition it deserves, after four seasons of snubs. And in my estimation, the transcendent second season of Phoebe Waller-Bridge’s Fleabag only narrowly edges out the debut run for mind-bending Natasha Lyonne vehicle Russian Doll. But if the Academy honored either show, it would be the weirdest winner in the history of the Emmys. (Only Arrested Development comes close.) Besides, despite a fun but uneven second season and the possibility that Veep might win back the crown for its final season, Maisel is catnip for the showbiz set.

Will Win: When They See Us
Should Win: Sharp Objects

Another category where even the weakest nominee—Escape at Dannemora—has much to recommend it. Though surprise hit and certified Important Drama Chernobyl could also pull out a win, Ava DuVernay’s Central Park Five miniseries When They See Us combines righteous and relevant subject matter, thoughtful storytelling, fully realized characters and stellar performances by a young cast. It may be the all-around best work yet by one of the most beloved figures in Hollywood. And it’s simply the kind of the show that wins awards. For me, it’s a close second to the polarizing Sharp Objects, a poetic meditation on family, history, trauma and the female-victim archetype from creator Marti Noxon, author Gillian Flynn, director Jean-Marc Vallée and stars Amy Adams, Patricia Clarkson and Eliza Scanlen. Bleak though it undoubtedly was, the miniseries was most remarkable for its intricacy—the way every closeup, cut and song on the soundtrack underscored its disturbing themes without overstating them.

Lead Actress in a Drama Series

Lots of head-scratchers in this list of nominees, from consistently strong performers on past-their-prime shows (Davis, Wright) to actors who, to my mind, are coasting a bit on the visibility of their shows (Clarke, Moore). But even as Killing Eve went off the rails as its second season progressed, Oh and Comer kept me riveted. And I certainly won’t be disappointed in the extremely likely event that the former—a long-undervalued TV vet who’s finally getting the accolades she deserves—takes the Emmy. The thing is, Season 2 really belonged to Comer. A young British actor with a big future of ahead of her, she nailed the delicate task of inhabiting a character who’s always playing a role while rendering that woman’s true self visible to the viewer.

Lead Actor in a Drama Series

Ballroom elder Pray Tell, the soul to Blanca’s (Mj Rodriguez) heart on groundbreaking drama Pose, is the role Billy Porter was born to play. This season, the show’s creators rewarded him with impassioned monologues, gorgeous song-and-dance sequences, a May-December (or at least May-October) romance, a valiant struggle with HIV, loads of productive self-doubt—and Porter made a meal out of each and every scene. Much as I can imagine the Emmys going for a safer, more mainstream pick, I’m going to err towards optimism and wager that his heroic, big-hearted performance will put him over the top.

Lead Actor in a Comedy Series

Michael Douglas isn’t even turning in TV’s best performance as a washed-up acting teacher (see: Henry Winkler in Barry), so as long as he doesn’t take the prize based on star power alone, I won’t complain. And there’s no denying that last year’s winner Bill Hader deserves his frontrunner status, for continuing to complicate the character of a repentant hitman who channels his guilt and regret onstage. But it’s been a while since the Academy honored a straight-up comedic performance in this category—and Levy brings both an improviser’s chops and his signature sweetness to Schitt’s Creek‘s financially ruined yet emotionally fulfilled patriarch.

Lead Actress in a Comedy Series

Brosnahan may have slipped in last September, thanks to good timing, but Louis-Dreyfus has won this category every year Veep has been eligible. Her victory for the show’s final season is the safest bet of the night. Listen: Selina Meyer is among the greatest characters in TV history, and Louis-Dreyfus is a living legend. She isn’t the only woman doing great work in comedy, though. Her peer Catherine O’Hara, for instance, has spent five seasons playing the self-styled diva Moira Rose. Down to the perfectly pretentious accent she invented for Moira, O’Hara disappears into the physically demanding role in each episode. But honestly, I can’t decide between Canada’s most charming export and Natasha Lyonne, a creator-star who has finally parlayed her gruff, street-smart persona into the lead role she so richly deserves. (Waller-Bridge, meanwhile, should get her trophy in the writing category.)

Lead Actress in a Limited Series or Movie

Will Win: Michelle Williams, who sang, danced and personified the best and worst of female ambition, in what was admittedly an outstanding performance.
Should Win: Amy Adams, the rare actor who can do dark and depressive just as convincingly as she does sweet and bubbly, in the rawest role of her career.

Lead Actor in a Limited Series

Will Win: Mahershala Ali, who more or less clinched the award the moment he accepted the role.
Should Win: Jharrel Jerome, on the strength of his heartbreaking performance in the miniseries’ harrowing final episode.

Supporting Actress in a Comedy Series

Will Win: Olivia Colman. It’s just her year.
Should Win: Betty Gilpin, a very smart actor who’s helped shape her character Debbie Eagan into the real hero and most dynamic figure on GLOW.

Supporting Actor in a Comedy Series

Will Win: Tony Shalhoub. Season 2 was a big one for Pa Maisel, from wooing back his runaway wife to prancing around the Catskills like he owned the place.
Should Win: Anthony Carrigan, for making a believable—and weirdly moving—character out of Chechnya’s most sensitive mobster.

Supporting Actor in a Drama Series

Will Win: Peter Dinklage, still the best thing about Game of Thrones after all these years.
Should Win: Dinklage

Supporting Actress in a Drama Series

Will Win: Gwendoline Christie. A breakout performance from an actor who beautifully balances vulnerability and strength.
Should Win: Christie or Sophie Turner, who has consistently located the agency in a character originally written as silly and passive—while growing up on TV’s biggest show. 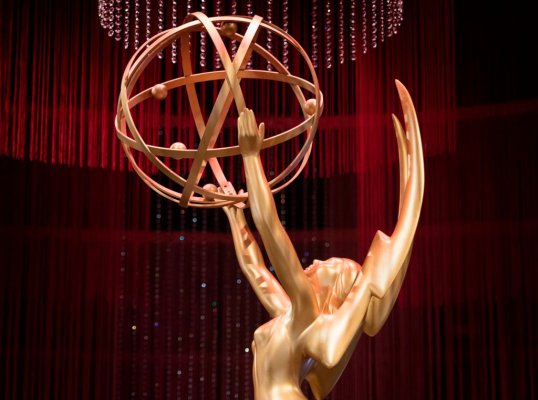 Everything to Know About the 2019 Emmys
Next Up: Editor's Pick