'You Will Not Silence Us': Megan Rapinoe Talks Equal Pay, World Cup Celebrations and Presidential Tweets

Megan Rapinoe won both the Golden Ball award as the World Cup’s best player and the Golden Boot as its leading scorer. During her whirlwind tour of media appearances and a parade in New York City following the U.S. women’s soccer team’s victory in France, the soccer star and lighting rod chatted with TIME about patriotism, staring down pressure, and coping with Presidential criticism.

Since the U.S. beat the Netherlands 2-0 in the World Cup final on July 7, you and your teammates have partied pretty hard. How tired are you? I’m equally exhausted and totally exhilarated all at once. I guess it’s adrenaline, if we’re talking science. There’s nothing like this feeling, there’s nothing like the opportunities we have right now, and the excitement around it.

You scored three of your five goals in the knockout stage on tension-filled penalty kicks. What kind of advice can you share with the rest of us for dealing with high-pressure situations? Thank God our coaches had us start practicing them before we got to the tournament. Very heads-up move by them. Calm yourself, believe in yourself, stick to your routine and smash it home.

There’s been a lot of talk about other countries around the world closing the talent gap with the U.S., which has now won four of the eight women’s World Cups that have been contested. But your team outscored your opponents 26-3 during the tournament. Is the gap really closing?

Absolutely. Teams like Spain and Italy, going into the knockout rounds, had good performances. The Netherlands, who weren’t even in the last World Cup, and historically have not even put a lot into the women’s programs, the last four years they’re European champions and in the final of the World Cup. England is so good, Japan — every single team I feel like is getting better and better, and it’s a true sign that all these federations are putting more money into their programs and allowing these women to really maximize their potential and train the way they should to get the most out of themselves. For sure every team is getting better, us included. The gap is definitely getting tighter. The margin for improvement at the very top is smaller compared to some of the other teams. But we’re still holding our own.

Is there anything you wish you did on your journey — or wish you hadn’t done — that might be useful for someone coming up in your shoes, soccer player or otherwise, to learn from?

Certain things as a younger player, in terms of being professional, taking care of your body, being at the top of your game — I wish I was doing all the things I’m doing now before I turned 30. I started doing them when I was 30. I was like, Oh, wow, this makes a difference. Eating right, being super intentional about training, recovery, things like weightlifting, all the little things you don’t think you need when you’re 22 or 23. You think you’re going to be invincible forever, and it turns out you’re not. In terms of off-the-field stuff, I really don’t have any regrets. I think that I’ve learned and grown throughout my career. As a younger player, you’re kind of wide-eyed and trying to soak everything up. But I feel like myself and really the whole team has taken advantage of the platform that we have and tried to use it in the best way we can to effect the most change.

Why do you stand stoically during the national anthem, declining to sing or put your hand over your heart? I am in solidarity with Colin Kaepernick in trying to continue a conversation. It’s no secret that we still have very tense race relations in this country. I don’t think everybody is as free as everybody else. Until people with the most privilege — and I would consider myself in that group — put our own skin in the game, then things aren’t really going to change. And if you aren’t putting your own skin in the game, then I think you need to have a look in the mirror and say, “What are you doing? How are you using whatever platform you have, whatever time you have, to help change that?” Because I really believe that everybody has a responsibility to make the world around them a better place.

Despite your anthem stance, why do you consider yourself, as you’ve said, “very deeply American”? I looked out my hotel window in New York City as soon as I got here and saw the Statue of Liberty. The land of opportunity. But it has to be for everyone. A lot of people have been cut out of that dream. It’s one thing to be the biggest and baddest and best country. But if you’re not sticking up for someone else who maybe isn’t in that position, then you’re kind of just a bully.

Your goal celebration, a pose with outstretched arms, is now iconic. What message were you sending? That was me representing everyone fighting for the same things as I am — equal pay, more attention to race relations, migrants at the border — saying, you will not silence us, you will not take the smile off our face, you will not take anything from us. We’re coming. We’re here. We’re not leaving.

What was your reaction to President Trump tweeting, during the tournament, that you disrespected the country? One of our press officers alerted me to it. Look, I don’t follow the president on Twitter so I had to search to find it. I know it’s serious, I know it’s a big deal. But it seemed insane to me that this was happening. You skipped over 4,000 things on your to-do list to do this instead. Whatever. We have games to play.

But the next game, against France in the quarterfinals, you scored both goals in a 2-1 win over the host country. Did his tweets motivate you? Maybe a little bit. There was so much motivation prior to that for so many different reasons. And I guess maybe that just added to all the reasons to have motivation. If at this point I need a presidential tweet to get me motivated, we have a bigger problem. But it certainly didn’t unmotivate me, that’s for sure.

You’ve been an outspoken advocate for equal pay in soccer. FIFA has pledged to increase the World Cup prize money available to women’s players from $30 million this year to $60 million in 2023. But you’ve said that doesn’t go far enough. Why? Thirty to 60 is completely arbitrary. I don’t know where the 30 came from, where the 60 came from. I think they thought, “We’ll double it and they’ll be really happy with that.” But doubling zero still equals zero. I would like to get into how we can over-invest in the women’s game to get those numbers much closer to where the men are. [The men will receive $440 million in prize money for the 2022 World Cup.]

The U.S. team has come to embody women’s empowerment, on and off the field. What, in your mind, does this World Cup win ultimately represent? Certainly much more than the World Cup. Much more than sport. This has to be the turning point. The conversation is no longer about should we have equal pay, or should we be supporting women. It’s how do we support not only athletes but women in general. And really invest in that and have a conversation and move forward from where it’s been for a long time. So I think it’s a monumental win in so many ways. The effects are going to be felt for years to come. 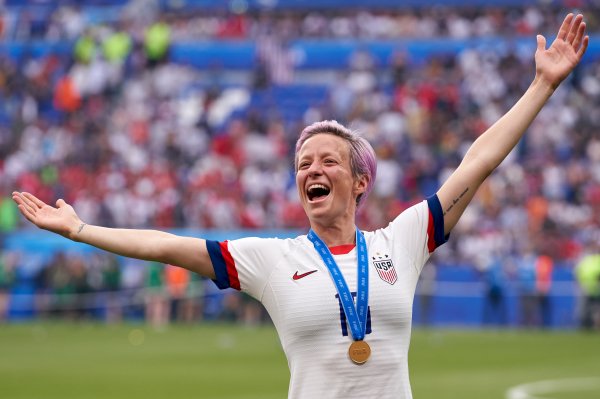 'You Need to Do Better for Everyone,' Rapinoe Tells Trump
Next Up: Editor's Pick