Each episode of Tales of the City closes on a shot of the rainbow flag, which almost feels a little on the nose–until it doesn’t. The Netflix miniseries is a sequel to the earlier television adaptations of Armistead Maupin’s novels about the intersecting lives of the largely queer residents of 28 Barbary Lane. But it’s also an update, and so is the flag. Instead of the traditional six-color variation, it’s the newer version unveiled in 2017, incorporating black and brown to reflect the black and brown members of the queer community.

This updated flag represents the newer San Francisco this Tales of the City depicts, one that’s more queer, more inclusive and less white. It’s a dramatically different city than the one Maupin documented when he began writing the Tales books in 1974, one that’s been shaped by the gay-rights movement, the AIDS crisis and the tech boom–sweeping changes that were depicted in the nine books, which inspired three TV miniseries adaptations.

Netflix’s Tales of the City jumps ahead a couple decades from where the last of those miniseries, Further Tales of the City, left off, with several actors reprising their roles. Mary Ann (Laura Linney) returns to 28 Barbary Lane–the “chosen family” apartment complex where she once resided–to celebrate the 90th birthday of wise landlady Anna Madrigal (Olympia Dukakis). Mary Ann also needs to reconnect with the people she left behind: her best friend Michael (Murray Bartlett, a recast from the original), her ex-husband Brian (Paul Gross), her socialite pal DeDe (Barbara Garrick) and her estranged daughter Shawna (Ellen Page). There are new additions too–Michael’s boyfriend Ben (Charlie Barnett); Margot (May Hong), a lesbian artist; and Jake (Garcia), a trans man discovering his sexual identity.

You’d be forgiven for feeling overwhelmed: this is a lot of ground to cover. And while fans of the original will likely dive into this new series with warm nostalgia, newcomers may have a harder time parsing the specifics of these impressively convoluted backstories and relationships.

Yet that may not be so important. This Tales of the City is more concerned with the thematic story it’s telling–how to reconcile the gay-rights movement and feminism of the ’70s with a more progressive 2019 understanding of those ideals. When Ben calls out Michael’s older, white gay male friends for their casual use of anti-trans slurs, one of the men angrily counters that Ben has no context for the struggles of his gay elders, particularly the sheer loss of life they endured at the height of the AIDS epidemic.

But the series is also eager–like Anna herself–to right past wrongs. When the first adaptation was released, a cis woman was cast in the role of Anna, a trans woman. Here, we get a flashback to a younger Anna, played by trans woman Jen Richards, in an episode featuring a diverse cast of trans actors. The show as a whole reflects a more contemporary understanding of what inclusion should look like: actors of color, trans and gender-nonconforming actors, and actors with disabilities. Even as shows like HBO’s Looking and films such as Love, Simon have marked steps forward when it comes to queer representation, Tales of the City remains uniquely committed to showcasing a fuller spectrum of the LGBTQ experience. These stories of queer lives, told with frankness and honesty, feel distinctly of this moment. 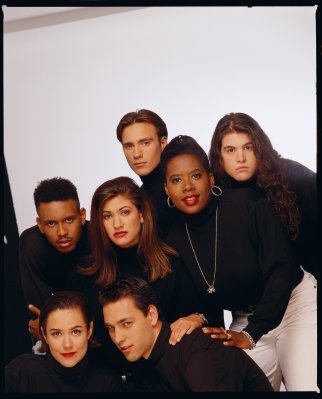 <em>The Real World Homecoming: New York</em> Is a Bittersweet Glimpse at Everything Reality TV Could've Been
Next Up: Editor's Pick