Breaking Down the Spider-Man: Far From Home Post-Credits Scenes

Warning: This post contains spoilers for Spider-Man: Far From Home.

Spider-Man: Far From Home seems to end happily for Peter Parker (Tom Holland), despite its weighty themes of mourning and legacy. Peter has been back in school for a year since the events of Avengers: Endgame. In that movie, Tony Stark (a.k.a. Iron Man) used the powers of the Infinity Stones to bring back the half of the earth’s population that disappeared after bad guy Thanos’ snap in Avengers: Infinity War. Now, Iron Man and Black Widow are dead, Captain America has traveled back in time to grow old and Thor has retired to space. The Avengers are no more.

Throughout the movie, Peter struggles with the weighty expectations laid upon him following the dissolution of the Avengers. Reporters ask him whether he will be the next Iron Man, and Tony leaves him with a powerful, weaponized computer program (EDITH) hidden in Tony’s signature sunglasses. But Peter just wants to enjoy his Eurotrip with his friends and reach the top of the Eiffel Tower so he can tell his crush MJ (Zendaya) how he feels.

As soon as Peter sees Mysterio (Jake Gyllenhaal), a hero who could possibly take Tony’s place instead, he hands over the valuable EDITH technology. Unfortunately for Peter, Mysterio is actually a former Stark lackey who’s bitter that Tony dismissed his BARF technology, which could create advanced, realistic holograms. (We got a glimpse of Tony using this tech to talk to his parents in a demonstration at MIT during Captain America: Civil War.) Mysterio uses that very BARF tech to create fake villains called the Elementals which he can defeat, thereby tricking the world into thinking he’s a hero.

Peter and MJ eventually discover Mysterio’s plot, and Peter defeats the villain before sharing his first kiss with MJ. But in two post-credits scenes, we find out that things are not as they appear. Mysterio may be dead, but he makes sure to frame Peter for the destruction of London before he is defeated. And while Nick Fury (Samuel L. Jackson_ seemed to be helping and guiding Spider-Man on his European vacation, it turns out that someone has been impersonating the SHIELD agent throughout the movie.

Here’s a breakdown of both Spider-Man: Far From Home post-credits scenes.

By the end of the movie, Peter and MJ are officially an item. And for their first date, Peter decides to take MJ swinging through New York. In the first post-credits scene, they land in the middle of Times Square and are about to leave when a breaking news alert plays on a massive screen. A news anchor announces that an anonymous source has leaked a video showing Mysterio’s final moments.

The video plays, and we see Mysterio speaking into a camera. He says that he is being attacked by Spider-Man for some reason. Mysterio then says that Spider-Man plans to kill anyone who tries to take Iron Man’s place — that Spider-Man believes he is the only rightful heir to Tony Stark. The image cuts out, and we see Spider-Man’s feet behind Mysterio. In reality, the computer program stored inside Tony’s glasses, EDITH, had asked Spider-Man if he would like to “execute” the orders to cancel all the drones. But the video has been edited to make it sound like Spider-Man says just, “execute them all.” Fake gunfire plays, and it is implied that Spider-Man has killed innocent people.

Keen-eyed viewers may already have realized that this was Mysterio’s plan all along. When it becomes clear that Spider-Man is going to reveal Mysterio’s trick, Mysterio tells his henchmen he has a contingency plan. EDITH’s “execute” orders phrasing seems strange at the time and, upon a second watch, is clearly a set-up by Mysterio. After Mysterio dies, we see one of his henchmen pulling a USB out of a computer and leaving. This is likely the man who sent the video to the Bugle.

Why would Mysterio reveal Peter’s identity? In the most immediate sense, this means that potential super-villains can target Peter and the people he loves, namely MJ and Aunt May, thus punishing Peter for defeating Mysterio.

But Mysterio, who resented Tony Stark’s power, is also trying to gain Tony-like control here. Tony built EDITH, which stands for “Even Dead I’m The Hero,” for Peter. When Peter first receives EDITH, this name is played as a joke about Tony’s ego. But now Mysterio has used EDITH to similar effect, portraying himself as the hero even after he’s been killed.

It’s a fitting ending for a movie that centers on Peter Parker taking up the mantle from Tony Stark: The first Iron Man movie ends with Tony declaring, “I am Iron Man” and essentially challenging any baddies to try and fight him. Peter Parker would never be that egotistical or dumb, but he now finds himself in the same position nonetheless.

The revelation of Peter’s identity to the entire world has some precedent in the comic books. During the Civil War run published in 2006, Spider-Man aligns himself with Iron Man in favor of the Superhuman Registration Act, which would require all superheroes to register their identities with the government. At a press conference, he takes off his mask and reveals his identity to the world. This bold move is retconned in a later comic book that involves Peter and MJ striking a deal with Mephisto, the Lord of Hell, to undo a number of past events, including restoring Peter’s secret identity. It’s unlikely that Mephisto will show up in the MCU films, so Peter’s public identity is probably permanent.

In the second post-credits scene, we see what look to be SHIELD Agents Nick Fury and Maria Hill. But the two characters transform from themselves into Skrulls, the shape-shifting alien species from Captain Marvel. It turns out that Nick Fury has enlisted Talos, the ostensible villain but actual good guy from Captain Marvel, to impersonate him on earth.

Talos calls Nick Fury to let him know that things went a bit awry after he gave Peter Parker EDITH as Fury had ordered. Talos urges Nick Fury to come back to SHIELD headquarters. “People keep asking me where the Avengers are, and I don’t know what to say to that,” he says.

We then see Nick Fury taking the call on what looks to be a beach. But Fury is not on a well-deserved vacation — he’s just relaxing in a simulator on a massive space station. Other Skrulls are working on the ship. Whatever Fury is planning for the next phase of the Avengers, it will take place in space.

Last we saw Talos and the Skrulls, Captain Marvel was headed into space to find them a new home away from persecution in the 1990s. It seems that since then Fury has aligned with the Skrulls for some greater purpose, perhaps in response to Thanos’ intergalactic attack. Presumably Talos has been impersonating Nick Fury just during the events of this film and not before — though we can’t be certain.

But the reveal does explain why Nick would fall hook, line and sinker for Mysterio’s multiverse explanation for how he arrived on “our Earth,” which Mysterio himself admits makes no sense “but is the kind of thing people want to hear now.” Nick Fury has always been rather skeptical of would-be heroes — remember, he initially refused to let Iron Man be a part of the Avengers initiative because of his ego — and he probably would have sussed out Mysterio as a fake.

Nick Fury’s plans for space are unknown, but Kevin Fiege, head of Marvel Studios, has long said that the next phase of the Marvel Cinematic Universe following the events of Avengers: Endgame will become grander in scale and look toward the larger universe. If Spider-Man takes up Iron Man’s mantle as the guardian of earth, then future movies will likely focus more on the heroes of space. Captain Marvel 2 is likely in the works, as is a third Guardians of the Galaxy movie. Both of those films will likely take place outside of Earth. Marvel Studios has also announced an Eternals movie about a group of celestial beings who, again, operate in space. 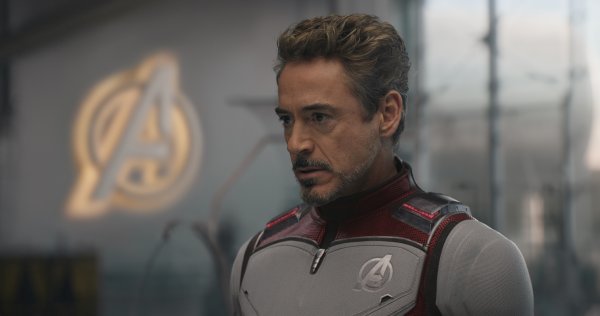 Here's What Happens in the Extra Scenes From the Avengers: Endgame Re-Release
Next Up: Editor's Pick