Spider-Man: Far from Home Is a Delightful Teen Movie—The Superhero Stuff, Not So Much

Somewhere along the path in the creation of the all-superhero-movies, all-the-time universe in which we increasingly live, someone decided that big CGI battles were what viewers really wanted from these pictures. Marvel fans continually claim, believably so, that the characters are what they love most about the Marvel Cinematic Universe. But time and again, over and over, those characters are swept aside in favor of muddled, mind-numbing sequences where a giant something-or-other stomps through a city or town. The superheroes are flitting around, sure, doing their best to stem the damage; obviously, they need a chance to flex their superpowers. But in these moments, the focus is never really on them. And if these characters are appealing largely for the way they meld superhuman capabilities with garden-variety human frailty, these excruciatingly dumb battle scenes—which seem to become more generic-looking with each new film—defeat the purpose. If you’re going to a movie to see Spider-Man, why wouldn’t you want more Spider-Man, instead of just more elaborate and increasingly routine CGI?

My one big wish for the 85 percent delightful Spider-Man: Far from Home would be more Peter Parker/Spider-Man (as played by Tom Holland, genial but never cloying) and much more of his sidekicks, particularly his defiantly elusive crush MJ (played by the captivating Zendaya). What I could do with less of? A huge chunk of the movie’s last third, which depicts in annoying detail the invasion of a bunch of whats-its, served up with an accompaniment of virtual-reality flimflam, all of it the work of a group of masterminds who used to work for I-can’t-tell-you-whom.

But until all that nonsense gets rolling, Spider-Man: Far from Home is breezy and enjoyable, focusing on all that’s most appealing about Peter Parker and his web-slinging alter ego Spider-Man: Chiefly, the fact that he’s not yet out of his teens but has been vested with superpowers that he can’t fully control. The symbolism is obvious. But the feelings of being a teenager out of step with your own body are universal enough to transcend any term-paper allegory. Maybe that’s why people who don’t much care for superheroes in general often harbor affection for Spider-Man, and for Peter Parker, a kid who welcomes the status that being an Avenger grants him but who still has trouble getting a date. Peter’s guardian, Aunt May—played, in flash-of-genius casting, by Marisa Tomei—refers to his intuition about bad guys’ hovering nearby as his “Peter tingle.” It’s so embarrassing, we cringe for him. But even he knows it’s the thing that sets the men apart from the boys.

The regular old teenage stuff in Spider-Man: Far from Home is great. Peter’s chief aim, at the movie’s start, is to get past the events shown in Avengers: Endgame (Far from Home treats most of that movie’s self-seriousness as a frothy joke) and head off on a school trip to Europe. There, he hopes to win over the classmate he’s long had a crush on, Zendaya’s leggy and brainy MJ. Peter’s closest friend, Ned (the marvelous Jacob Batalon), doesn’t like this idea: He harbors the fantasy that he and Peter are going to be “American bachelors in Europe.” But on the flight over, he falls for sweet A-student Betty (Angourie Rice)—it turns out he’s really just a 19th-century gentleman in a teenage nerd’s body. Ideally, that should leave Peter free to court MJ, though that’s not how it shakes out.

And sure enough, on the tour’s first stop—Venice, an ancient city of incomparable beauty—an angry monster appears, his battering limbs, his unstoppable torso, his roaring head all made of dirty canal water. Peter doesn’t have all the correct Spider-Man accouterments with him and fails at vanquishing the creature. Another superhero, Mysterio, a.k.a. Quentin Beck (Jake Gyllenhaal), steps in and brings the beast to heel. Nick Fury (Samuel L. Jackson), who happens to have set up shop in some nearby deserted palazzo, tries to recruit Peter into fighting future creatures—apparently, a bunch more are coming. Peter resists. He just wants to be a normal kid, on holiday. Beck sympathizes with him and offers lots of older-bro advice.

From Venice, the school group—which, incidentally, has the kind of multiracial makeup you’d see in an average New York City classroom—treks to Prague, where the two teacher-chaperones (Martin Starr and J.B. Smoove, both absurdly wonderful) surprise the kids with tickets to a four-hour opera. Meanwhile, Peter is distracted not only by monsters—which means he has to keep dashing off to do Spider-Man things—but also by lingering grief over the loss of his friend and mentor, Tony Stark. It doesn’t help that a hotshot kid from his school, Brad (Remy Hii), keeps trying to move in on MJ.

The whole teenage soap opera is so pleasurable, and the performers so much fun to watch, that it’s a drag when Spider-Man: Far from Home has to get down to the business of being a regular old superhero movie. The overbearing climax grinds on seemingly forever. But it’s not quite enough to blot out the memory of what Peter and his friends are like when they’re just allowed to be kids. In one of the picture’s final moments, back in New York City, Peter finally gets to take MJ on a date. As Spider-Man, he scoops her up and they swing through the city, a mixed-up wonderland of traffic signals, construction scaffolding and lit-up signs. The night is young, and so are they. They’re making their own song for swinging lovers.

The original version of this story misstated the name of Jake Gyllenhaal’s character. It is Mysterio, not Mysterioso. 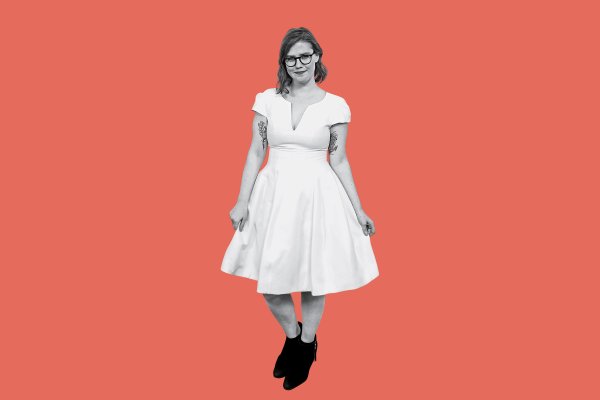