Stephen Colbert has some great advice for us all: “Find somebody who looks at you the way that Jake Gyllenhaal looks at Tom Holland.”

During his sit-down chat on the The Late Show with the Spider-Man: Far From Home actor Holland, Colbert shared a photo of the young British actor and his American co-star in the upcoming action movie during their press tour. In the image, Gyllenhaal is focused on Holland with an astute, adoring gaze — much like Holland’s fans must feel towards their superhero.

Holland then shared an anecdote about going to the gym to work out with Gyllenhaal in which both of their competitive tendencies came out to play during a treadmill race. When Holland was struggling through press the next day thanks to the extreme workout, he had to pretend that he was only feeling stiff as a result of doing his own stunts, he told Colbert — because he couldn’t lose face in front of Gyllenhaal, of course.

It’s no secret that the two actors are in something of a bromance: Gyllenhaal has previously called Holland “the nicest guy in the world” and they’ve made their friendship Instagram-official all the way back during Valentine’s Day this winter. To see their chemistry play out onscreen — this time as adversaries, since Gyllenhaal plays the villain Mysterio in the new movie — fans will have to wait until July 5 when the latest Marvel movie gets its big release. 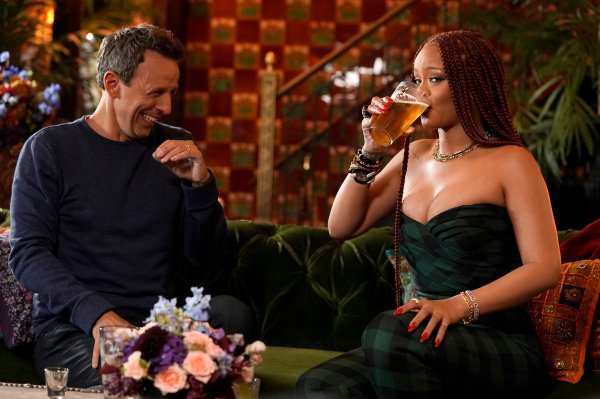