Endgame Changed the Avengers Forever. Here's Who's in the Group Now

But by the end of that movie, Iron Man and Black Widow had died. Captain America traveled back in time to live a peaceful life with Peggy (Hayley Atwell). Hulk looked too injured to seriously fight again. Thor gave up his crown and boarded a ship with the Guardians of the Galaxy. Hawkeye returned to his family and a life of semi-retirement. (Renner will appear in a show on Disney’s forthcoming streaming service Disney+ about Hawkeye passing his title to another hero.)

So who will protect the Earth from now on? Avengers: Endgame hints that a new super-team (who may adopt a new super-name) could take their place. We’re guessing that the Guardians team will remain independent in space, Black Panther (Chadwick Boseman) will continue to rule over Wakanda, Doctor Strange (Benedict Cumberbatch) will deal with magical threats and Ant-Man (Paul Rudd) will continue to pull off small heists. We doubt any of them will become official Avenger. So here’s who will probably inherit the title of Earth’s mightiest heroes.

Captain Marvel (Brie Larson) has already proven herself to be the strongest hero in the Marvel Cinematic Universe. Our guess is the Nick Fury (Samuel L. Jackson) will show up at some point and convince Carol Danvers, a.k.a. Captain Marvel, to stay on Earth and join a new initiative — at least for awhile.

At the end of the movie, Steve Rogers travels back in time to return the Infinity Stones to their former homes. He then decides to remain in the past and live out a peaceful life with Peggy. He eventually returns to the Avengers an old man, and passes on his shield (and the name Captain America) to Sam Wilson (Anthony Mackie), previously known as Falcon. Disney is reportedly making a Falcon and Bucky Barnes series for its streaming service, so it’s unclear how this will affect Sam’s big screen fate.

Much like Steve passes the baton to Sam, Thor bestows the responsibility of ruling the remaining Asgardians on Valkyrie (Tessa Thompson). That likely means that Valkyrie will also be responsible for taking Thor’s place in any sort of super team that develops. It’s unclear whether that means she will get to wield Thor’s hammer someday too.

Spider-Man (Tom Holland) had the chance to become a member of the Avengers back in Spider-Man: Homecoming, but chose to concentrate on school and patrol the streets of Queens instead. Now he’s returning to high school for his next film, Spider-Man: Far From Home, but as he ages he would be a good candidate for official Avengers membership.

Assuming that he can appear both in the streaming service and on the big screen, Bucky (Sebastian Stan) is likely to play some role in the team as well. He still is on a quest to make up for the bad things he did when he was brainwashed by HYDRA and turned into the Winter Soldier.

Scarlet Witch (Elizabeth Olsen) is also reportedly getting her own show on Disney+. That doesn’t preclude her from a role in future Avengers films, but it certainly makes her less likely to show up in the big screen Avengers flicks than, say, Spider-Man.

When asked whether there would soon be an Asian superhero on the Avengers team, President of Marvel Kevin Feige confirmed there would be. That likely means that kung fu master and superhero Shang-Chi, who is reportedly getting his own solo movie at Marvel Studios, will join the Avengers, too.

If Captain Marvel leads the Avengers team, you can be certain that Ms. Marvel will want to tag along. Though Marvel hasn’t confirmed that her movie is in the works yet, we do know they have some plans for the character in the MCU. 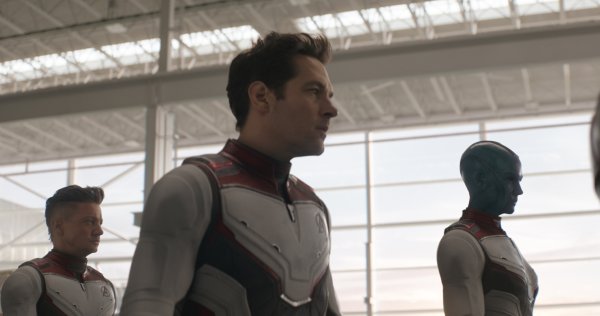 Breaking Down the Complicated Time Travel in Avengers: Endgame
Next Up: Editor's Pick