Prince George, Princess Charlotte and Prince Louis Are Clearly the Most Amusing Spectacle at the Trooping the Colour 2019

The children of the British royal family may have stolen the thunder from their great-grandmother, Queen Elizabeth II, at her own parade.

At the Trooping the Colour 2019 on Saturday, Prince George of Cambridge, Princess Charlotte of Cambridge and Prince Louis of Cambridge were as cute as ever on the Buckingham Palace balcony in London. It was one-year-old Prince Louis’ debut at the event, but considering how enthusiastically he was waving, it seems the Cambridge child is ready for royal duties.

Princess Charlotte, 4, waved to the crowds, while Prince George, 5 — usually the king of being hammy — didn’t necessarily get in on the action.

Their parents, Catherine, the Duchess of Cambridge and William, the Duke of Cambridge laughed as the three kids showed off their royal attitudes.

The annual Trooping the Colour is a birthday parade for the queen. Her 93rd birthday was on April 21, but her “official” birthday falls on the second Saturday of June every year, when the royal family gets together to watch the parade of military flags, or colors, marching, or trooping, throughout London.

This tradition has been around for hundreds of years — so the queen has been lucky enough to have two birthday parties for many years since her coronation in 1953.

Though it wasn’t a party for the kids, the Cambridge kids seem to find all the attention at every opportunity, just like at last year’s event. Prince Louis was under two months old at the time, so he wasn’t able to get in on the fun. But his siblings and cousins certainly held down the fort. Savannah Phillips, the Queen’s great-grandchild and the daughter of Peter and Autumn Phillips, made headlines with her antics at 2018’s Trooping of the Colour.

Savannah Phillips puts her hand over Prince George of Cambridge's mouth as they stand on the balcony of Buckingham Palace during Trooping The Colour 2018 on June 9, 2018 in London, England.
Max Mumby—Indigo/Getty Images

Savannah, who is the eldest grandchild of Mark Phillips and Princess Anne, covered her cousin Prince George’s mouth, because the infamous five-year-old loves causing trouble in the form of cuteness.

In the front row (L-R), children, Princess Charlotte of Cambridge, Savannah Phillips, Prince George of Cambridge and Isla Phillips chat on the balcony of Buckingham Palace as members of the Royal Family gather to watch a fly-past of aircraft by the Royal Air Force, in London on June 9, 2018.
DANIEL LEAL-OLIVAS—AFP/Getty Images

Savannah and her sister Isla Phillips had fun on the balcony during the Royal Air Force’s aerial presentation, along with their cousins Prince George and Princess Charlotte — even though Savannah did have to ‘shush’ her cousin a few times. 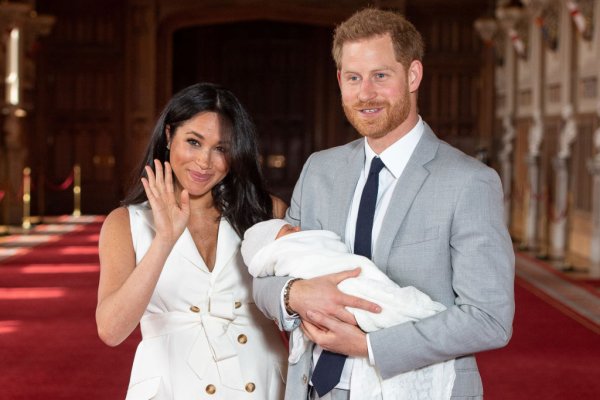 Trump Responds to Meghan Markle Criticism
Next Up: Editor's Pick