At the ripe old age of almost four, Prince George has proved to be one of the most relatable of all young royals. The future king has an expressive face — and an ideal public platform for displaying his deeply-felt emotions. On Saturday, he was front and center during the annual ceremony celebrating his grandmother the Queen’s 91st birthday, called Trooping the Color. Grouped at the balcony of Buckingham Palace with his parents Prince William and the Duchess of Cambridge as well as his sister Charlotte and uncle Prince Harry, George provided plenty of photo fodder with his range of emotions.

The royal family was assembled to watch the traditional “flypast” of jets, just one part of the yearly celebration that also includes formal parades and plenty of pomp and circumstance. Dressed up around his family in full regalia, George seemed at times particularly unimpressed with the day’s proceedings as he leaned on the balcony’s edge. And the internet quickly took note of his very relatable expressions, from a face palm to his pure depiction of boredom (and, of course, some classic grins). Below, some of the best responses to his looks — which are totally understandable. He’s not even four, after all.

He also flashed smiles during the event. 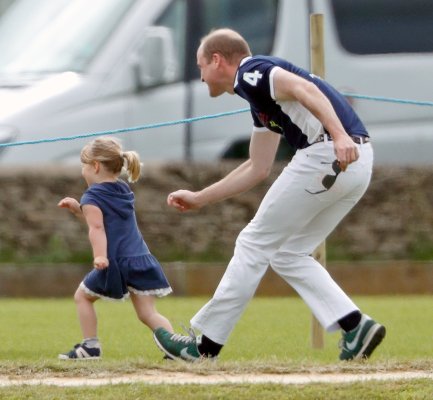 Here's Prince William Goofing Off with His Youngest Cousin
Next Up: Editor's Pick