Queen Elizabeth II turned 93 this year, her 67th birthday since she ascended the throne in 1952. However, that’s not the only birthday she celebrates this year. As always, Her Royal Majesty not only observes her actual birth date, but also her official birthday as monarch.

Here’s why the Queen has two birthdays.

Princess Elizabeth Alexandra Mary was born to the Duke and Duchess of York—later King George VI and Queen Elizabeth the Queen Mother—on April 21, 1926, making April 21 her real birthday. However, when she became queen in 1952 following her father’s death, she also began celebrating her official birthday.

Celebrating an official birthday as monarch is a practice that started more than 250 years ago in 1748 when King George II decided that he wanted a better chance of good weather on his birthday than his November birth date afforded, according to the BBC. The King solved this problem by combining his birthday celebration with an annual military parade that took place each summer, beginning the double birthday tradition.

Since then, the second Saturday of June has become the usual date of the British monarch’s official birthday.

How will the Queen celebrate her real birthday?

Queen Elizabeth typically celebrates her real birthday with an intimate family gathering. But there was also three midday gun salutes—a 41-gun salute in Hyde Park, a 21-gun salute in Windsor Great Park and a 62-gun salute at the Tower of London—to mark the occasion.

What about the Queen’s official birthday?

Her Royal Majesty’s official birthday is set for Saturday, June 8 this year and was celebrated, as per usual, with a big parade in London called Trooping the Colour. The impressive spectacle—which begins and ends at Buckingham Palace—featured over hundreds of soldiers, horses and musicians.

The Queen, as well as several other members of the royal family, participated in the procession before appearing on the Buckingham balcony as RAF planes perform an aerial display above the palace grounds. 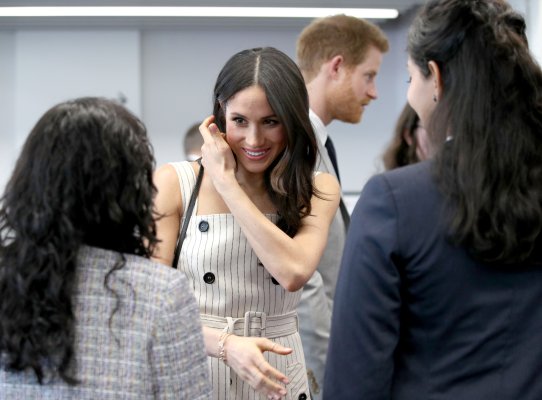 Prince Harry Knows Meghan Markle Is the Real Draw and This Is Proof
Next Up: Editor's Pick