Prince George of Cambridge being held up at a window of Buckingham Palace by his nanny to watch Trooping the Colour on June 13, 2015 in London, England.
Max Mumby/Indigo—Getty Images
By Rachel E. Greenspan

Watch out, Prince George: Some other royals want to steal your role as king of royal child antics.

Monaco’s 4-year-old Prince Jacques took lessons from the British royal by being a master spy on Sunday, with sunglasses and all, on his parents’ very important duties. The prince spied on his parents, Prince Albert and Princess Charlene, from a window in the palace as they welcomed Chinese President Xi Jinping and his wife for a meeting on trade.

Prince Oscar of Sweden also made an impression with his attention-grabbing lack of excitement at Stockholm’s Royal Palace earlier this month. The three-year-old didn’t appear to be enjoying himself as he was the only one not smiling for his camera in photos with his mother and father, Crown Princess Victoria and Crown Prince Daniel, and his big sister, Princess Estelle.

It seemed to be an unimpressive day for Prince Oscar, who frowned in most photos from the Crown Princess’ Name Day celebration.

5-year-old Prince George has earned his title as royal show-stealer in his many adorable appearances, from goofy dance moves to uncontrollable giggles. Last July, the Prince of Cambridge also spied on royal business through the palace windows, watching the Royal Air Force’s 100th anniversary celebrations with his little sister, Princess Charlotte. 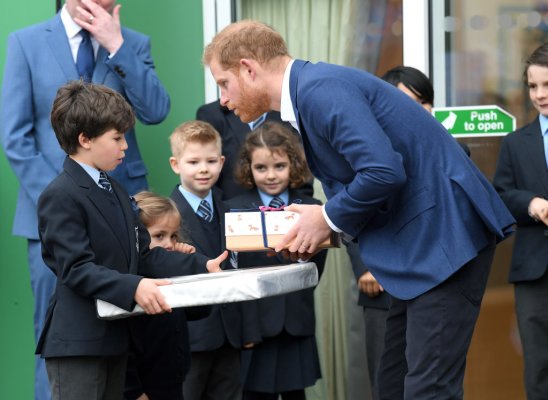 This Kid Was Convinced Prince Harry Was Just an Impostor
Next Up: Editor's Pick