At the June 2, 1953, coronation of Queen Elizabeth II, there was no question that the monarch was the star. But — as explained in this clip from the two-part documentary Margaret: The Rebel Princess —the Queen’s 22-year-old sister, Princess Margaret, drew some attention for a different reason.

Queen Elizabeth’s was the first televised coronation in British history, which meant that more eyes were not only on the Queen, but also on those around her. On that day, with a subtle gesture, Margaret ended up broadcasting her special relationship with Peter Townsend — a Group Captain in the Royal Air Force, a divorcé and an equerry (an officer who serves the King’s household and attends events with the family) to her father George VI. At the party following the event, Margaret brushed something off Townsend’s jacket, raising eyebrows in the media with her forwardness.

“I suppose it was a sign of intimacy, and that was a giveaway,” Lady Jane Vane-Tempest-Stewart, one of the Queen’s maids of honor at her coronation, says in the documentary.

The relationship between the Princess and Group Captain Townsend, which soon became public knowledge, was “the most controversial royal romance since that of Edward VIII and Wally Simpson,” TIME reported back then. Even that story got out similarly, when a photographer captured Wallis Simpson, an American divorcée, putting her hand on Edward VIII’s arm. That story came to a resolution when King Edward abdicated the throne in 1936 to marry Simpson; though there had been many objections to the possible marriage, the primary one cited was that the monarch is head of the Church of England and that church did not at the time allow for remarrying after a divorce.

As for Margaret, she had told her sister the two wanted to get married — likewise a problem because of Margaret’s place in the line of succession — but until that coronation day, “the true state of the young princess’ heart remained a family secret.”

Those who have watched Netflix’s The Crown know what happens next. The summer the news broke, Group Captain Townsend was sent to Brussels in what appeared to be a banishment. The Queen has often been depicted as pressuring her sister to dump him because the romance would look bad for the family, but some records suggest she actually had a plan that would have allowed Margaret to stay in the country and collect her salary if she gave up her succession rights.

Instead, what started out as a rebellious relationship ended in a decision that is the opposite of rebellious. “I have decided not to marry Group Capt. Peter Townsend,” Margaret announced on Oct. 31, 1955. “Mindful of the Church’s teaching that Christian marriage is indissoluble, and conscious of my duty to the Commonwealth, I have resolved to put these considerations before any others.”

Times have changed, TIME observed in its cover story on the news: “In times past, ringed about as they were with lords and ladies dependent on their favor, without the penny press to discuss their romances as they would Rita Hayworth’s, the sovereigns of England could afford to be human without fear of the consequences. Worry over his subjects’ approval was fairly far from the mind of King Henry VIII when he divorced his first wife, Catherine of Aragon, in favor of Anne Boleyn. The mistresses and mis-marriages of the first royal Hanovers newly come from Germany were far more scandalous than the prospect that scandalizes churchgoing Britons today; but in those days, royalty operated behind a bulwark of aristocracy that fenced it off safely from the people…the old Queen’s great-great-granddaughter Margaret is blessed with no such protection.”

The first part of Margaret: The Rebel Princess airs on PBS on Feb. 10 and the second part airs on Feb. 17. 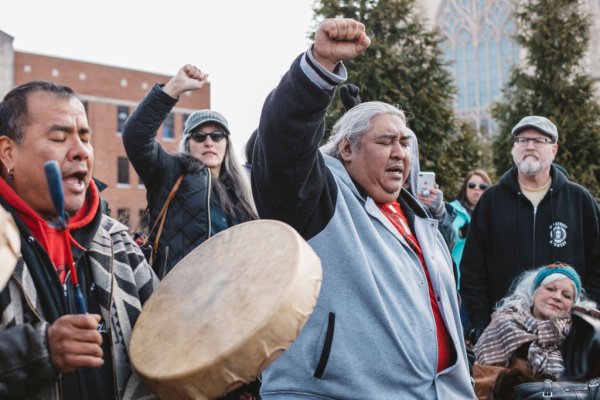 The Lesson to Take Away From the Confrontation Between High Schoolers and a Native Elder
Next Up: Editor's Pick