Everything You Need to Know About Trooping the Colour 2018

The day of the Trooping the Colour 2018, another name for the Queen’s Birthday Parade, is finally here.

The event is held annually in the U.K. to honor the Queen’s birthday, and is the official celebration of her big day. Queen Elizabeth II’s real birthday is on April 21, but the Trooping of the Colour 2018 (and all years) is conducted instead later, in June. According to the official royal website, it’s been a tradition for more than 260 years.

The odd name is a reflection of the military units on display in the London parade, from foot soldiers to cavalry and even a Royal Air Force fly-past in the skies. (A regiment receives its “colours,” or flag, and then “troops” around, or parades.) As many as 1,400 soldiers take part in the spectacle, including 200 horses and an additional 400 musicians banging out parade tunes. The official site calls it “a great display of military precision, horsemanship and fanfare,” and the Queen has only missed it once in her extensive reign — during a London strike that limited the military’s mobility, back in the 1950s.

The assembled crowds, which line the streets in the thousands, get to watch as the royal family members themselves promenade on horseback and in carriages, all culminating in an iconic photo op at the Buckingham Palace balcony. Here’s what you need to know about the annual event.

Queen Elizabeth II was born on April 21, 1926 to the Duchess Elizabeth, later Queen Mother, and the Duke of York, who later was crowned King George VI. But ever since she ascended to the throne herself in 1952, Queen Elizabeth celebrates her birthday twice annually — and it all comes down to the weather. It’s a royal family tradition that dates back to the 1700s and the reign of an earlier George, who was born in November but apparently wanted a better chance of blue skies and bright sunshine for his own birthday festivities, according to the BBC. So he grouped together an annual military parade with his official birthday celebrations, and the double whammy of the Trooping of the Colour experience was born. The ensuing monarchs have followed his lead. It usually takes place near to high summer on the second Saturday of June, when it’s more likely that England’s notoriously dour skies will be light for a change.

On her actual birthday in April 2018, Queen Elizabeth marked the occasion of turning 92 years old with a star-studded concert at London’s Royal Albert Hall featuring artists like Sting and Shaggy, Shawn Mendes and Kylie Minogue.

When is the Trooping of the Colour?

The Trooping of the Colour traditionally takes place on the second Saturday of June. In 2018, that lands on June 9. The official military site suggests that spectators arrive by 9 a.m. local time to get into place at London’s Mall below Piccadilly Circus, or on the border of St. James’s Park. The parade kicks off at about 10 a.m., and is marked by a fly-past at 1 p.m. as well.

Formal tickets need to be purchased in advance, and there are a couple of tiers available, priced from £5 to £35 each. For spectators who wish to get seats in the stands around the Horse Guards Parade, you have to apply by ballot. Unfortunately for anyone looking to make a last-minute visit to the big event, ticket sales opened early in 2018 and have fully sold out. Those who applied by ballot for seats were notified in March.

But casual viewers can crowd into the public areas and hope to get a peek at the military in their full splendor — and maybe catch a glimpse of royalty while they’re at it, no tickets required.

What is the dress code for the Trooping of the Colour?

If you got one of the official tickets, then you’ll have to adhere to the dress code for the Trooping of the Colour. The site notes that the dress code includes “morning dress dress, lounge dress lounge suit or jacket and trousers” and the “equivalent for the ladies,” with denim strictly prohibited. (No jeans!) Military personnel, meanwhile, can dress in their ceremonial attire. While hats are technically optional for ticket holders, they are recommended because of the warm weather.

The royals themselves always show up for the Trooping of the Colour in full regalia, with the military men in the family donning bright red coats, blue and gold sashes, and medals galore, while the women — including Camilla, Duchess of Cornwall, Catherine, Duchess of Cambridge and, of course, the Queen — tend to wear brightly-colored skirt suits and matching hats.

How can I watch the Trooping of the Colour online?

The events of the Trooping of the Colour will be broadcast live on the BBC in the U.K. As for a livestream, it’s likely that the BBC and some other U.K. sites will provide during the day, with video shared more broadly after it concludes.

What should I watch for at the Trooping the Colour?

So you’ve settled in to a spot on the parade route — or have switched on your livestream of the Trooping the Colour. The big moment to watch for is the official presentation of the flag, which changes each year; this time it will be the 1st Battalion of the Irish Guards who get to show off their “colour.” The assembled military perform drills to 113 spoken commands, so keep an eye out for their precision responses as they remain in tandem throughout the event, and for their sharp outfits. (Some 1,000 pots of polish or more are used each year, according to the Standard.) There’s also a musical component, if you’re into marching bands.

The other big thing to watch for is the royal family assembled in their photo op position on the balcony of Buckingham Palace. The Queen will join her family in their perch after finishing her inspection of the troops by carriage. It’s a long, hot day, and Prince George and Princess Charlotte are known to sometimes get a little bored by the goings-on — or to ham it up for the cameras, depending on their moods. This year, the addition of Meghan Markle, the newly-minted Duchess of Sussex, should be of interest to viewers. And it’s possible that young Prince Louis could even make an inaugural appearance.

Finally, at 1 p.m. the Royal Air Force performs their choreographed fly-past, which should elicit oohs and aahs from assembled viewers below. After that, it’s time to sneak in one more peek at the royals before calling it quits for another year.

The Prince of Wales, Princess Eugenie, Queen Elizabeth II, The Duke of Edinburgh, Duchess of Cambridge, Princess Charlotte, Prince George and The Duke of Cambridge on the balcony of Buckingham Palace, in central London, following the Trooping the Colour ceremony at Horse Guards Parade as the Queen celebrates her official birthday today.
Yui Mok - PA Images—PA Images via Getty Images
Subscribe to TIME 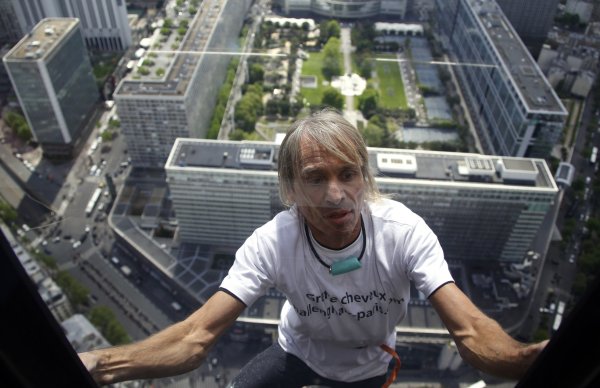