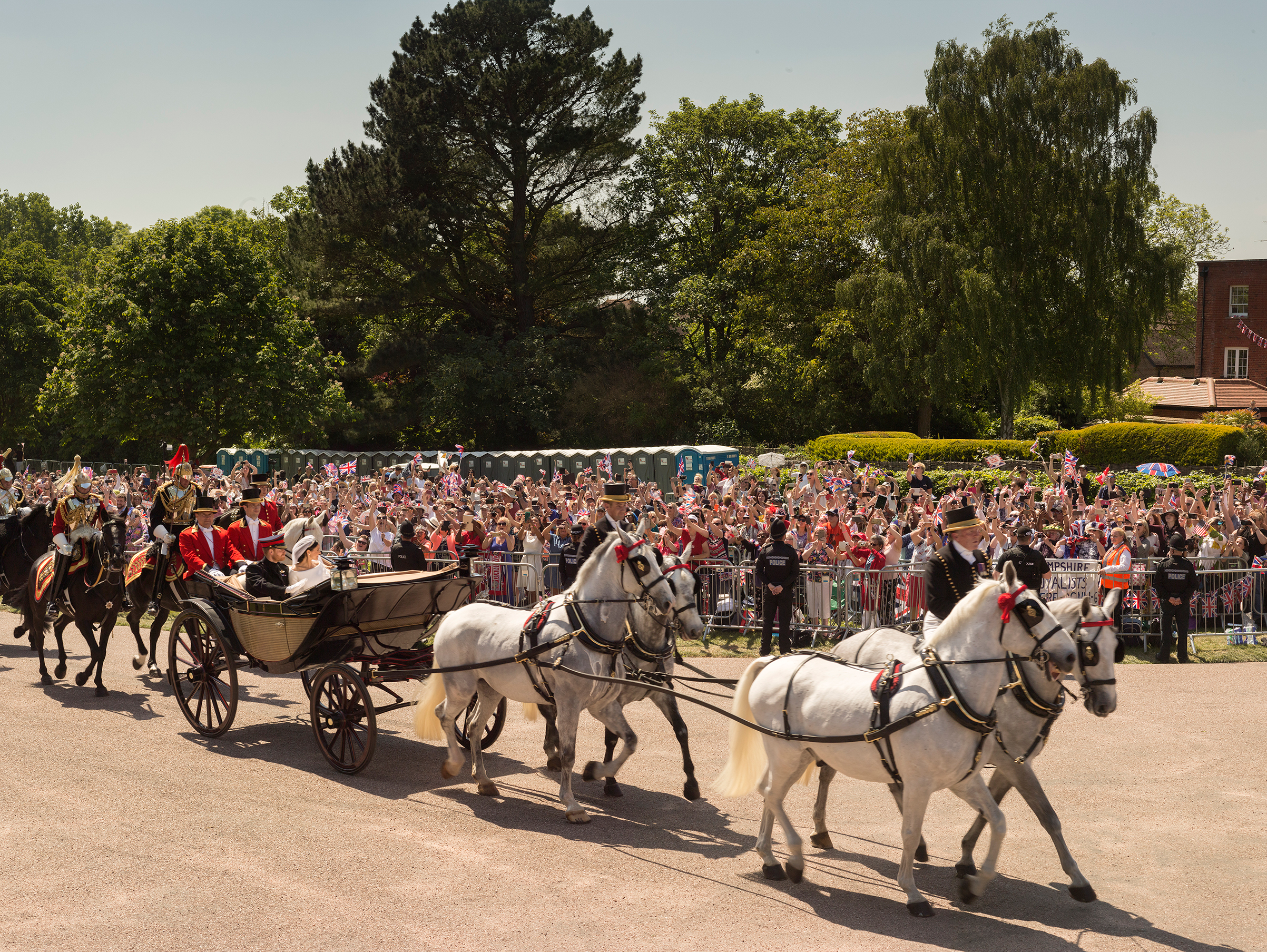 Prince Harry and Meghan Markle, the Duke and Duchess of Sussex, take a carriage ride through Windsor after their wedding ceremony on May 19, 2018.
Simon Roberts for TIME

The royal wedding of Prince Harry and Meghan Markle, in Windsor on May 19, had both pomp and circumstance. From the beginning, it was an exercise in precision: there was the arrivals of the celebrity guests—from Priyanka Chopra and the Beckhams to Oprah and the Clooneys—to the royal family to the bride herself, in a modern Givenchy gown, in a Rolls-Royce. Markle’s convoy drove past throngs of well-wishers who lined the Long Walk to Windsor Castle, having camped out for hours for a shot at a glimpse. Inside, Prince Harry, dressed in his Blues and Royals uniform, was eagerly waiting for her walk down the aisle: solo, at first, then with his father, Prince Charles.

After the ceremony, which included an impassioned sermon by Bishop Michael Curry, the newlyweds stepped outside for a kiss in front of the cameras and then hopped into a carriage for a procession around town. Photographers were there to capture it all.

Onlookers peek out from windows as a procession goes by, in celebration of the royal wedding, in Windsor.
Simon Roberts for TIME
Prince Harry and Meghan Markle wave from a carriage after their wedding ceremony.
Kirsty Wigglesworth—PA Wire/PA Images
Well-wishers along the procession route take pictures of Prince Harry and Meghan Markle.
Andrew Matthews—PA Wire/PA Images
The newlyweds exchange a much-anticipated kiss as they exit the chapel.
Neil Hall—POOL/EPA-EFE/Shutterstock
Prince Harry and Meghan Markle leave St. George's Chapel after their wedding.
Dominic Lipinski—PA Wire
Prince Harry and Meghan Markle listen to a sermon by the Most Rev. Bishop Michael Curry.
Owen Humphreys—Pool/Reuters
Prince Harry stands at the altar with Markle during the ceremony.
Owen Humphreys—AFP/Getty Images
Markle walks down the aisle in St. George's Chapel.
Danny Lawson—AFP/Getty Images
The bride arrives to St George's Chapel.
Andrew Matthews—Pool/Reuters
Queen Elizabeth II and Prince Philip, Duke of Edinburgh, arrive at St George's Chapel.
Odd Andersen—AFP/Getty Images
Prince Harry and his brother and best man, Prince William, Duke of Cambridge, arrive for the ceremony at St George's Chapel in Windsor Castle.
Lauren Hurley—EPA-EFE/Shutterstock
Meghan Markle leaves the Cliveden House Hotel, accompanied by her mother, Doria Ragland, for the wedding ceremony at Windsor Castle.
Rick Findler—AFP/Getty Images
A woman rests along the Long Walk while waiting for the royal family and guests to arrive at Windsor Castle.
Matt Stuart—Magnum Photos for TIME
Flags criss-cross a street in Windsor, near the castle where Harry and Meghan wed.
Simon Roberts for TIME
A couple kisses on a lawn ahead of the royal wedding in Windsor.
Matt Stuart—Magnum Photos for TIME
Two women talk away from the crowds of spectators.
Matt Stuart—Magnum Photos for TIME
A woman brushes her teeth on the morning of the royal wedding.
Matt Stuart—Magnum Photos for TIME
Tens of thousands of people amassed in Windsor to catch a glimpse of the newlyweds and celebrate their wedding.
Simon Roberts for TIME
More Must-Read Stories From TIME