The royal wedding wait is over: Meghan, Duchess of Sussex and Prince Harry are celebrating their wedding with an evening reception hosted by Prince Charles at Frogmore House.

Meghan will give a speech at the Saturday evening reception, according to Kensington Palace, which will host roughly 200 guests. Earlier in the day, Prince Harry gave “off-the-cuff” remarks at a lunch reception, a guest told People.

Prince Charles, who earlier in the day walked Meghan down the aisle, also gave a speech at the

Here’s everything you might have missed from Meghan and Prince Harry’s royal wedding at St. George’s Chapel in Windsor Castle.

Leaving for the reception

Prince Harry and Meghan drove off for the evening reception at Frogmore in a 1968 Jaguar E-Type Concept Zero.

Meghan wore her second dress for the evening, a Stella McCartney wedding dress with a high neck made of silk crepe.

Newly married Meghan Markle, Duchess of Sussex, wears a Stella McCartney wedding reception dress while leaving Windsor Castle in Windsor on May 19, 2018 after their wedding to attend an evening reception at Frogmore House.
STEVE PARSONS—AFP/Getty Images

After the newlyweds left the chapel for a quick kiss on the steps of the church, the Duke and Duchess of Sussex hopped in a carriage and took a ride around the grounds of Windsor Castle.

Markle walked down the aisle wearing a Givenchy dress that was designed by British designer Clare Waight Keller. She’s also wearing the Queen Mary Diamond Bandeau Tiara, on loan from Queen Elizabeth for the occasion. Her new father-in-law, Prince Charles, walked her down the aisle after her father was unable to attend.

Prince Harry and Meghan Markle in St George's Chapel at Windsor Castle for their wedding, May 19, 2018.
Dominic Lipinski—PA Wire

The ceremony started with a reading from the Song of Solomon from Princess Diana’s sister, Lady Jane Fellowes. Then, Karen Gibson and the Kingdom Choir sang a stirring rendition of “Stand By Me.” Bishop Michael Curry of Chicago gave a rousing sermon. During the exchange of vows, Markle followed in the footsteps of Kate Middleton and didn’t promise to ‘obey’ her groom, Prince Harry.

Members of the Windsor family, including Princess Anne, Princess Eugenie, Princess Beatrice and Princess Michael of Kent are making their way inside the church for the wedding of Prince Harry and Meghan Markle. Celebrity royal wedding guests including Victoria and David Beckham, George and Amal Clooney, Elton John, Oprah, Idris Elba, James Blunt, Tom Hardy are in attendance.

More than 2,600 people, including local students and charity workers who support causes close to the couple, have a front row seat to the festivities on the grounds of Windsor Castle.

Celebrities at the royal wedding

Amal Clooney and George Clooney arrive at the wedding of Prince Harry to Ms Meghan Markle at St George's Chapel, Windsor Castle on May 19, 2018 in Windsor, England.
Chris Jackson—Getty Images

Chelsy Davy arrives with guests to the wedding of Prince Harry and Meghan Markle in Windsor, Britain, May 19, 2018.
Toby Melville—Pool/Reuters

The Middleton family, including Pippa and her husband, James Matthews, have also arrived at the royal wedding. 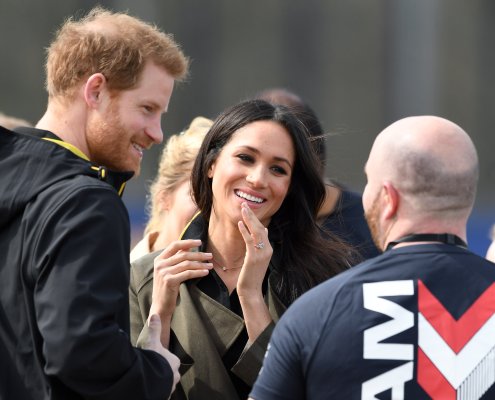 What We Know About Prince Harry's and Meghan Markle's Rings
Next Up: Editor's Pick