All eyes may be on Meghan Markle’s stunning wedding dress at her May 19 royal wedding to Prince Harry at Windsor Castle, but let’s not discount Harry’s own regal outfit for the important occasion.

Both Prince Harry and Prince William wore their Blues and Royals frockcoat uniforms. One striking difference? Prince William sported golden braids — an aiguillette — on the right side of his uniform because he was bestowed as an Aide-de-Camp to the Queen in 2013, according to Kensington Palace.

There was speculation about what Prince Harry could wear if he didn’t shave his beard. But not to worry. The Queen gave Prince Harry her blessing to get hitched in the traditional Blues and Royals uniform.

Prince Harry’s single-breasted uniform is made of blue doeskin. It has white buckskin belt with sword slings. (He did not carry a sword to church, though.)

Otherwise, Harry’s brother, the Duke of Cambridge, is basically wearing the same thing. His look, however, is topped off with the Garter Star. Both the Blues and Royals ensembles include traditional hats, too.

Prince Harry is a military man: he was trained to be an officer at the Royal Military Academy Sandhurst and served in Afghanistan twice through 2015 in the Army Air Corps, ultimately being named a Captain in the Household Cavalry’s Blues and Royals, one of the oldest U.K. regiments that is considered the “monarch’s trusted guardians.” (That’s “Blues and Royals” for short.) But he also took over the title of Captain General of the Royal Marines in 2017 after his grandfather, the Duke of Edinburgh, retired from the formal position. That title is now Harry’s most senior military role. 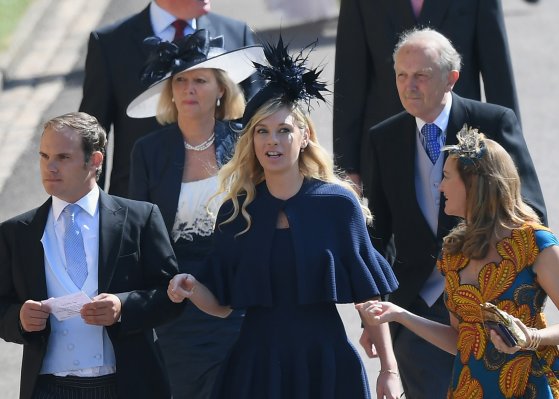 Two of Prince Harry's Ex-Girlfriends Are at the Royal Wedding
Next Up: Editor's Pick