Leave it to Victoria Beckham to steal the show at the royal wedding.

The former Spice Girl — a long-time favorite of groom Prince Harry himself — showed up with David Beckham at the May 19 wedding of Prince Harry and Meghan Markle at Windsor Castle, helping headline the star-studded celebration of their grand romance.

For this royal wedding, Beckham came decked out in deep midnight blue. Back in 2011, when she was pregnant with her daughter Harper Seven during Will and Kate’s marriage, she wore a simple navy shift of her own design.

Beckham is no stranger to royal weddings: she made a splash at Prince William and Kate Middleton’s 2011 nuptials at Westminster Abbey as well. Her relationship to Harry, meanwhile, can be traced back to a 1997 visit to Africa made by the young Prince and his dad while the singing group also happened to be on tour, leading to a meet-and-greet amongst the Spice Girls, Nelson Mandela, and the British royals, followed by other red carpet encounters and even a private high tea service with the princes.

Since then, of course, Beckham has evolved from a girl group superstar to a respected fashion designer and mother of four, regularly hobnobbing with Britain’s most elite. She even also was named an Officer of the Most Excellent Order of the British Empire, an honor bestowed by the Queen herself, in 2017. 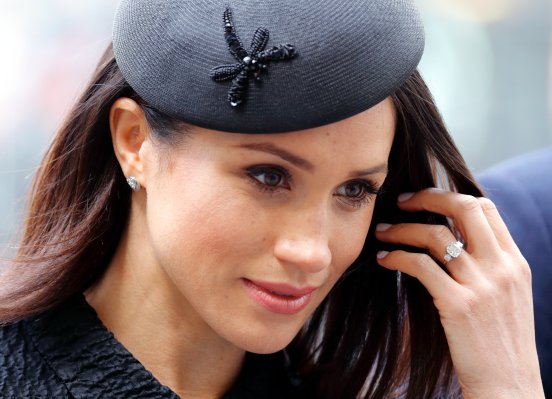 Everything to Know About Meghan Markle's Wedding Ring
Next Up: Editor's Pick