Where does the past meet the present, and who’s in charge of moving the slide rule between the two? In the opening number of Steven Spielberg’s extraordinary version of West Side Story, the white-boy New York City street gang, the Jets—led by Riff, played by Mike Faist, an angry elfin specter turned earthling—steal a bunch of paint cans from a construction site. Their plan is to deface a public mural of the Puerto Rican flag representing their rival gang, the Sharks. In their bomber jackets and ragged T-shirts, they swing their paint cans as they half-run, half-dance through the circa-1957 city streets, already a shambles in the face of urban renewal. In the space between heartbeats, two or three of the boys leap forward from the group, only to fall back again in a minutely timed hydraulic swoon. There might be a technical term for this type of sneaker-ballet glissando, but why name it? Let’s call this arc of movement—designed by choreographer Justin Peck but obviously animated by the cool sweatshirt ghost of the show’s original choreographer, Jerome Robbins—a way of collapsing time. No one needs a West Side Story remake. So how about a West Side Story reborn?

Like many—or at least many people vocal on social media—I was a doubter: I had no idea I needed this West Side Story until I saw it. This, possibly, is the best kind of movie, the stealth achievement that has been hiding in plain sight all along. Spielberg is one of the great filmmakers of our time, but he’s also one of our most affectionate, a designation that might turn out to be more important in the long run. His vision, and his knack for transferring it to the screen, is formidable. And while he sometimes falls prey to sentimentality, there are worse sins in the grand scheme of a career. There is perhaps no one better at working out the technical angles of creating an illusion; even in his failures, he never comes off as a lever-pusher, like Christopher Nolan, or a mischievous bomb-thrower, like Quentin Tarantino. Like his contemporary Martin Scorsese, he’s so old school that he practically is the school.

Read more: ‘We Need To Be in the Room.’ West Side Story’s Rachel Zegler and Ariana DeBose on Latino Representation in Film

And so his West Side Story—with its glorious Leonard Bernstein woodwinds and bongos, its ruffly “I Feel Pretty” Stephen Sondheim wordplay—comes off not like a re-creation of an older work, but like a work summoned from the memory of a feeling. To the extent that semantics matter, it might be more accurate to call Spielberg’s West Side Story—its screenplay by Tony Kushner, riffing on Arthur Laurents’ original book—a new film interpretation of the 1957 play, rather than a remake of Robert Wise’s 1961 film. There are similarities between the two films, chief among them the presence of Rita Moreno, so dazzling as the 1961 Anita. Here, the character of drug-store sage Doc—a weak point in the movie, with his lecturey howler “You kids! You make the woild doity!”—has been reimagined as Doc’s widow, Valentina, herself proof that a marriage can work when it crosses cultural barriers. Moreno plays the role with tender bravura, as if she knows the value of a second chance.

Yet the differences between the two films are perhaps even more stark, certainly in terms of casting: Natalie Wood, a huge star at the time of the first movie, was cast as Maria, her skin darkened with makeup. (She also couldn’t really sing; her numbers were dubbed by ghost-singer extraordinaire Marni Nixon.) While it has become an international pastime to waggle our fingers scoldingly at the past, the simpler solution is to start fresh with a Maria cast as she should be, as a Latina—Spielberg has chosen newcomer Rachel Zegler, who’s graceful and lovely, guileless in all the right ways but also capable of shifting her pitch to rage and fury when necessary.

Beyond those changes and a few tweaks, the framework of the story remains comfortingly familiar: Set on the Upper West Side in the days before the area became an enclave for rich or comfortably middle-class Zabar’s shoppers, this Romeo and Juliet reworking involves lovers from different backgrounds, members of rival clans who are out for blood. Maria and Tony (Ansel Elgort, moderately appealing and a serviceable dancer) meet at a dance and fall in love instantly. Maria’s brother, Bernardo (David Alvarez), forbids the match—he has a nice Puerto Rican boy, Chino (Josh Andrés Rivera), already picked out for her. Meanwhile, war brews between the Jets (the disgruntled white guys, who see their supremacy dwindling) and Bernardo’s gang, the Sharks (recent, and unwelcome, immigrants from Puerto Rico), with the lovers caught in the crossfire.

There’s a great deal of present-day moral and political resonance to be drawn from this story, and to their credit, Spielberg and Kushner draw just enough: any more would be overkill. (One potent choice Spielberg made was to not add subtitles when characters speak in Spanish. If you don’t know the language, you’re on your own—though the actors’ expressiveness will carry you.) Rather than hammer out clumsy messages of unity—that is, rather obviously, what the show is about in the first place—Spielberg revels in, and expands upon, the great beauty and energy inherent in the story, the music, the dancing. In this show, the romantic leads are almost beside the point. What you really need are great second bananas, and Spielberg’s got ’em. Alvarez’s Bernardo has the right mix of brawn and good sense; there are moments when you see him weighing the wisdom of just trying to talk sense into the headstrong Jets, before he realizes it’s impossible and gives up. Alvarez is also a marvelous dancer, muscular yet fleet, a perfect match for Ariana DeBose, as his girlfriend, Anita: in her fiery circle skirts, a cap of winsome curls setting off her sly, expressive features, she looks as if she could jolt the idiots around her out of their macho rut with just the snap of her fingers. If that were humanly possible, she’d be the person to do it.

And Faist, who has appeared in Dear Evan Hansen on Broadway, makes a wily and complex Riff. He’s a street kid with the hustle melted right into his bones—but there’s something latently sweet about him, too, as if his capacity for joy had been burned away by one disappointment too many. And his dancing has a caffeinated, angular beauty; Riff is one of those kids who feels most alive when he’s moving—no wonder he can’t stop.

The big gang showdown, gorgeously choreographed and set in a cavernous, glowing road-salt storage facility, is operatic in its intensity, a jagged symphony of testosterone and confusion that’s thrilling until it makes you heartsick. The action is at times shot from overhead, as if the camera’s eye were God’s own, gazing in dismay upon the whole snow-and-blood mess of humanity. This sequence is technically and emotionally complex, but Spielberg makes sure none of the seams show. No one should be asking why Spielberg wanted to make a musical. The question is, why did he wait so long? He showed his aptitude for it in sequences like the peripatetic swing-dance number from 1941, and the glittery Busby Berkeley-style opener of Indiana Jones and the Temple of Doom. At last, he has a large-scale musical of his own.

On top of it all, West Side Story—shot by Spielberg regular Janusz Kaminski—is possibly the most gorgeous-looking film of the year. There are eight million lens flares in the naked city, and a good half of them are in West Side Story. These strange flashes of light—sometimes appearing as stars, other times as flat UFO-style invaders—show up indoors and out, in dance sequences and intimate love scenes. Are these luminous slashes un-erased mistakes, or are they purely intentional? There’s no need to know, or to care. Oddly enchanting and otherworldly, their presence marks this West Side Story as a modern fairytale, a work of grave beauty set in a time, and in a New York, long gone. This is movie as mirage. You won’t believe it until you see it, and maybe not even then. 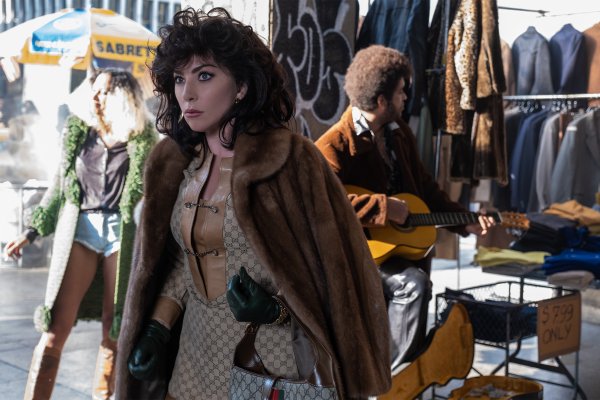 How House of Gucci's Costumes Help Tell Its Story
Next Up: Editor's Pick