The year leading up to the centennial of Leonard Bernstein’s Aug. 25, 1918, birth has been an occasion for myriad reprisals of the composer and conductor’s most famous works, from West Side Story to On the Waterfront, for which he wrote the music.

But the orchestra he conducts in the photo above is less well-known — though likewise important to his place in the history of 20th century music.

The musicians facing Bernstein comprised a group that called itself the Ex-Concentration Camp Orchestra. It included more than a dozen Holocaust survivors who are thought to have organized themselves into an orchestra while at the St. Ottilien abbey, which was serving as a displaced-persons camp. After the Holocaust, the American Jewish Joint Distribution Committee (JDC) helped organize a series of cultural ambassadors to boost morale for displaced persons and survivors, whose lives remained upended even years after World War II came to an end.

Bernstein, the son of Russian-Jewish immigrants to the United States, was part of that cohort. He came to Germany in 1948 and, on May 10 of that year, outside Munich, served as the guest conductor for two concerts by that group, at the Feldafing and Landsberg displaced-persons camps.

Bernstein would describe the experience as a moving and exhilarating one — but the concerts almost didn’t happen at all.

Leonard Bernstein with the members of the Ex-Concentration Camp Orchestra whom he conducted on May 10, 1948, outside Munich.
Gift of Henny Durmashkin Gurko, Museum of Jewish Heritage in New York, N.Y.

When Leonard Bernstein — who didn’t fight in World War II because he had asthma — was invited to conduct the Bavarian State Opera’s orchestra in Munich on May 9, 1948, he had something to prove.

As TIME noted in a 1957 cover story on the conductor, as his career took off, he’d made a conscious decision not to hide his Jewish heritage, although those close to him thought it would hurt him. His mentor Serge Alexandrovich Koussevitzky, also Jewish, “begged Lennie to change his unglamorous name so that his way to success would not be blocked by anti-Semitism,” the magazine reported, and it quoted Bernstein as saying in response, “I’ll do it as Bernstein or not at all.”

So he knew, when he went to Germany, that he was going with baggage. In a May 11 letter to his piano teacher-turned-personal secretary Helen Coates, he described the Munich concert with the Bavarian State Opera orchestra as a massive success for him and for the larger post-war project. “I had three obstacles to overcome—youth, Americanism & Jewishness,” he wrote. “It means so much…since music is the German’s last stand in their ‘master-race’ claim.”

But, though the State Opera concert eventually went off without a hitch, getting it to happen was less than smooth. Accounts of what exactly happened vary (the account of United Nations aid worker Theodore Feder suggests there was a transit strike going on; Bernstein’s own papers trace the problem to a strike by the musicians themselves) but it was during the period of logistical maneuvering that the idea was hatched for the concerts with the Ex-Concentration Camp Orchestra. The United Nations Relief and Rehabilitation Administration ended up helping to arrange transportation for the musicians, and then helped clue him in to the existence of the musicians among the nearby displaced persons.

“[The U.N.] asked, “Well, can you do something for us?” as Ivy Weingram, curator of the Leonard Bernstein: The Power of Music exhibit at the National Museum of American Jewish History in Philadelphia, which has a display on the concert, paraphrases. “So the U.N., with the JDC, asked Bernstein if he’d take this side trip to Feldafing and Landsberg.”

Program for Sheerit Hapleitah (which has been called the "The Surviving Remnant" or the "Orchestra of Last Survivors") concert outside Munich, Germany, dated May 10, 1948.
Gift of Henny Durmashkin Gurko, Museum of Jewish Heritage in New York, N.Y.

A letter in the JDC’s archives backs up the idea that the displaced persons camp concerts were planned last-minute. “Arrangements” were done the “eleventh hour” and “with fingers crossed,” according to a Jun. 3, 1948, memo written by Charles Malamuth, head of publicity for the JDC in Europe, to the organizations’ headquarters office.

In any case, it worked. Harry Bialor, 88, a Polish survivor who now lives in Brooklyn, N.Y., says he was a conservatory student and saw Bernstein’s Feldafing concert, watching from the second or third row.

“It was a hot day, the place was packed, and he took off his jacket and he said, ‘We’re all going to sweat together,’ in Yiddish,” he recalls. “We were shocked; we weren’t expecting that. It made me study my music harder after I met him. I really dug in.”

Among the songs played during Bernstein’s visit were George Gershwin’s “Rhapsody in Blue,” works from Puccini’s Tosca, Verdi’s Rigoletto, Bizet’s L’Arlésienne and Weber’s Freischütz. He did one concert at Feldafing in the afternoon and one at Landsberg in the evening, and then gave a bonus concert later that night, playing the run-down piano in the mess hall of Landsberg.

The DP camp concerts were “almost more exciting” to him than the Munich concert was. “I was received by parades of kids with flowers, and the greatest honors,” Bernstein wrote to Coates. “I conducted… Freischütz of all things and cried my heart out.”

The fact that Bernstein conducted both the State Opera musicians and the displaced persons was not uncontroversial. Only three years had passed since Germany surrendered in World War II on May 7, 1945, and Bernstein apparently came off as oblivious of the extent to which Jewish people would condemn any contact with Germans. “Apparently, he does not know the difference between a German orchestra and a Jewish DP orchestra politically,” Malamuth wrote, describing him as a “very nice” person, just “politically very naive and uninformed.”

As current JDC archivist Linda Levi summed up the controversy to TIME, “Officials were afraid that if the Jews heard about this, they would be furious.” She says that the concert’s organizers deliberately didn’t mention the Bavarian State Opera concert the night before so that it wouldn’t color their enjoyment of the displaced persons camps’ orchestra. The JDC also had an incentive to make sure Bernstein had a good time with the musicians, because they were hoping that he would help the most talented ones immigrate to America. For instance, he helped concentration camp survivor David Arben get into the Curtis Institute of Music in Philadelphia; Arben became a violinist with the Philadelphia Orchestra for more than 30 years. (Families of others who were there have put up video testimonials online.)

Bernstein appeared to receive one physical souvenir for his time with the displaced persons camp residents. He told his secretary to be on the lookout for “a package containing a real concentration camp costume which they gave to me,” warning her, “Be particularly careful of it—it’s a great possession.”

In the abstract, what kind of effect the concert had on his future compositions is a matter of interpretation. But the fact that he left behind an unfinished opera inspired by the Holocaust, dubbed Babel, which he was working on the year he died, is one clear sign of how that period affected him. He once described the central theme of his work as “the struggle that is born of the crisis of our century, a crisis of faith.”

Bernstein’s concert for Holocaust restored faith in some of those who saw him. The concerts, recalls Bialor, “meant that somebody cares. Somebody important cares. Jewish life is flourishing, and you can’t hold it back.” 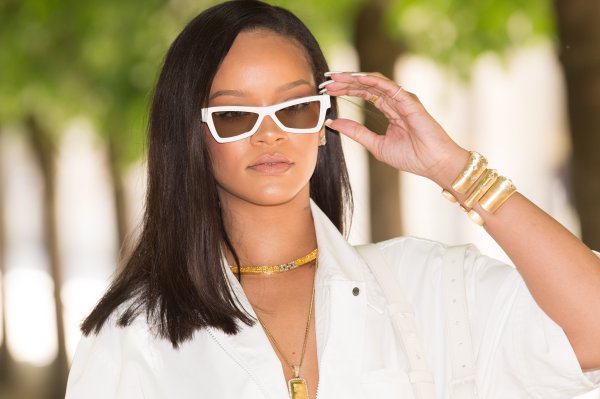 The Latest Glimpse Into Rihanna's World Has Fans Excited
Next Up: Editor's Pick