Hollywood Has the Power to Combat Damaging Stereotypes About Latinos. Here's Proof That It's Utterly Failing

Eva Longoria attends the Hollywood Foreign Press Association's Annual Grants Banquet at Regent Beverly Wilshire Hotel on July 31, 2019 in Beverly Hills, California.
Axelle/Bauer-Griffin—FilmMagic
Ideas
By Eva Longoria and Stacy L. Smith
Longoria is an award-winning actress, producer, director, activist, entrepreneur and philanthropist. She founded the Eva Longoria Foundation in 2012 to help Latinas build better futures for themselves and their families through education and entrepreneurship.
Dr. Stacy L. Smith is a professor at the University of Southern California where she is also the founder of the Annenberg Inclusion Initiative.

It’s time to confront the way we see and treat Latinos in America. As we grapple with the enduring effects of a horrific attack on Latinos doing their Saturday shopping, a government that locks Latino children in cages, and leaders and news media outlets who spin vile, racist rhetoric, it is clear something must be done.

But it’s not just those in the political sphere who have a role to play in combating the false and damaging narratives about Latinos in our society. Even our biggest, most popular stories exported around the globe — Hollywood movies — often erase and fail to show humanizing portrayals of Latinos.

It is no secret that fictional storytelling offers an opportunity to inspire and shape the views of an audience. Yet on Monday, a study by the USC Annenberg Inclusion Initiative, the National Association of Latino Independent Producers (NALIP) and Wise Entertainment found that across 1,200 of the most popular films released from 2007 to 2018, only 3% of protagonists were Latino, and Latinos made up just 4.5% of all speaking or named characters. This despite the fact that Latinos account for 18% of the U.S. population and 23% of movie ticket buyers.

The results also show that the depiction of Latino characters in these films — as criminals, in poverty or without any links to a rich Latino heritage or community — dramatically extends the scope of the problem. We know from research that dehumanization on screen can increase the risk of aggression, in this case, toward Latinos in the U.S. and abroad.

Beyond that, there’s the issue of erasure. Of those 1,200 top movies, 568 did not feature even one Latino speaking character, and 828 were missing a Latina girl or woman on screen. What’s more, 99% of the movies across 500 top films from 2014 to 2018 did not include Latino LGBTQ characters, and 97% of 400 top movies from 2015 to 2018 failed to portray a Latino with a disability. This glaring lack of representation does nothing to counter hate-filled messages toward Latinos. Instead, it tacitly reinforces the dangerous and anti-American views espoused by political figures and some news outlets.

So, what can be done?

The process of authentic storytelling starts with storytellers. Hiring more Latino creatives is a crucial first step to changing the narratives that have long excluded or stereotyped the community. And while it’s easy to think that because four of the last five Academy Award-winning Best Directors were Latino the problem is solved, that is not the reality. As it stands, only 4% of the directors helming the 1,200 top movies over the past 12 years were Latino. This amounts to 28 individuals, of whom the vast majority (71%) were born outside the U.S., where the likelihood for artistic support from government funding tends to be much higher.

We also need more Latinas behind the camera. Of those 28 directors, only 1 was a Latina. That means one choice to hire out of 1,335 employment opportunities. We are pleased to share that this number will double, as one of us (not the academic!) will be making her feature directorial debut in 2020 with the film 24-7, and following that with the just-announced Flamin’ Hot. These movies and two other films from major studios made by Latina directors in 2019 (Breakthrough, Queen & Slim) should create a slight uptick in these dismal numbers. But four or five films in 14 years is not enough. We need Latinas from a variety of backgrounds helming top motion pictures with large budgets that succeed and fail at the same rate as movies by their white male peers.

Changes behind the camera can shift stories away from the outdated stereotypes that mirror the divisive and dangerous rhetoric about Latinos that has dominated our news cycles, presenting instead a nuanced picture of this vibrant and multifaceted community. This means showcasing Latinos as characters working in government, finance, higher education, STEM and leading Fortune 500 companies — in other words, showing the world as it is and offering Latinos the aspirational portrayals that have long been awarded to other groups.

It’s time for Hollywood to commit to producing, not just developing, movies at studios; films with Latinos at the center need to be green-lit, produced and reviewed by and for both Latino and non-Latino global audiences. Netflix and Amazon have already recognized this and are pursuing a strategy that invests in and locates production in Latin America and Spain — with investments in original content across multiple countries. Traditional Hollywood studios can either fall behind or begin serving this segment of the population.

Lastly, eliminating the epidemic of invisibility is essential. If two Latino characters were added to every film across the 100 top movies each year to set a new norm, and this process was repeated over three years, proportional representation would be achieved. Decision-makers must stop making excuses about why productions can’t be more inclusive (and refusing to accept that one film in production is sufficient). They must start recognizing the talent that exists and has historically been overlooked. Period. Taking this commitment seriously should not only result in seeing more Latinos on screen, but greater representation of other marginalized groups as well.

These efforts should not represent a revolution, but merely a reset for Hollywood, whose professed opinions on inclusion often do not match their practices. When the entertainment industry does wield storytelling to create change, the results are undeniable. In the 1940s, films were used to inspire soldiers with the ideology we sought to protect in World War II. Marriage equality became a reality after our living rooms hosted the LGBTQ community through Will and Grace or The Ellen Show. These are just two examples of how entertainment can offer a point of connection where there isn’t one, inspire our better natures and radically shift our viewpoints.

As a nation, we cannot afford to wait any longer to shift the narrative around Latinos. It’s time for Hollywood to step into their power and end decades of erasure, stereotyping and marginalization. Perhaps then our leaders will do the same. 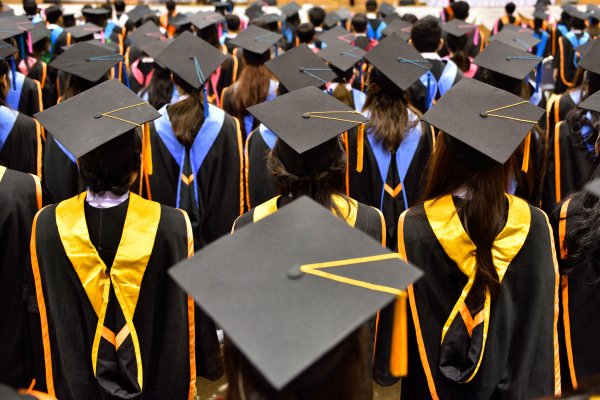 Americans Are Drowning in $1.5 Trillion of Student Loan Debt. There’s One Easy Way Congress Could Help
Next Up: Editor's Pick