Natalie Wood: What Remains Behind Illuminates a Star Who Believed in Her Craft and Fought for Her Privacy

Because humans, for whatever reason, are drawn to sensationalism, Natalie Wood may now be better known for her mysterious death than for her work as an actor. That’s why the HBO documentary Natalie Wood: What Remains Behind, premiering May 5, exists. As Wood’s daughter Natasha Gregson Wagner explains early in the film, the strange and tragic circumstances of her mother’s death have come to overshadow everything she accomplished, in a career that stretched for nearly her entire life span. With What Remains Behind, Gregson Wagner, one of the film’s producers and the key lens through which its vision is filtered, seeks to shift our attention to Wood’s true legacy: The extraordinary charm and fire she brought to the screen, beginning with her first roles as a child actor in the 1940s.

What Remains Behind—directed by Laurent Bouzereau—is a respectful, though not necessarily varnished, look at what made Wood one of the most dazzling actors of the last half of the 20th century. (Its title contains a redundancy, but perhaps we can forgive it that.) Bouzereau and Gregson Wagner have assembled a number of Wood’s longtime friends—among them Robert Redford, Richard Benjamin and Mia Farrow, as well as playwright Mart Crowley—who describe in vivid detail the person they knew, a woman who was devoted to her craft but also fought for her privacy. Gregson Wagner also conducts on-camera interviews with the two men she calls “father”: She was born to Wood and her second husband, agent, producer and screenwriter Richard Gregson, though from the age of two she was essentially raised by Robert Wagner, who was married to Wood from 1957 to 1962, and then again from 1972 until Wood’s death. Gregson Wagner grew up referring to the two men as Daddy Gregson and Daddy Wagner, to avoid confusion in a sprawling, extended, close-knit family that included a number of half-siblings and step-siblings. (Wagner’s daughter with actor Marion Marshall, Katie Wagner, also appears in the film, as does Wagner’s daughter with Wood, Courtney Wagner.)

Two Natalie Woods emerge in What Remains Behind: The first is a performer who, despite the translucent beauty of so many of her performances, knew how to control her image and fight for her rights in a Hollywood system that was anything but egalitarian. Audiences of a certain age grew up with Wood: At age 9, she played the astute Santa skeptic Susan Walker in the 1947 Miracle on 34th Street; footage from the film reminds us how captivating she was, a preternaturally perceptive little being who knew how to convey, without ever being maudlin, that feathery, elusive sadness specific to childhood. Clips from Elia Kazan’s Splendor in the Grass (1961) and Paul Mazurksy’s Bob & Carol & Ted & Alice (1969) show her growth as a performer. She was capable of piercing emotional nakedness, but also of conveying sly, almost otherworldly wisdom: In Mazursky’s film, it’s her character’s tenderness, and her good sense, that sets the tone for the movie’s deeply moving conclusion, an affirmation of marital commitment even when free-floating sexual attraction threatens it. The film clips in What Remains Behind work exactly as Gregson Wagner wants them to, showing Wood as a luminous, blazingly intelligent presence. And as film journalist Julie Salamon points out in an interview, it’s sad that we didn’t get to see all that Wood could do: In the time she had, she was continually open to expressing the shifting gradations that come with age and experience.

But Wood was also, as this documentary shows, fiercely protective of her private life and her time with her family. Gregson Wagner, who was 11 when her mother died, describes a home life of lively holiday parties (attended by the likes of Fred Astaire and Sir Laurence Olivier) and sturdy family affection (clips of Wood as a young mother show a woman in pigtails and big glasses, as far from Hollywood glamour as you can get, but radiant in a backyard-mom way). What Remains Behind also addresses Wood’s insecurities and superstitions (her mother, presented as a controlling and melodramatic figure, probably intensified both), and a particularly dark episode in which she attempted suicide by ingesting sleeping pills, though she immediately ran to her friend Crowley for help.

Wood and Wagner’s love story is part of Wood’s complicated legacy. Wagner was one of the three people who last saw Wood alive: In November 1981, at age 43, she drowned in the Pacific Ocean just off Santa Catalina Island. The night before her body was found, she and Wagner had been on board their boat, The Splendour, along with the actor Christopher Walken and the ship’s hired captain, Dennis Davern. Wood was found floating in the water the next day, but none of the other passengers could say how or when she left the boat, or how she drowned. The death was ruled an accident, though in 2011, the Los Angeles County Sherriff’s Department reopened the investigation, and in 2018, the department named Wagner a person of interest, reasoning that since he was one of the last people to see her alive, he could be key in determining what really happened that night.

In What Remains Behind, Gregson Wagner sits down with the man she calls Daddy Wagner and asks him directly about that night and the events afterward. Her questions aren’t hostile, but they are unsparing, especially considering these two are part of a large, extended family that appears to have remained close. As Wagner answers, the camera lingers on his face—still dashingly handsome—as if to ferret out clues: Does he know anything about Wood’s death that he hasn’t told us? Anyone who watches Natalie Wood: What Remains Behind, is likely to scrutinize that face in the same way. Faces, especially those of actors, aren’t always reliable; they don’t give us facts. But then, they often tell us more than words do. The facts, in this case, are elusive, but there’s at least one truth you can read in this face: It belongs to a man who has suffered. 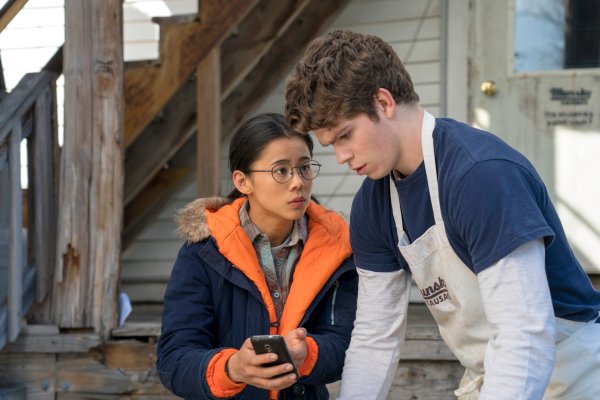 Teen Drama 'The Half Of It' Is Tender and Alive
Next Up: Editor's Pick