In the world of franchises, sequels, reboots and remakes, there are true fans and then there’s everybody else. In early 2019, as filmmaker Jason Reitman was preparing Ghostbusters: Afterlife, he took heat for asserting during an interview that his film would “hand the movie back to the fans,” a quip everybody, understandably, read as a dig at Paul Feig’s ill-fated 2016 remake, featuring women actors in the lead roles.

Reitman quickly backtracked, claiming he had “nothing but admiration” for Feig and his actors. But as it turns out, his clarification was beside the point. Ghostbusters: Afterlife—not a remake but definitely a sequel—does cater, heavily, to those who have made a weird religion out of the 1984 original (which was directed and co-written by Ivan Reitman, Jason’s father, also one of this new film’s producers). Is it the younger Reitman’s fault that, in making a modern film that also in some ways honors the work of his father, he has also fed into the tyranny of fandom? Maybe not. But whatever his intentions were, Ghostbusters: Afterlife isn’t original or appealing enough to stand on its own. Maybe it really is only for true fans—the rest of us most likely have better things to do.

Read More: How Ghostbusters: Afterlife Fits Into the Long-Running Franchise

A broke single mom, Carrie Coon’s Callie, rounds up her two kids, awkward teen Trevor (Finn Wolfhard) and shy science nerd Phoebe (Mckenna Grace), and treks to the farmlands of Oklahoma. Her father, from whom she’s long been estranged, has recently died; he’s left her a decrepit house bedecked with the kinds of ominous, hand-painted signs often made by country crazies in the movies. Dad, it turns out, was none other than Ghostbuster Dr. Egon Spengler (played by Harold Ramis in the original film and its sequel; he also cowrote the scripts for both movies). Having alienated his fellow Ghostbusting pals (played by Dan Aykroyd, Bill Murray and Ernie Hudson, all of whom return here for some gently amusing ghostbusting high jinks), he’d grown more and more eccentric and withdrawn in his later years, obsessively keeping watch for a cataclysmic supernatural event he felt certain was coming.

Sounds nuts, right? Then Phoebe finds a ghost trap on the property, and begins monkeying around with it—local science teacher Mr. Grooberson (Paul Rudd), who is also conveniently handsome enough to double as a love interest for Callie, helps her figure out how it works. They succeed in catching a joobly-oobly ectoplasmic thing, though a nearby abandoned mine apparently holds larger, darker secrets, ones that not-so-crazy old Spengler was apparently hip to.

You could conceivably do something with that plot, and Ghostbusters: Afterlife has its modest charms. With its semi-old-school special effects—who isn’t a little nostalgic for those staticky, zig-zaggy ghostbuster-gun effects?—it seeks to delight us with its homespun wholesomeness. And mostly, its gentle adventurousness seems fine for all but the littlest, most anxious kids. There’s even an army of mini Stay-Puft Marshmallow Men, angry and adorable at the same time, if you discount the fact that they rip more than a page from the Minions handbook.

That said, it takes forever for any ghosts to get busted—and that plot device seems like an afterthought, anyway. Ghostbusters: Afterlife is less about zapping ghoulies than it is about Family, Reconnection and Forgiveness, which by now should be trademarked entities like Pepsi, Saran Wrap and Legos. Never funny or disreputable, Ghostbusters: Afterlife feels fully parent-approved—and where’s the fun in that?

Worst of all is the mawkish role it fashions for Ramis—who died in 2014—to play from beyond the grave. Before Ghostbusters: Afterlife is done with us, there is much hugging and many tears. The movie is geared to plink at heartstrings, and it sets about that task with grim determination. If the original Ghostbusters was a huge part of your childhood, one that continues to inform your adulthood, maybe Ghostbusters: Afterlife is for you. But as Johnny Thunders—who surely would not approve of this excessively eager-to-please movie—once sang, “You can’t put your arms around a memory.” And no one needs a movie that leaves them with an armful of air. 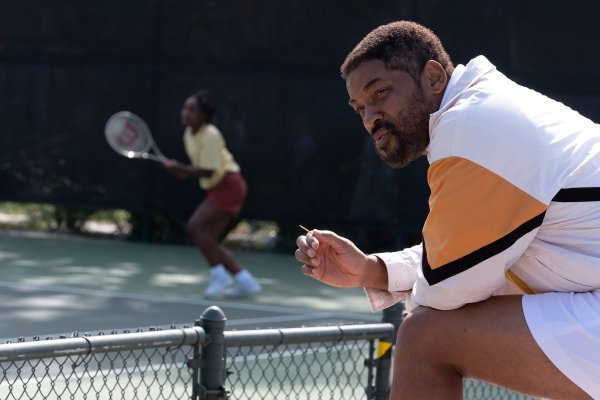 What King Richard's Story of an Uncommon Dad Means for the Rest of Us
Next Up: Editor's Pick