An Elegy for Dickinson, the Weirdest, Most Wonderful Show on Apple TV+

Apple TV+ entered the streaming horse race, two years ago, with a modestly sized stable of splashy originals. The Morning Show boasted a cast led by Jennifer Aniston, Reese Witherspoon and Steve Carell. For All Mankind paired Battlestar Galactica and Outlander creator Ronald D. Moore with an alternate-history scenario in which the Soviets won the space race. Far-future fantasy epic See spent something like $15 million per episode on beautiful shots of Jason Momoa tromping through forests. And then there was Dickinson, a deeply odd, anachronistic period piece from first-time creator Alena Smith that cast actor and singer Hailee Steinfeld as a young Emily Dickinson.

While the others had their partisans (though I’ve never actually met a fan of See), Dickinson was the surprising early breakout, earning an instant, vocal fan base and paving the way for Apple’s success in the comedy niche with shows like Ted Lasso and Mythic Quest: Raven’s Banquet. In retrospect, I think Smith’s bizarre creation caught on—amid so many voluminous streaming slates padded out with interchangeable titles—because it felt so alive and impassioned, in all its messiness. That emotional momentum kept building, and now it suffuses the show’s third, final and most ambitious season.

Rooted in an intelligent, wild, sensuous performance from Steinfeld (who is also an executive producer), Dickinson remixes facts, hypotheses, rumors and daydreams about the famously reclusive poet’s life into a buoyantly implausible family dramedy. We meet Emily in her hometown of Amherst, Mass., as she’s standing on the precipice of adulthood. She’s the favorite of her father Edward (Toby Huss), a prominent local politician who fears that allowing her to publish would bring disgrace upon his name. Her mother (Jane Krakowski), known only as “Mrs. Dickinson,” and sister Lavinia (Anna Baryshnikov) are traditional 19th-century women, fixated on marriage and housework. At least Emily has found the love of her life: her childhood best friend Sue (Ella Hunt), who’s destined to wed Emily’s brother Austin (Adrian Blake Enscoe).

To her family’s great dismay, the rebellious Emily has no intention of marrying. Why would she waste the rest of her life keeping house for some man and his children when she could be writing brilliant poetry to her secret paramour? Anyway, she’s far too morbid and mercurial for most suitors’ taste. She sees things—like a human-sized version of the bee from her poem and a horse-drawn carriage whose passenger is Death, as personified by the rapper Wiz Khalifa. “You’ll be the only Dickinson they talk about in 200 years,” he promises, passing her a joint.

As this detail suggests, the show mixes realism and fantasy, the 19th century and the 21st. Steinfield’s Emily has an antecedent (or descendant?) in “misery chick” Daria Morgendorffer, though she’s also prone to moments of exuberance. Alongside a pop soundtrack featuring artists that might appear on a modern-day Dickinson’s Spotify playlist, like Mitski and Courtney Barnett, Smith peppers the dialogue with contemporary phrases and ideas. “I just don’t know why this had to happen in our 20s,” one character whines in the new season, referring to the Civil War. Dickinson has a knack for casting the perfect guest stars—usually comedians—in the roles of famous historical figures. In that respect, season 3 over-delivers, giving us Billy Eichner as Walt Whitman, Ziwe Fumudoh as Sojourner Truth and (in a contrivance I’ve been asked not to explain but which you could probably guess) SNL’s Chloe Fineman as Sylvia Plath.

These stylistic choices can be jarring. Along with scenes where revelers grind on each other at antebellum Amherst house parties, I mistook them at first for cheap ploys to make Emily Dickinson seem hip to young viewers. But the anachronisms aren’t an empty gimmick. They recontextualize the poet and her work—which often appears on screen in illuminated lettering—scribbling over the stiff black-and-white portraits to reveal a truly colorful character.

The final season adds yet another dimension, albeit one for which Smith has been laying the groundwork since Death prophesied the Civil War in the series premiere. Following a perceptive second season in which Emily grappled with her ambivalence about publishing poems and achieving fame, the new episodes find her pondering her role as a poet during wartime. Physically safe but spiritually agitated in her New England bedroom, she processes, through her poems, friends’ deaths, a national schism, the destruction wrought by slavery.

The season offers satisfying resolutions to the Dickinsons’ interfamilial conflicts—which in some cases means illustrating why they can never be resolved. A rift between Edward and Austin forces Emily to confront her father’s flaws. And without sacrificing humor, the show adds depth to characters like Mrs. Dickinson and Lavinia, who in earlier seasons mostly provided comic relief. We see how the strictures of traditional womanhood can also harm women who embrace it. (Baryshnikov has become a particular asset to the cast, and this season she’s at her best, spinning her mourning for all the fallen soldiers she never got to date into avant-garde performance art.)

Smith has also increasingly worked to give this story a worldview beyond the Dickinsons’ cosseted household. In its final stretch, she ties the Amherst home front to the battlefield by entwining Emily’s story with that of her neighbor Henry (Chinaza Uche), a Black, abolitionist journalist from seasons past, who goes south to aid the Union cause and ends up teaching literacy to formerly enslaved soldiers (whom white abolitionists are suspiciously hesitant to arm). In making this connection, Dickinson leaves us with a message for our own times. Even in the darkest days, words matter. 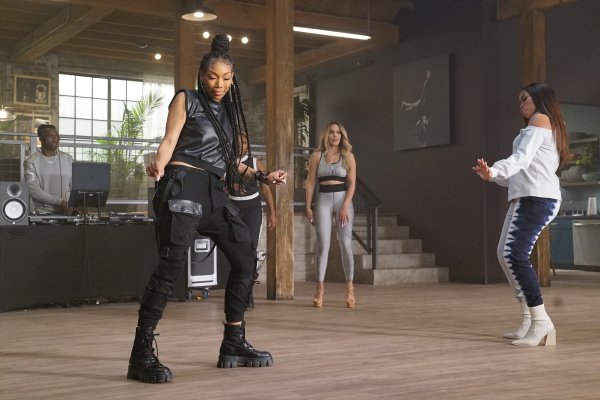 The 5 Best New TV Shows Our Critic Watched in October 2021
Next Up: Editor's Pick