What to Watch—and What to Skip—on Apple TV+

We don’t exactly need more television in the year 2019, but we sure are getting it. When it launches on Friday, Nov. 1, Apple TV+ will kick off a new generation of streaming services that includes Disney+, debuting on Nov. 12, and HBO Max, which is slated to arrive next year. And while the tech giant’s initial lineup of originals can’t compete with the vast content libraries of its competitors, there is some good stuff in the mix. To help you decide whether to plunk down $4.99 a month for Apple TV+, I screened all of the new series provided for advance review. (Oprah’s Book Club and a handful of children’s programs also set to premiere Nov. 1 were not sent to critics.) Here’s a breakdown of what to watch, what to skip and everything in between.

Is the flagship show from Apple TV+ everything a drama à clef about morning television in the #MeToo era should be? Probably not. The intersection of feminism, fame and media deserves more depth—and more boldness—than early episodes of The Morning Show provide. Still, it’s pretty enjoyable to watch Reese Witherspoon, Jennifer Aniston and Steve Carell play versions of the sanitized personalities with whom so many of us start our days. A supporting cast that includes Mark Duplass, Gugu Mbatha-Raw and The Diary of a Teenage Girl star Bel Powley is just as strong. Add in solid dialogue, quick pacing and decent production values, and the result is addictive, if not quite revelatory, viewing. (For more on The Morning Show, read my full review.)

A hit at film festivals earlier this year, this nature doc from Victoria Stone and Mark Deeble follows a family of African elephants—led by 50-year-old matriarch Athena—as they trudge from one watering hole to the next, in search of hydration, sustenance and relief from the oppressive heat. The filmmakers get astonishing, often adorable, footage of the pachyderms trekking, playing and caring for one another. And Chiwetel Ejiofor provides gentle narration, introducing many animals who round out the elephants’ ecosystem, from the frogs and turtles who make homes in their wading pools to the dung beetles who… well, you can imagine. One note of caution: Though The Elephant Queen is a family film, and it never devolves into a total downer, Athena’s clan eventually weathers a drought. Stone and Deeble don’t turn away from the tragedies that follow, in what might be a tough watch for very young viewers.

“Red Moon.” That’s the newspaper headline on June 27, 1969 in the America of this solidly constructed alternate-history drama, which games out how the 20th century might’ve gone if the Soviets had beaten the United States to the moon. As a prolonged space race unfolds, creator Ronald D. Moore (the cult TV maker behind Battlestar Galactica and Outlander) imagines a demoralized NASA, where The Killing star Joel Kinnaman’s disgruntled astronaut Edward Baldwin sabotages his own career with a drunken rant to a reporter about the cowardice of the organization’s leaders. Meanwhile, in a subplot that’s sweet and timely but feels tacked on, a Mexican girl crosses the border with outer space on her mind. If you’re intrigued by that premise—and neither exhausted by ‘60s period pieces where brilliant, flawed men brood as brilliant, perfect women endure retro sexism, nor put off by frequent scenes of mission control guys frantically mashing buttons—For All Mankind is going to be your show. If not, there’s little else to see here.

There are straight-faced alternate histories, and then there’s this bonkers show, which poses the question: What if Emily Dickinson, but too much? In an unexpectedly excellent casting choice, Hailee Steinfeld plays the poet as a mercurial, mischievous, proto-goth teen (think Aubrey Plaza with a sugar high) who’s desperate to escape the domestic sphere. Obstacles to her liberation include a mother who’s obsessed with housework (Jane Krakowski in “zany Jenna Maroney project” mode), a fond but sexist dad (Toby Huss) and a brother (Adrian Enscoe) who insists on marrying Emily’s best friend and secret lover (Ella Hunt). Episodes inspired by poems juxtapose 19th-century visuals with contemporary-ish language, pop music and such YA archetypes as mean girls (and an inexplicable gay Japanese teen whose depiction made me cringe). The Dickinson kids throw an opium-fueled rager, grinding to rap in floor-length gowns. Emily escapes her home, one night, to snuggle with the personification of Death—played by an extremely high-looking Wiz Khalifa—in a carriage pulled by ghost horses.

The show is kind of a mess, veering between empathetic depictions of its hero’s struggles against the social norms of her time and slapstick humor that recalls Comedy Central’s costume-drama parody Another Period. Yet it’s never boring. And to the extent that it represents Apple’s bravery in taking on a strange project from a first-time creator, Alena Smith, Dickinson may be the most promising show to come out of the service’s initial lineup.

As TV execs scramble to find the next Game of Thrones, you can’t blame a new platform for throwing money at a big, silly genre show. But, at a reported cost of $15 million per episode, See is both bigger and sillier than most of its competition. Starring Khal Drogo himself, Jason Momoa, the sci-fi/fantasy hybrid takes place hundreds of years after a 21st-century virus wiped out all but 2 million humans, leaving those survivors—and, for some reason, all future generations—blind. Society has long since reorganized itself around sightlessness, a process that apparently entailed regressing into primitive, superstitious, warring tribes. Momoa’s Baba Voss is, unsurprisingly, a distinguished warrior with a heart of gold, who’s raising twin babies fathered by his new mate’s old lover as his own. The twist is that the kids and their biological dad, a guy who happens to be the object of a cruel charlatan queen’s (Sylvia Hoeks) obsession, can see.

It isn’t a hopeless setup, though the idea that universal blindness would bring out the worst in humanity for centuries to come may verge on ableism. Yet the execution, particularly in scripts by Steven Knight (of January’s box-office bomb Serenity), is an unmitigated disaster. Speaking with that grand, stagey inflection I think of as Fantasy Voice, characters say things like: “I feel savage intent in the air.” Sex scenes, including what may well be the most awkward masturbation sequence in the history of television, are uniformly creepy. The plot has more holes than a sieve. Aside from Momoa doing what he does best—fighting, grunting, snuggling—Alfre Woodard gives the only memorable performance. Costumes look recycled from a dozen medieval or post-apocalyptic movies, though the queen could be an Anthropologie model. Director Francis Lawrence (who helmed the final three Hunger Games movies) gets in some lovely nature shots, but the massive amount of screentime devoted to combat and foot travel can be mind numbing. Not to put too fine a point on it, See is one of the worst TV series I’ve seen in years. 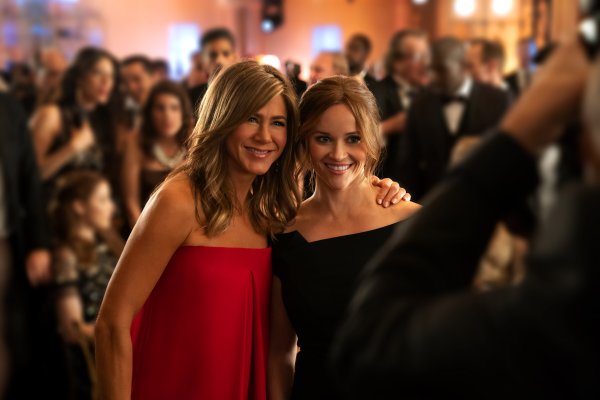 Apple TV+ Flagship The Morning Show Is Binge-Worthy But Frustrating
Next Up: Editor's Pick