H.R. 4, the John Lewis Voting Rights Advancement Act, passed the House in August. It has been blocked by Republicans in the Senate.
Anna Moneymaker—Getty Images
Ideas
By Kate Shaw
Shaw is a professor at Cardozo Law School and a co-host of the podcast Strict Scrutiny.

This week, Senate Republicans fourth voting-rights legislation for a third time since Democrats took control of the Senate in January. Although earlier defeats failed to galvanize sufficient support for filibuster reform, there are signs that the dynamic may be shifting.

President Biden, a longtime defender of the filibuster, suggested in a town hall last month that it might be time to “fundamentally alter the filibuster.” Previous filibuster defenders Senators Angus King and Jon Tester have come around to the necessity of filibuster reform. And, although we’ve heard nothing from pivotal Senator Joe Manchin this week, the logic of his public position on voting-rights legislation—both that it is badly needed, and that it should be achieved through bipartisan legislation—is rapidly eroding, as virtually all Senate Republicans increasingly show themselves opposed to any legislation that would remove barriers to voting. This latest filibuster, of the John Lewis Voting Rights Advancement Act, which would restore important protections against racial discrimination in voting that have been gutted by the Supreme Court over the past decade, should come as a wake-up call.

For those who want to see meaningful legislation to protect voting, but who are not ready to support outright abolition of the filibuster, a reframing might be useful. Passing the John Lewis Voting Rights Advancement Act or other democracy-enhancing legislation doesn’t require a wholesale elimination of the filibuster, or any fundamental change to the Senate’s rules or its character. It just requires understanding that Senate voting procedure is already an uneven patchwork.

Budget bills passed through reconciliation require only 51 votes. Confirmations—of executive-branch officials up to and including the Cabinet, and of federal judges up to and including justices of the Supreme Court—require only 51 votes. These are extraordinarily consequential aspects of the Senate’s work, and their existence and acceptance are fatal to the claim that today’s Senate is fundamentally a supermajority body. All the Senate needs to do is to create one additional exception—for democracy-enhancing legislation designed to protect and facilitate voting.

The rule changes that allowed for simple-majority passage of budget reconciliation bills, on the one hand, and the confirmation of nominees, on the other, came about in very different ways, and under very different circumstances. Today’s reconciliation process is a creature of statute, the 1974 Congressional Budget and Impoundment Control Act, which was passed to create an orderly budget process, and in response to some of President Nixon’s abuses. The change to the voting rules for nominees came about through simple Senate voting procedures, first under Democrat Harry Reid, then Republican Mitch McConnell, after years of increasingly partisan responses to presidential nominees.

These two exceptions, though critical, are by no means the only exceptions to the Senate’s general supermajority voting rules. Trade deals since the 1970s have often been exempt from ordinary amendment and filibuster practice. The Congressional Review Act allows for congressional disapproval of major regulations without any opportunity for filibuster. Again, each of these is unique. But each represents a normative judgment that the Senate’s supermajority voting rules are the default position, not an inviolable requirement, and that some circumstances warrant deviating from that default.

In normal times, there would be far more than 60 votes for what should be a nonpartisan and thoroughly uncontroversial set of propositions encompassed within the most recent two voting rights bills: that all eligible voters should have a meaningful opportunity to cast a ballot; that voting restrictions should not fall disproportionately on voters of color. Indeed, when the Voting Rights Act was last reauthorized, in 2006, it was approved unanimously in the Senate and then signed into law by President George W. Bush.

Justice Elena Kagan’s dissent in July’s Brnovich v. DNC, in which the Court dramatically limited the force of the Voting Rights Act, described the Act as “a statute that stands as a monument to America’s greatness, and protects against its basest impulses.” If the Senate cannot pass bipartisan legislation to advance these principles under its current default voting rules, the majority of Senators who do support these basic precepts of democracy should change the rules to allow voting reform to be passed through majority vote.

This could be done by a simple majority vote that would allow an exception to the Senate’s current default 60-vote requirement in a narrow set of circumstances: where Congress acts to facilitate participation by eligible voters, and to eliminate barriers to voting. Congress has the clear power to protect voting rights under the 15th Amendment, which explicitly empowers Congress to enforce its prohibition on denying or abridging the vote on account of race; it is also empowered under the 14th Amendment, which prohibits denying to any person the equal protection of the laws, as well as the Elections Clause, which gives Congress broad power to regulate federal elections.

Read More: We Must Reclaim Voting Rights as a Moral Issue

Of course, any voting-rights legislation could well end up in front of a Supreme Court that has already shown its hostility to democracy, with results that are hard to predict. But at worst, a Supreme Court decision invalidating any federal voting-rights legislation would merely restore the status quo. A rule change of this sort might also be used by a future GOP-controlled Senate to justify creating additional Senate rule changes, and perhaps abolishing the filibuster altogether. But that could happen anyway, even without the Senate acting to allow a majority to pass democracy reform.

As a matter of timing, it may well make sense to table additional efforts at voting legislation until President Biden’s infrastructure package finally passes. But when the Senate turns back to democracy reform, decision-makers should be clear-eyed about the framework in which they’re operating. The Senate’s voting procedures already contain many exceptions; this proposal wouldn’t change the fundamental character of the Senate any more than previous rule changes. But this is a perilous moment for our nation, and a majority of Senators can meet that moment with a narrow fix that’s our best shot at preserving a meaningful democracy. 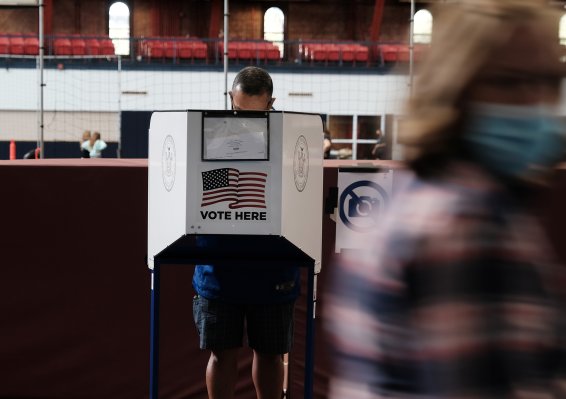 This Voting System Might Help U.S. Democracy
Next Up: Editor's Pick