In many ways, the United States Senate is an anachronism left over from a time when thirteen colonies were independent sovereign nations. The Senate was created as a representative of those entities, not of the people. Today, however, at a time when our very democracy is at risk, the Senate serves as a roadblock to the American people’s ability to have their will realized.

The survival of our democracy is under attack, and the Senate threatens the ability of Americans to see their views acted upon. This is not what the Constitution, nor the Framers, contemplated.

I was elected to the Maryland State Senate in 1966. That was the indirect result of two profound Supreme Court cases: one decided in 1962 (Baker v. Carr) and one decided in 1965 (Reynolds v. Sims). The first decision said that the lower houses of every state had to be apportioned based on population—not geography. The central premise being “one man, one vote.” The second case held that both state houses and state senates must reflect populations not geographical subdivisions—in other words, “people, not trees.”

Before these two decisions, it was common for states to diverge widely in the voting power of different residents, depending on where they lived. In another case, also in 1964, Wesberry v. Sanders, the Court applied the “one man, one vote” requirement to the U.S. House of Representatives.

As a result of those decisions, Prince George’s County, where I lived, received four additional senators. Up to that time, each of our twenty-three counties had one senator, which meant that Maryland’s smallest county, Kent County, with 15,481 people in 1960, had as many senators as Prince George’s County, with 357,395. I was elected to one of the new seats created to address that unjust imbalance.

In the cases I’ve mentioned, the Supreme Court found that it was a violation of the Constitution’s Equal Protection Clause not to have “substantially equal legislative representation for all citizens in a state regardless of where they live.” That principle applied to state legislatures and the U.S. House of Representatives. It did not apply, however, to the U.S. Senate.

That’s because the Senate’s makeup had been determined not by fairness, but by a political deal between thirteen sovereign entities that they would be represented equally in the Senate. While that agreement was included in the Constitution, it is, nevertheless, as much in violation of the “one man, one vote” principle as were the state legislatures before the Court’s rulings in the 1960’s.

Notwithstanding the Seventeenth Amendment, the Senate cannot now be called a representative body of the people. Voters in Wyoming are almost eighty-times more powerful than their fellow citizens in California—an egregious violation of the sacred principle of equal protection. Seventy-five Senate seats represent about 40% of the population!

To compound that inequality, the Senate has adopted rules and customs that make the majority even less able to work its will. As a result of the Senate’s much-abused filibuster rule and the fact that a single Senator can impede action with a “hold,” one Senator from any state can effectively veto the actions of the entire body.

The filibuster defies the clear intent of the Constitution and its writers—and of the almost universal legislative practice that “the majority rules.” In fact, James Madison, in Federalist 58, in response to a suggestion that more than a majority be required, said: “In all cases where justice or the general good might require new laws to be passed, or active measures to be pursued, the fundamental principle of free government would be reversed.”

And, in Federalist 22, Alexander Hamilton said: “What at first sight may seem a remedy, is, in reality, a poison. To give a minority a negative upon the majority (which is always the case where more than a majority is requisite to a decision), is, in its tendency, to subject the sense of the greater number to that of the lesser.”

The writers of the Constitution clearly contemplated that there were times that extraordinary majorities would be called for: 1) amending the Constitution; 2) impeaching a president or other office holders; 3) approving a treaty negotiated by the executive; and 4) overriding a veto by a president. However, the drafters of the Constitution discussed but did not include a provision for the passage of legislation to need more than a majority vote. Therefore, I believe the filibuster to be an unconstitutional requirement for more than a majority to pass legislation.

The Senate has considered itself to be the “greatest deliberative body.” They have, however, become the most non-deliberative body. And, in recent decades, they don’t even discuss (i.e. filibuster) their reasons for opposition.

The House has many times sent to the Senate legislation supported by large majorities of the American people and a majority of the U.S. Senate—only to see its consideration blocked. Just last week, the minority in the Senate refused to even debate critical voting rights legislation, the Freedom to Vote Act. From raising the minimum wage to securing equal pay to enacting commonsense gun reforms, the minority regularly blocks any consideration whatsoever.

Surely, the Founders had no such intent for legislation to be frozen. They clearly believed the majority would rule, not just in the House but in the Senate as well.

The Senate should become a democratic body, even if not a representative one, and honor the principle of majority rule. Let the people’s voices not be silenced by a minority.

I would urge my colleagues in the Senate to eliminate Rule XXII, which allows a filibuster (feigned or real) to silence the majority. The premise that such a rule is necessary as some kind of check and balance fails to understand that good principle. It is the legislature that checks the executive, who checks the legislature by the veto, and Supreme Court who checks both on behalf of the Constitution and the minority.

If the Senate Minority has veto power over the Senate Majority, our democracy is upside down, and there is real danger that Americans will conclude their democracy is broken. That has happened too often around the world. We must not let it happen here. 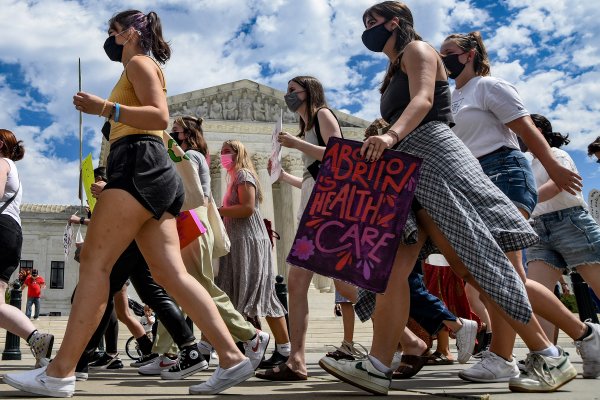 What We Fear in the Wake of the Texas Abortion Law
Next Up: Editor's Pick