Why the Filibuster Defenders' Ranks Are Shrinking

Sen. Strom Thurmond speaks with reporters after ending the longest filibuster on record — a 24-hour, 18-minute talkathon against the Civil Rights Act of 1957 in the Senate Chamber — Washington, D.C. on Aug. 29, 1957.
Bettmann Archive/Getty Images
By Philip Elliott

In Mr. Smith Goes to Washington, the fictional Sen. Jeff Smith stood for more than a day in the well of the Senate in what is probably the best known filibuster in history, holding the floor “almost until Doomsday” to expose D.C. shadiness. These days in real-life Washington, any Senator can similarly shut down the Senate floor for less noble causes, and all it takes is an email to colleagues letting them know that, if given the chance, he or she will rise in the chamber to voice an objection.

Which is why a frustrated Washington is considering changes to the Senate’s filibuster, the process by which a lone Senator can jam the schedule and derail any piece of legislation with the mere threat of a protest. The filibuster is essentially an open-ended objection to a bill that ends only when at least 60 votes say it’s time to move on. And in the modern era, it can be done with as little as a tweet. The filibuster has become an incredibly effective tool for the minority to prevent bills from advancing. Getting rid of or tweaking the rule could give Democrats and their barest of majorities the ability to govern for the next two years. But it also stands to threaten the norms of the Senate for a generation. If you think Republicans won’t retaliate tenfold for such an aggressive change, then you haven’t been paying attention to D.C. for some time.

The filibuster, in its idealized telling, preserves the right of the political minority to slow legislation and to force lawmakers to at least reconsider their postures. In practice, though, it’s a mechanism that allows a lone obstinate voice to deny the majority the ability to govern. And as Sen. Rand Paul has shown his fellow Republicans, the filibuster can also come from inside the majority.

Historically, the filibuster has been providence for segregationists to block civil rights legislation, for Big Business to stymie environmental policy and for the opposition to kill consequential nominations. It’s usually an emotional response in opposition to something that has public support. If you know a proposal or nomination is sufficiently popular to win on a straight up-or-down vote, the filibuster is your last line of defense to stop it.

Democrats are realizing that Republicans are unlikely to join them in much of anything. For instance, earlier today President Joe Biden signed an unusually popular $1.9 trillion pandemic-relief package that provides for vaccines, school funding, stimulus checks to Americans and more money for Main Street. It passed without a single Republican vote in a process that can only be used in very narrow circumstances. For anything else, Democrats are going to need 60 votes, and they simply don’t have them. It’s why former hold-outs like Senators Amy Klobuchar, Tina Smith and Jon Tester are no longer defending the institution as sacrosanct.

Procedurally, there are a handful of ways that Democrats could scrap the process. The filibuster is not found in the Constitution, so it’s a fairly easy thing to remedy in-house. If Senators created the rules, then Senators can destroy them, too.

The Senate, in its enduring love of process, specifies eight distinct ways to change any procedure and some are more straightforward than others. The most permanent option to change the filibuster would be to change the rule that requires 60 votes to proceed with most Senate business, but that would ironically require two-thirds of the Senate to scrap, and Republicans won’t go for it.

Another option is to only do bills that can’t be filibustered through a budget loophole, and then to ignore the nonpartisan Senate parliamentarian who says lawmakers are playing a dangerous game in loading up budget bills with extraneous provisions, an option we’ve considered here in the past.

But the path that has D.C.’s attention at the moment could be quick and lethal. Instead of changing the rule, the Senate could set a new precedent. (That’s right, if the Senate wants to create a precedent out of thin air, it can. It’s how Democrats in 2013 and Republicans in 2017 limited the ability to filibuster on judicial nominations.) Popularly known as “the nuclear option,” it’s harsh and politically poisonous. But it is damned efficient.

How would this work? With just 50 votes plus Vice President Kamala Harris’ tie-breaking voice, Democrats could spike the filibuster in about an hour. Per a very helpful primer that the centrist Brookings Institution updated earlier this year, the process starts with a single Senator raising a point of order, a.k.a., “Are we doing this right?” in normal-speak. If the person sitting atop the Senate and wielding the gavel says no, then they can start operating another way. If any other Senator objects, the person with the gavel can put it to a floor vote, and if 50 votes plus the VP agree with the change, it’s game-on for a bare majority to run the floor.

Sounds simple enough, but it’s not known as “the nuclear option” for no reason. Once triggered, it sets off a chain of explosive reactions, and no one in the current Senate is a nuclear physicist to understand what comes next. The ensuing chaos could be no less than a one-party body that needs to heed none of the concerns of the minority party. And, here, Democrats like Joe Manchin and Kyrsten Sinema are careful to note that a Democratic majority is not permanent.

Nevertheless, some progressives who want action now are in favor of this option, ignoring the risk of intemperate use of power down the line. As a half-step toward that, others are calling a “partial nuke” or a “mini-nuke.” In that scenario, the filibuster would survive, but it could only be deployed after the Senate starts debating legislation, not preemptively. That would help in at least starting the debate. Critics of this move say it does little good to start a debate — and the corresponding countdown clock of 30 hours — if a lone voice can still filibuster on amendments and on final passage.

But the idea that seems to have captured the most support at the moment is to force the filibuster-starter to actually hold the floor, as Mr. Smith did in that idealistic portrayal of Washington — or as Sen. Strom Thurmond did for a record 24 hours and 18 minutes to block the Civil Rights Act of 1957. The thinking here is that if a Senator wants to filibuster, he needs to do more than press send on a tweet.

Ultimately, it takes the will of the Senate to do any of this. And at the moment, frustration is not the same as will. Until all 50 Democrats move — and assuming Harris as Vice President doesn’t share Biden’s desire to preserve the filibuster — there’s nothing for the Upper Chamber’s majority to do but read government studies and think tank reports on what options they might have. Absent a willingness to rewrite the rules, much of the Democrats’ agenda will land in the Senate inert. And in the Senate, inaction is its own form of Doomsday. 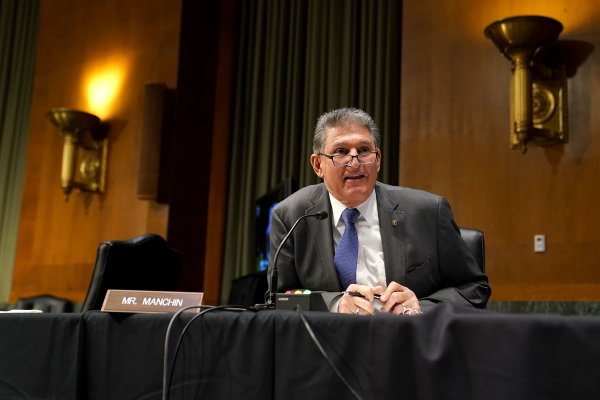 Joe Manchin in the Middle
Next Up: Editor's Pick