The local election office in Lynchburg, Virginia, has been tense for weeks. That’s partly because the gubernatorial race between Democrat Terry McAuliffe and Republican Glenn Youngkin has evolved into a neck-and-neck contest that both national parties are watching closely to divine their fortunes in next year’s midterms.

It’s also because the office has been inundated with GOP poll watchers, who signed up in unprecedented numbers this year to observe voting in the state’s Nov. 2 election, says the city’s director of elections, Christine Gibbons. “We feel like we’re being harassed and hindered in being able to do our daily work,” she says.

Last year, Lynchburg didn’t have any poll watchers during its early voting period, according to Gibbons. Then President Joe Biden flipped Lynchburg, a longtime Republican stronghold, beating out Donald Trump. This year, the city has had a poll watcher in their office every day since early voting began on Sept. 17. Most of them have been Republican, Gibbons says, and many have had “preconceived ideas about the voting process.” One GOP poll watcher, who was later removed, accused her staff of stealing the election from Trump, she recalls. “Our office has been on edge.”

Poll watchers, individuals who are often appointed by political parties to observe election proceedings, are a regular feature of most American elections. Both Democrats and Republicans send poll watchers to observe the voting process, make sure votes are counted correctly and report any irregularities to local officials.

But in the last year, the push for more poll watchers to closely observe elections has become a more prominent strategy of local, state and national branches of the Republican Party, which says they are imperative to ensure transparency in the voting process. In Virginia alone, the Republican National Committee (RNC) says that it has so far trained 3,500 prospective poll watchers this year. Observers expect that the spike in poll watcher numbers seen in Virginia could be replicated in races during next year’s midterms, sparking concerns about the new recruits’ neutrality and potential interference with election officials’ work.

The RNC encourages supporters to become poll watchers as one of the core tenets of its election integrity platform, which was launched during the 2020 race and has expanded to multiple states after Trump’s false claims that the presidential election was rigged. Until 2018, a consent decree resulting from a case in which Democrats sued the RNC over alleged voter intimidation in a New Jersey governor’s race prevented the GOP from working with poll watchers for 38 years. Last year, RNC Chairwoman Ronna McDaniel wrote in a Washington Post Op-Ed that the 2020 presidential race would be the first time in decades the Republican party could deploy an “army of poll watchers” the same way that Democrats do.

Youngkin, the Republican candidate in Virginia’s race, has embraced election integrity as a theme in his own campaign. Before securing his nomination, he refused to say whether Biden’s election was legitimate, though he has since acknowledged the president’s victory. He has personally expressed doubts about Virginia’s electoral process, and in particular whether voting machines can be trusted. Virginia state Sen. Amanda Chase, a close ally of Youngkin, said in an Oct. 27 interview with Real America’s Voice that if Youngkin lost it would be because “Democrats are committing election fraud.” Trump has also waded in, saying on Monday that he does not believe “in the integrity of Virginia’s elections.”

Sean Rastatter, Fairfax County’s GOP’s first vice chairman, says the county recruited more than 800 poll watchers this year — a “significantly larger” number than years before. The 2020 election helped spur that increase, Rastatter says, but he thinks there’s also a broader interest among people who sign up to ensure votes are counted accurately. “At a minimum, poll watchers will be able to investigate, find something that’s suspicious and then send that up to the chain so we can determine whether that’s fraud,” he says.

Conservative groups like the Virginia Project, which works to mobilize Republicans but is not part of the official party apparatus, have also hosted virtual trainings on how to become a poll watcher and how to look for fraud. Ned Jones, the election integrity director for the Virginia Project, tells TIME that their trainings have probably been attended by about 400 people across the state. “I don’t think that poll watchers prevent fraud,” Jones says. “They’re just observing and questioning things that don’t look right.”

Some question whether this new crop of poll watchers will be impartial witnesses. Many Republicans have started signing up to become poll watchers because they have been motivated by their belief in “the big steal,” says Daniel Ortiz, a law professor at the University of Virginia. While it’s entirely possible for the new recruits to set aside their political beliefs while on the job, Ortiz says he is nevertheless concerned. “You worry that people who seem to be part of almost a cult, who believe things in spite of the facts, might not do their job properly,” he says.

Ortiz expects that the GOP push for poll watchers will continue into next year ahead of the midterms, unless it somehow backfires due to violent incidents at the polls or there is a clear shift away from Trump’s narrative that Biden stole the 2020 election. “Otherwise we’ll definitely see it again—maybe bigger,” he says.

Democrats, too, are skeptical, though they, too, have sent poll watchers to observe in this election. “The reason you’re seeing this escalation right now, this explosion of interest in—quote unquote poll watching—is all based on Trump’s conspiracy theories,” says a spokesperson for Virginia’s Democratic party.

Others are simply worried the heightened numbers could be distracting. “My hope is that this uptick in poll watchers won’t frustrate or fluster our election officials while they’re trying to do their job,” says Alexandria Bratton, senior program manager at the Virginia Civic Engagement Table, which sent nonpartisan volunteers spread across 200 polling sites on Tuesday who are trained on reporting any irregularities, including actions of poll watchers. As of Tuesday afternoon they had not received reports of any hostile encounters related to poll watching.

Some local election officials in Virginia seem unphased by the influx. In Albemarle County, where Charlottesville is located, director of elections Richard Washburne says he, too, has seen more poll watchers in the run-up to this Nov. 2 than he has ever seen before. But this year, every single day, he says there has been at least one Democratic poll watcher and one Republican poll watcher for early in-person voting.

“I guess a lot of questions are raised about the integrity of our elections and both parties want to be able to look over things,” he says. So far, they haven’t caused any trouble, though his office did have to ask two of them to leave because they refused to wear a mask.

For Gibbons, the election official in Lynchburg, the tense election day atmosphere feels familiar. Last November, on the morning of the presidential election, she found a big banner outside her home saying that she should go to jail. “We’re all trying to do our jobs as election officials,” Gibbons says. “We are doing the best we can to follow election laws and it’s disheartening to see fellow citizens questioning and not trusting that we do have fair elections.” 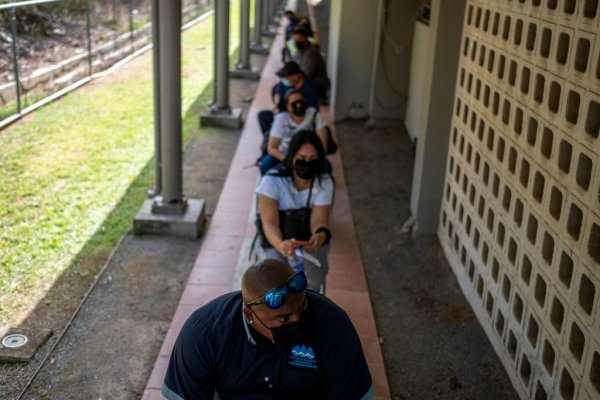 How Puerto Rico Depoliticized the COVID-19 Vaccine
Next Up: Editor's Pick