Suddenly, Everyone We See on TV Is Very Rich or Very Poor. What Happened?

Succession is back, and with it the complicated pleasures of watching an obscenely rich, morally odious family scream and scheme and feud its way through some of the most exclusive spaces on earth. While 2019’s Season 2 finale found the show’s fractious, Murdoch-like Roy clan managing a crisis in their cruise division while drifting around the Mediterranean in a yacht the size of a city block, the Season 3 premiere, airing Oct. 17 on HBO, hinges on private planes.

Only a tiny fraction of fans will ever experience such luxury, which is part of why we watch. But at a time when massive wealth often reeks of corruption, it’s easier to vicariously enjoy TV characters’ lush lifestyles when those characters are incapable of enjoying anything themselves. While filming in Tuscany, Jeremy Strong, who plays volatile Kendall Roy, explained to a reporter that the Roys have “a desensitization to things that you or I might feel.”

The same is generally true of the characters who populate this year’s many shows about the private-jet set. In HBO’s sleeper summer hit The White Lotus, VIP guests at an exclusive Hawaii resort torment each other as well as staff. Hulu’s Nine Perfect Strangers sends soul-sick elites to a terrifying high-end wellness resort. Even in the kind of soap that once existed to revel in excess, like HBO Max’s Gossip Girl reboot or Fox’s Our Kind of People, only villains now have uncomplicated relationships to their fortunes.

If TV these days is bent on critiquing the ultrawealthy, it’s also invested in portraying the plight of the very poor. The past few months have brought Showtime’s American Rust, a dreary Rust Belt crime drama that opens with its central family on the verge of losing their decrepit home; Netflix’s Maid, about a young mom who finds herself suddenly homeless; and FX’s Reservation Dogs, a dark comedy set on an Oklahoma reservation where deaths of despair have become infuriatingly normalized.

On Oct. 13, Hulu will debut Dopesick, a docudrama on the opioid crisis that captures both ends of TV’s socioeconomic spectrum. At one extreme is the multibillionaire Sackler family, now synonymous with the ravages of its company Purdue Pharma’s signature drug, OxyContin. In a scene straight out of Succession, one elderly Sackler brother lunges at another in the family’s eponymous wing at the Met. Meanwhile, in Appalachia, a closeted lesbian coal miner (Kaitlyn Dever) injures herself on the job, gets prescribed a supposed miracle drug and spirals into addiction.

Dopesick throws into relief how economically polarized realistic TV—that is, TV set in the here and now rather than in stardate 76000 or Westeros—has become. This trend is grounded in reality: Pew Research Center reported in January 2020 that the wealth gap between the richest 5% of Americans and everyone else doubled between 1989 and 2016. Then the pandemic hit, causing huge job losses among low-income workers as the wealthy benefited from Wall Street’s quick recovery. Yet there’s something ominous about the prospect of the vast majority of the population—everyone who lives above the poverty line but will never own an aircraft—disappearing from our screens. Where have TV’s middle classes gone?

It’s not that television lacks characters who are implicitly coded as middle class. A network prime-time schedule stripped of shows about doctors, lawyers and cops would have more holes than the case against the West Memphis Three. Dopesick also has its share of white collar professionals, from Michael Keaton as a rural physician to Will Poulter as a Purdue sales rep to Rosario Dawson as a DEA agent. But while the miniseries lingers on the disparity in lifestyles between the Sacklers and the mining family, scenes that follow these middle- and upper-middle-class characters almost always center on their work.

As in any procedural, their personal lives remain mostly in the margins. With This Is Us an exception that proves the rule, dramas about middle-income families or communities—think Six Feet Under, thirtysomething, Friday Night Lights—have become vanishingly rare. Game of Thrones created a market for genre epics, and perhaps in order to stay competitive, new realistic dramas, whether they’re procedurals or soaps, spotlight characters whose daily lives are somehow extreme: billionaires, women in prison, CIA agents. When Disney+ has superheroes and Netflix has The Witcher, who’s going to buy a pilot about an interfaith marriage?

Comedies have historically been more hospitable to such characters. Most traditional sitcoms take place in a living room, a white collar workplace or at the hangout of a group of friends. One of the biggest comedies of the 21st century, The Office, follows desk jockeys at a paper company; another, The Big Bang Theory, takes viewers inside the apartment of some nerdy roommates. The entertainment comes not from the setting, but out of the rapport among the characters.

Such has been the appeal of sitcoms since the rise of television after World War II. From the working-class Honeymooners to the middle-class suburban idyll epitomized by Father Knows Best, The Donna Reed Show and many more, TV offered familiar, if pithier or more wholesome, representations of regular American families. Of course, that norm was overwhelmingly white, straight, Christian and patriarchal. But in the decades since, sitcoms broadened to include—and help normalize—people of all identities. Workplace and hangout comedies came along, too, featuring characters for whom domestic life wasn’t the be-all and end-all.

Recently, however, the audience for realistic comedies has shrunk. There are many reasons for this, not all depressing. Along with siphoning off viewers from the networks where these shows once thrived, the streaming era has favored higher-concept humor. Comedies that cut through the Peak TV noise are surreal like Atlanta, allegorical like The Good Place, supernatural like What We Do in the Shadows. Even Ted Lasso, the rare noteworthy sitcom that could be described as realistic, is an aspirational pro-sports fantasy based on pre-existing intellectual property.

What we’re left with are not just stories about two diametrically opposed demographics, but also stories whose range of tones is severely limited. We love to hate the megarich, whose rarefied lifestyles nonetheless pique our curiosity, and so they are portrayed as cruel, ridiculous, broken. And we love to feel that we’re helping the less fortunate—as long as theirs is what Maid memoirist Stephanie Land has called “the palatable kind of poor-person story.” The best of these shows are truly empathetic, like Maid and Reservation Dogs; the worst, like American Rust, are steeped in pity and condescension.

Please understand: I am as invested in Succession as anyone. Many of my other favorite recent shows fall on one side of the rich/poor binary. And I appreciate that issues of economic justice are getting long-overdue attention on American TV. (This is the laudable aim of Dopesick, and though the miniseries doesn’t quite work, it’s because the scripts favor educating viewers over fleshing out characters, not because it dares to connect the Sacklers’ prosperity with poor people’s suffering.) In a broader sense, one of the best arguments for TV has always been that it brings experiences different from our own right into our (rented or mortgaged) homes.

What’s worrisome is my growing sense that an internet-flattened public square has eroded our collective understanding of other people as, much like ourselves, neither wholly good nor wholly wicked. You see it on social media and in celebrity culture every day: this dehumanizing insistence on crowning heroes and vanquishing villains, leaving no room for personal growth. In aggregate, TV that’s polarized along class lines, and thus in practice along moral lines, only exacerbates this allergy to nuance.

Our responses to fictional characters shouldn’t always be cheers or boos, derision or pity, stan or cancel. But that’s tough when their experiences are so often represented as exotic. Art should spark recognition and introspection, even as it opens us up to other ways of life. TV can do justice to a rapidly shifting socioeconomic reality without prematurely cutting out the realities of so many who are watching. 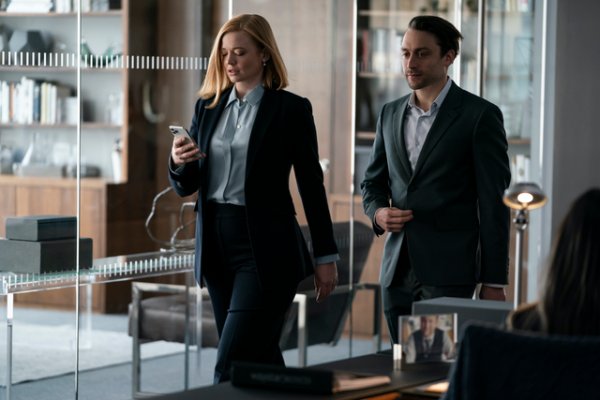 The Only Succession Recap You Need Before Season 3 Starts
Next Up: Editor's Pick