The Good Place always sounded like a match made in TV heaven: Beloved star Kristen Bell. Comedy veteran Ted Danson. And creator Mike Schur, a prolific writer and producer who’d made his name as a driving force behind acclaimed sitcoms The Office, Parks and Recreation and Brooklyn Nine-Nine.

As we approach the end of its four-season run, however, it’s clear the show was a gamble for all involved–including NBC, which believed in Schur enough to let him run with a wild idea. Though trailers suggested a fantastical take on his typical bighearted ensemble comedies, The Good Place quickly revealed itself to be a very funny but also quite earnest disquisition on moral philosophy.

The saga begins with Bell’s Eleanor Shellstrop opening her eyes outside the office of the avuncular Michael (Danson). She has died and gone to the Good Place, he explains. As an “architect” in this quasisecular heaven, one inhabited by only the purest human souls, he’s built a neighborhood of froyo shops and dream houses where she’ll spend eternity with her soul mate, philosophy professor Chidi Anagonye (William Jackson Harper).

The rub is, she’s not supposed to be there. Eleanor is selfishness incarnate. So, is she morally obligated to tell Michael the truth, even if it means condemning herself to the Bad Place? How about Chidi? Does it change anything when, in the final moments of the premiere, her presence unleashes chaos upon the neighborhood? Then again, what if an eternity of torture isn’t the punishment that fits Eleanor’s relatively mundane crimes?

So begins the cascade of ethical dilemmas that catalyze her resolution to become a better person, in hopes of saving her soul. With Chidi as their teacher, and help from a scene-stealing omniscient afterlife Siri (D’Arcy Carden’s Janet), Eleanor and another possibly doomed couple (Jameela Jamil’s snobby Tahani and Manny Jacinto’s dim Jason) study moral philosophy. The show reboots itself often, as the characters discover that Michael’s poor excuse for heaven is actually a No Exit scenario and, eventually, that their quest for salvation will decide nothing less than the fate of humanity.

Though it never quite attracted the massive audiences or awards recognition it deserves, The Good Place will end its run (with a 90-minute finale airing Jan. 30) as one of the best TV shows of its time. While packing episodes of screen time with well-wrought jokes and devising twist after game-changing plot twist, Schur’s team has challenged viewers to grapple with big ideas and crafted a surprisingly sharp reading of human nature–one that’s neither overly naive nor wholly depressing–amid the moral crises of the Donald Trump era. It may also turn out to be the last great show to air on a broadcast network.

With its fast production cycles and constant demand for relevant script fodder, TV has a unique capacity to engage the cultural conversation as it happens–and creators are especially attuned to that potential in these hyper-politicized times. Climate anxiety haunted Game of Thrones. For years now, the Black Lives Matter movement has been inspiring shows that meditate on race and policing: Shots Fired, Seven Seconds, When They See Us. #MeToo brought reckonings with powerful men like Roger Ailes, Michael Jackson and R. Kelly. Immigration is the central theme of Freeform’s Party of Five reboot and the Apple TV+ anthology Little America.

TV is also grappling explicitly with the most polarizing character alive: our President. While late-night hosts, Saturday Night Live and parody shows like Our Cartoon President got repetitive years ago, even before his election win, Trump has been the bogeyman of dramas from Scandal to American Horror Story. Some of these portraits are entertaining, but few provide novel insight into a personality whose daily violations of political norms have turned pundits into broken records. And they don’t speak to the souls of viewers living in an era of widespread moral confusion.

That’s where The Good Place comes in. More than a sitcom with philosophical subtext, it exists specifically to explore, as Schur has put it, “what it means to be a good person.” Though the stakes keeps shifting, what has remained constant throughout its run are weekly demonstrations of how seemingly abstract ideas like utilitarianism, contractualism (whose urtext, Harvard professor emeritus T.M. Scanlon’s What We Owe to Each Other, gets frequent shoutouts) and Kant’s categorical imperative underpin every decision we make. When the show tackled Philippa Foot’s classic “trolley problem”–which asks whether it’s right to put one person in danger in order to save five–Michael conjured an actual speeding trolley.

Schur is hardly the only TV creator probing the nature of good and evil, right and wrong. Some of the best, most timely dramas of the late 2010s–Better Call Saul, Fargo, Watchmen–posed similar questions. Yet none has dared to write a prescription as explicit as the one The Good Place is now careering toward. In such complex times, it’s selfishness, complacency and a lack of empathy that make a genuinely bad person, Schur told BuzzFeed last fall: “What matters is that you’re trying.”

If The Good Place isn’t a total outlier in the vast matrix of Peak TV, which reportedly cranked out more than 500 scripted programs in 2019, it’s certainly the only show with such lofty ambitions still airing on a broadcast network. Over the past decade, viewers have abandoned the Big Five (NBC, CBS, ABC, Fox and the CW) in droves–first for cable, then streaming. Many of broadcasters’ most innovative creators, from Shonda Rhimes and Ryan Murphy to Damon Lindelof and Amy Sherman-Palladino, have followed. (Schur, by contrast, reupped with Universal Television, NBC’s production subsidiary, in a multiyear deal last March.) The vanguards of a younger cohort–Phoebe Waller-Bridge, Donald Glover, Issa Rae, Sam Esmail, BoJack Horseman’s Raphael Bob-Waksberg–essentially bypassed the networks entirely.

As a result, excellence is harder than ever to find on the Big Five. And though the overall shift has been gradual, the past few years have seen the networks’ few remaining standouts wrap up, only to be replaced by formulaic doctor and lawyer shows, saccharine family sitcoms and bland reality competitions. (Who’s excited for The Masked Dancer?) Whether it’s the result of their dependence on advertisers, fear of offending more conservative viewers who constitute a significant portion of their older audiences, or simply their longstanding tradition of catering to middle-of-the-road taste, broadcasters have seemed particularly averse to political controversy lately. CBS stalwart The Good Wife begat The Good Fight, but episodes of that great (and outspokenly anti-Trump) spin-off debut on pay platform CBS All Access. Like The Simpsons before it, Fox’s current adult-animation highlight Bob’s Burgers, now in its 10th season, is starting to show its age. The CW’s most inventive shows, Jane the Virgin and Crazy Ex-Girlfriend, ended their runs in 2019. Now, its youth-focused slate is all superheroes, reboots and Riverdale clones.

For decades, NBC was the gold standard for sitcoms. It had Seinfeld, 30 Rock, The Cosby Show, Sanford and Son, Cheers, Community and Schur’s shows. Without The Good Place, only the good but not groundbreaking Brooklyn Nine-Nine and Superstore will carry the torch. It remains to be seen whether Schur’s upcoming projects will appear on NBC, its soon-to-be-launched streaming service Peacock or elsewhere in the company’s multiplatform empire.

It’s probably not a coincidence that so many revivals of extraordinary network shows of the past–Arrested Development, Twin Peaks, Veronica Mars, The Twilight Zone–have turned up on cable and streaming, with their younger, more affluent audiences. (Meanwhile, ABC pandered to working-class viewers with the ill-fated decision to bring back Roseanne.) Even PBS is hemorrhaging beloved series: The Great British Baking Show is now on Netflix, and Sesame Street episodes premiere on HBO. We may have an excess of TV in 2020, but if you want the good stuff, you have to pay for it. That isn’t an option for everyone.

Maybe the devolution of free viewing options doesn’t seem like such a tragedy; anyone can borrow a book from a library, after all. But as TV cements its place as the predominant popular art form of our politically and economically polarized time, it matters that anyone with TV could watch The Good Place. As Schur put it in a speech at Notre Dame, “If television can’t make us better people, then nothing can.” 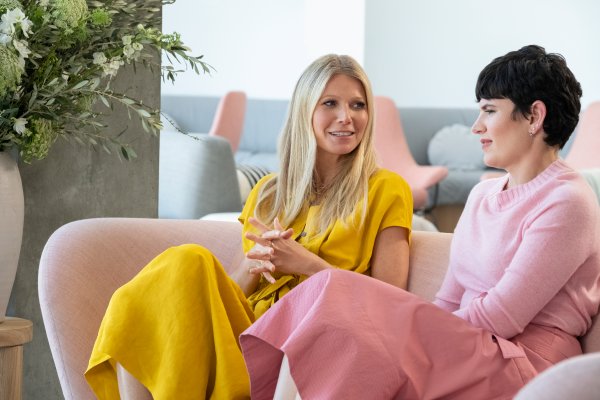 Gwyneth Paltrow’s Netflix Goop Show Is a High-End Infomercial Masquerading as an Investigative Docuseries
Next Up: Editor's Pick