In the opening scene of Netflix’s Maid, a young woman hastily straps her toddler into a carseat, kisses the girl’s forehead, takes the wheel of a creaky jalopy and, as a man screams “Hey, what are you doing?” from the driveway, peels out into the darkness. It’s an archetypal image—a victim of domestic violence flees her abuser—but one that recurs, hauntingly, throughout the series. Sometimes the escape takes place in daylight, or from another place, or in a different car, or mother and daughter aren’t alone in the vehicle. Over time, the cycle takes on a new meaning: there’s no such thing as safety when you have no money and no support system.

It’s not that the woman, Margaret Qualley’s Alex, is entirely alone in the world. But, as this poignant, layered and persuasive drama based on Stephanie Land’s best-selling memoir Maid: Hard Work, Low Pay, and a Mother’s Will to Survive so vividly illustrates, having friends and family doesn’t always mean having anyone you can count on. Which is why so many Americans must rely on social services when precarity swerves into crisis. A wrenching (though not unremittingly bleak) portrait of a 25-year-old mom who’s desperate to give her daughter a more stable childhood than she had, Maid, which comes to Netflix on Oct. 1, also demonstrates how the families our society refuses to help can get trapped in cycles of poverty and abuse.

The first place Alex goes after leaving the trailer where she played housewife to little Maddy’s (Rylea Nevaeh Whittet) alcoholic bartender father, Sean (Nick Robinson from A Teacher), is the home of the couple’s best friends—who immediately call Sean in a misguided attempt at peacemaking. Mother and daughter hit the road again, curling up together to sleep at a scenic overlook until a cop sends them to social services, because they can’t park here. It’s in that office where Alex explains to a social worker that staying with her family is “not an option.” Her mother, Paula (Qualley’s real mom Andie MacDowell, in a zany yet soulful performance), turns out to be a manic hippie artist, living in a camper van with a younger dude named Basil (Toby Levins) whose Australian accent Alex suspects is fake. And her dad, Hank (Billy Burke), an apparently nice guy who’s remarried with kids, is out of the picture for reasons we can only guess at first.

This is where the public safety net comes in, right? But even if Alex can be coaxed into admitting that she was being emotionally abused (Sean didn’t hit her or Maddy, but he did throw things, punch walls and control her access to money) and that she and her daughter are now homeless, none of her options seem sufficient. There might be some free beds at a church mission to which she’s told, ominously, to “wear DEET.” And that’s about it, because she doesn’t have any pay stubs that would qualify her for subsidized housing or childcare. “I need a job to prove that I need daycare in order to get a job?” Alex demands. “What kind of f-ckery is that?”

The social worker ultimately points her toward Value Maids, a shoestring operation that cuts corners by keeping employees part-time to avoid paying benefits and making them pay for most of their own expenses, from uniforms to cleaning supplies. Working with a majority-female team of writers and directors, showrunner Molly Smith Metzler (Orange Is the New Black) maintains viewers’ awareness of Alex’s dire financial straits by periodically printing her declining bank balance right on the screen. So we see that her first “clean” leaves her in the red even before the client—Anika Noni Rose’s snobby Regina, who comes to play a somewhat unfeasibly large role in Alex’s life—stiffs her.

A few more disasters and a fair bit of soul-searching later, she and Maddy wind up staying at a shelter for victims of domestic violence. The nonjudgmental, no-strings-attached care they get there, from the DV survivor (BJ Harrison’s Denise) who manages the place, feels bittersweet; it’s apparent that Alex has never really had her own needs catered to before. A neighbor at the shelter gives Maddy a big bag of sparkly My Little Pony dolls that another child left behind, and it’s as if they’ve won the lottery. It struck me, watching these scenes, that we almost never see shelters for abused women and children depicted on screen. Might that be the result of having a dearth of survivors and people from disadvantaged backgrounds working in creative roles, or of a lack of interest in this unglamorous sort of women’s story from the entertainment industry at large? Either way, it can be hard to imagine—or empathize with—experiences we haven’t seen.

Not that Maid is some kind of grim, didactic explainer on the plight of DV victims, poor women, single moms or any other demographic category into which one might slot Alex. Unlike Showtime’s recent, misery-drenched American Rust and so many other generic dramas about rural poverty, the show is grounded in a genuine sense of place—the forests, ferries and islands of the Pacific Northwest—and intimate knowledge, via Land’s book, of how the labyrinthine, interconnected legal and social-services systems can so profoundly fail the struggling people they’re supposed to aid. We observe the way Alex exasperates employers, daycare workers and grocery clerks by simply existing in her current, impossible state. Maddy “needs you to do better,” a doctor lectures her. “Parents do not get a day off,” sniffs the condescending instructor of a parenting class that Alex must take for legal reasons but could actually teach.

Despite a few hit-or-miss surreal touches, the series belongs in the same category as feminist-minded, social-realist features like Eliza Hittman’s Never Rarely Sometimes Always, Debra Granik’s Leave No Trace and Kelly Reichardt’s Wendy and Lucy. Like them, Maid’s greatest strength is its multidimensional characters. Alex is neither a saint nor a cypher; she’s an intelligent, self-possessed aspiring writer who is fiercely devoted to her child, but she also messes up, backslides, spirals. Qualley gives her a bright-eyed tenacity and a wry sense of humor (she names Maddy’s off-brand, dollar-store mermaid doll Schmariel). Protagonists battling psychological trauma have devolved into a trope, yet Metzler and the show’s directors avoid vagueness by translating Alex’s symptoms into discrete visual terms, from the muffled perception of someone who’s dissociating to the dark cave of depression. The people in her life become similarly complex. Sean and Paula can act like monsters, but they’re not evil so much as wounded and out of control. An old friend who wants to be Alex’s white knight (Raymond Ablack) isn’t quite the deus ex machina that a more simplistic show might make him out to be.

“People with money have everything,” Alex tells a Tinder date she hosts, in one episode, at a luxurious house that she pretends her parents own but which she is, of course, only cleaning. She has been through a lot in her short life, yet on this point she remains remarkably naive. In sorting through wealthy strangers’ detritus at work and imagining the pathos behind it, Alex not only becomes a worldlier person, but also finds her voice as an author. (That writerly style can sometimes bleed into the dialogue in slightly unfortunate ways, with characters speaking in overly metaphorical language.) It’s an important one. Raised on false welfare-queen stereotypes and bootstrapper self-reliance platitudes that have never solved anyone’s actual problems‚ we as a culture can be maddeningly incurious about lives like Alex’s. In taking care to show us complete people rather than dusting off the old clichés, Maid stands a chance of changing that. 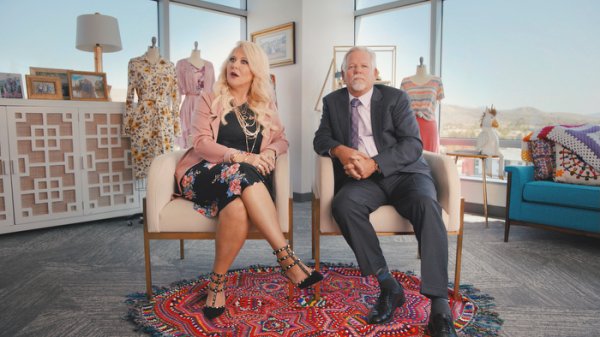 Amazon Docuseries LuLaRich Breaks Down the Chaotic Story of Deception Behind Multilevel Marketing Company LuLaRoe
Next Up: Editor's Pick