I Left Poverty After Writing 'Maid.' But Poverty Never Left Me

Ideas
By Stephanie Land
Stephanie Land is the author of Maid: Hard Work, Low Pay and a Mother's Will to Survive

I signed my first book contract without paying much attention to what it said. I didn’t know at the time that the book would be a best seller or that it would one day inspire a Netflix series. I just needed the money. I was a single mom with a 2-year-old and a 9-year-old, living in low-income housing, and because of a late paycheck, I hadn’t eaten much for a few weeks, subsisting on pizza I paid for with a check I knew would bounce.

This wasn’t my first bout of hunger. I had been on food stamps and several other kinds of government assistance since finding out I was pregnant with my older child. My life as a mother had been one of skipping meals, always saving the “good” food, like fresh fruit, for the kids I told myself deserved it more than I did. The apartment was my saving grace. Housing security, after being homeless and forced to move more than a dozen times, was what I needed the most. Hunger I was O.K. with, but the fear of losing the home where my children slept was enough to cause a mind-buzzing anxiety attack that wouldn’t let up.

Hunger changes you. As your body begins to claw at you, your stomach churning in anger, every person who shares a photo of the fancy meal they’re about to eat is no longer your friend. Around that time, a guy who had a crush on me kept texting me what he was making for dinner, and I finally had to ask him to stop without really explaining why.

When the advance money to write the book came, I wasn’t exactly “free” from poverty. I got a book deal that most writers, especially BIPOC writers, do not receive. It was an amount of money that didn’t seem real, so I always thought it would disappear as quickly as it came. I could fill my fridge again, but I had $20,000 in credit-card debt, a truck that kept breaking down and almost $50,000 in student loans. I had years of untreated complex PTSD and generalized anxiety disorder. All of our clothes, furnishings and towels were falling apart. Beyond that, mentally speaking, living in poverty is walking a tightrope over a floor that’s about to drop out from underneath you. Every time I felt like my head was finally just above water, when I had a day off to take my kids out for an afternoon, that’s when my car wouldn’t start. My brain had learned to be suspicious of good things. To almost fear them. As things started to feel more comfortable, the panic attacks screamed, When? When will the bad thing happen, because I know it’s there.

In the year leading up to publication of my book, I woke up in panic maybe 100 times. (By the time I was on book tour, it happened every morning at 4.) Every night, my anxiety seemed to come up with a new “what if” scenario based on what I’d been through as a freelance writer. I thought the trolls would catch wind and share photos of my kids on 4chan again, calling us names I will never repeat. As a single mother who had written about being on food stamps, I’d experienced enough death threats that I paid a service to keep my information off search engines. Now I had written an entire book about mothering my older kid when we had nothing, and I worried for their safety too.

When I started meeting people who had read my book, I was unprepared for their hugs and words of appreciation. People saw themselves in my story. It had been my hope, but not my expectation. As a shy introvert, I had no idea what to do but nod and say thank you. Then it started happening in grocery stores, and when I dropped my kindergartner off at school. I could usually spot them coming, but sometimes they surprised me. Like the time I heard, “Oh my God, are you Stephanie Land?” from the pharmacy clerk as I reached for a bag containing medication to assist my body’s first miscarriage.

I had moved to a house with a yard. My kids and I lived with a tall, handsome man I’d recently married, his daughter, and our mix of fish and dogs. I was never hungry. I could afford to purchase clothes that didn’t come from consignment stores or Target. What’s more, I had been pushed up to a different class of -society, one I had been mistreated by for most of my adult life. I no longer felt like I could be part of the community of people I’d worked beside, stood in line with to buy the cheapest burrito as our only meal for the day.

I was a “success story,” and an extremely likable one. I’m very conscious that my story is the palatable kind of poor-person story. There’s no doubt in my mind that people paid more attention to it because I am white, hold a bachelor’s degree, and even though my parents grew up poor, I was raised in three–bedroom, 2½-bath homes for most of my childhood.

After living in poverty for the previous decade, struggling to pay bills by cleaning poop off toilets, it jarred me to be treated as an equal by people who previously could have been my clients. At cocktail parties put on by my publisher or the organizer of a speaking event, I wanted to hang out with the caterers. I had tattooed the backs of my hands—what my tattooist called “the ever-lasting job -stopper”—to not blend in even more. On book tour, people asked over and over why someone like me had worked as a house cleaner. Some said, “Of course you made it out of poverty, but why do you think others can’t?” Some even said “won’t,” as if poverty is a decision people make when they wake up in the morning.

Not only did strangers hug me, but emails and direct messages started pouring in with highly personal questions often rooted in anger. Why didn’t you get an abortion? Do you really think what you experienced was abuse? What did all of this do to your children? One woman was obsessed with the kids’ mental health and kept messaging me that I should give them up for adoption. On a photo of my youngest, who was about 5 at the time, smiling while eating ice cream, someone commented how terrible it was to get pregnant when you can’t afford your kids. I had been off government assistance for three years.

Read more: After a Terrible Year for Women in the Economy, These Places Are Working Toward a Feminist Recovery From COVID-19

Over the past 18 months of being home during the pandemic, I have struggled to process why this has affected me in the way it has. I finally identified that it was going straight from the trauma of poverty to the trauma I discovered as a sudden public figure, then experiencing the biggest type of success a writer can at a time when people are dying and being evicted in droves. Some might call this survivor’s guilt, but that feels too simple to me. After my now 14-year-old and I watched the first two episodes of the Netflix series, they turned to me with tears in their eyes and said, “We made it out, but so many didn’t.”

When people tell me I deserve all of this, I tell them everyone does. When people tell me I earned this, I picture the machine that printed out so many copies of my book and know that it did so because I am that resilient, educated person whom most expect to be successful. I am Little Orphan Annie skipping around in new shoes, singing, “Yesterday was plain awful, but that’s not now, that’s then.” I’m the story we love to hear, and every time I speak to an audience, I point that out. It has become my purpose. But as my friend Rene Denfeld recently wrote on Facebook, “We live in a world that embraces the success story only because we are O.K. with the majority suffering.”

We need to look marginalized people in our community in the eye and listen to their stories of struggle, heartache and impossibility. We need to sit with the pain people in systemic poverty and systemic racism experience, especially because those two things go hand in hand. There are excellent books on this subject, like Ijeoma Oluo’s So You Want to Talk About Race. When people ask me how to help, I tell them to ask people what they need. I’m betting the answers are things like tampons and diapers and $10 for gas, because life is so small and short-sighted when you’re that hungry that you can’t demand affordable housing and a living wage. That’s for all of us who have means to fight for. 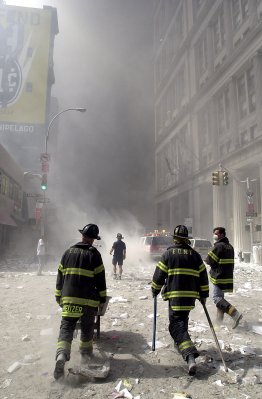 Steve Buscemi: Everyone Said ‘Never Forget’ 9/11. Some Have No Choice
Next Up: Editor's Pick