Is it even Halloween anymore if Netflix isn’t unveiling a hot new horror series from Mike Flanagan? Over the past few autumns, the writer-director behind the Stephen King movies Gerald’s Game and Doctor Sleep has contributed to TV’s small but growing horror canon with hit reimaginings of Shirley Jackson’s The Haunting of Hill House and Henry James’ The Turn of the Screw (rebranded as The Haunting of Bly Manor). This year’s offering, Midnight Mass, is an original story from Flanagan—one that has been on his mind for over a decade and centers on topics, like sobriety and the Catholic Church, to which he has an intense personal connection.

Like his previous projects, the seven-episode series, out Sept. 24, has some glaring flaws. The dialogue is often stagey, and every character, whether they’re a priest or a teen, seems to have the same tendency toward speechifying. While the lead actors—Zach Gilford, Kate Siegel and especially Hamish Linklater—are great, not all of the secondary performances are convincing. These two problems can exacerbate one another, to the extent that in some scenes it’s impossible to hear people speak without visualizing their words typed out in 12-pt. Courier font on a screenplay page. Yet after a slow first two episodes (pace being another common issue for not just Flanagan, but serialized horror in general), the show’s alchemy of spectacle, suspense and storytelling starts working. A binge becomes inevitable but also unexpectedly satisfying.

Set almost entirely on Crockett Island, pop. 127—the kind of windswept place where everyone wears flannel and Fair Isle sweaters, and it could be the ’50s if not for the cellphones—Midnight Mass begins with the arrival of two people to the remote fishing community. One is Riley Flynn (Gilford, bringing the same old-soul stoicism he brought to Friday Night Lights), a young man who grew up on the island and sought his fortune in Chicago, only to become an alcoholic and spend four years in prison for killing a teen girl in a drunk-driving accident. A former altar boy, Riley lost his faith in the aftermath of the crash; since then, his guilt has manifested in nightly visions of his victim, her head glowing in the places where shattered glass pierced her skin.

The community, depressed and whittled down from the hundreds-strong Crockett of his youth, knows all about what Riley did. So he’s a pariah, with no friends or job prospects or, really, reason to live. Even his own father resents having him around, sponging off a family that has so little to spare. Riley’s only confidant is his high-school sweetheart, Erin Greene (Siegel, a charismatic Flanagan regular who is also the creator’s wife). Another prodigal child, she returned to the island months earlier, pregnant, to occupy her dead mother’s home and vacant teaching position at the local schoolhouse. “Look at us,” Erin says to Riley, “back where we started. The one place we swore we’d never end up.”

Also freshly arrived is Father Paul Hill (Linklater, remarkably dynamic in a challenging role). An energetic middle-aged priest, Paul explains to the island church’s shrinking congregation that he’s been sent by the diocese to fill in for their octogenarian clergyman, Monsignor Pruitt, who fell ill during a pilgrimage to Jerusalem and is apparently recovering on the mainland. At his side is the officious Bev Keane (a chilling Samantha Sloyan, from Hill House), the prototypical timeless, ageless, practically bloodless church lady, dressed like an overgrown Girl Scout and always judging, scolding, guilting. Her role as self-appointed morality police isn’t the only thing that puts her at odds with new-ish sheriff Ali Hassan (Rahul Kohli), another outsider. Like many of Crockett’s overwhelmingly white, Catholic residents, she’s also a vocal Islamophobe.

What looks at first like a Rectify-style ex-con narrative transforms into something much stranger and, as promised, spookier by the end of the premiere, when the violent storm that the islanders have been preparing for finally hits. Apparitions appear in the rainy darkness. The next morning, dozens of dead cats wash up on the beach and, soon enough, occurrences that look a lot like miracles start happening within the congregation. Could there be a rational explanation for all these, er, spoilers, or does Father Paul really have the power of the Almighty at his fingertips?

There has been no shortage of horror with religious themes in the past several years. I guess it makes sense for a society that has spent much of that time nervously counting horsemen of the apocalypse. Catholicism, with its cinematic pageantry and its child sexual abuse turmoil, has been especially prominent in pop culture’s darker corners of late; think this fall’s new nun novels, FX’s Black Narcissus remake, Netflix’s pulpy comic-book adaptation Warrior Nun, fashion designer Dilara Findikoglu’s controversial juxtapositions of Catholicism and the occult and, of course, the money-minting machine we’re apparently calling The Conjuring Universe. While the simplest of these stories obsess over the eternal battle between good and evil, some of the more difficult, ambitious ones—like Paolo Sorrentino’s dazzlingly weird HBO miniseries diptych The Young Pope and The New Pope, as well as Paul Schrader’s harrowing film First Reformed—interrogate the role of an old faith in a world many believe to be beyond salvation.

Midnight Mass may not be a masterpiece on the level of those two works, in part because it spends so much time reveling in the eerie, gory, spectacularly twisty conventions of the horror genre. Flanagan is more concerned with entertaining—and in creating a distinctive, vivid social world on Crockett Island—than he is in blowing minds with the complexity of his narrative or the obscurity of his ideas. But neither does he oversimplify big questions surrounding faith, science, morality and mortality. With so many TV series these days delivering unasked-for lectures on how to be a person in the world, it’s refreshing that this one is content to surface issues and let the audience work through them organically. For all its clumsy monologuing, and despite a few side plots that feel like a stretch, the show mostly avoids pretense through grounded storytelling and coherent characters that gain depth and nuance with each episode.

It isn’t exactly black magic, this formula that Flanagan keeps refining. It’s just gotten surprisingly hard to find horror in any format that comes across as neither obvious nor opaque, neither brainless nor self-consciously “elevated,” neither didactic nor nihilistic in its underlying point of view. His shows are like islands in a storm—not always the cleanest or most elegant on the surface, but hearty, solid refuges nonetheless. And Midnight Mass is his best one yet. 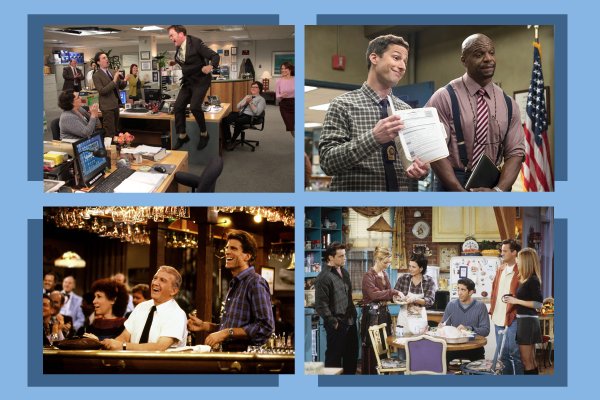 Pour One Out For the Network Comedy
Next Up: Editor's Pick